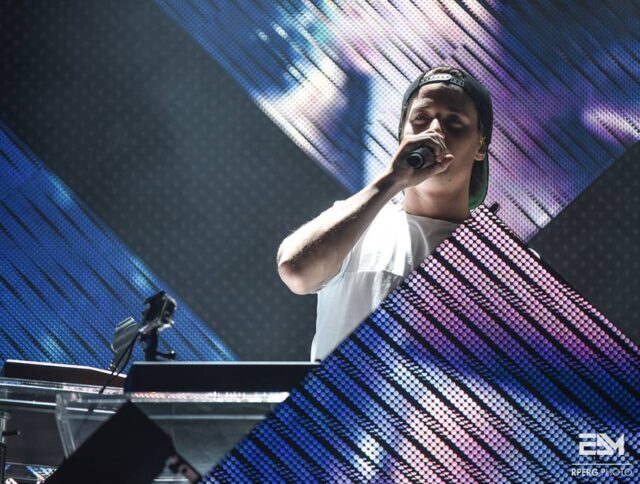 After what felt like an eternity of anticipation, the sold-out Navy Pier Festival Hall went black and the stage lit up with a video bouncing off a sheet and the sound of piano was coming out from behind, announcing that the final Cloud Nine Tour show had begun. When the sheet dropped, the crowd cheered as Kygo kicked off the night with his remix of Seinabo Sey’s “Younger.”

From that moment on, it was just one song flowing gracefully into the next. Aside from playing some covers like Syn Cole’s “Miami 82” and M83’s “Wait,\” Kygo played the hits we all know and love him for. However, unlike many electronic shows with pre-recorded vocals, he had some of the vocalists with him on stage. I didn\’t realize this right away but during \”Stay,\” I looked a bit closer and there was Maty Noyes.

Things got even more interesting when his remix of \”Sexual Healing\” was coming to a close and I heard another live voice. It was none other than the R&B legend, R. Kelly. I was so shocked that I turned to the guy next to me asking if what I was seeing was real. R. Kelly finished off the track then he and Kygo literally remixed the remix to \”Ignition\” on stage together. Check out the video below.

The energy of the crowd was as powerful as the music and when the music slowed down, the crowd did too. The acoustic version of \”Firestone\” was one of the songs leading up to the end and sent shivers down the spine of each and every one of us. The show ended with \”Stole the Show.\”

The setlist could not have been better and the lights and graphics accompanying each song were just as great. One of the things I really enjoyed throughout the night were the moments that Kygo was featured on the screens, playing the piano or one of the other instruments surrounding him. It was surreal to witness in person the very ways in which he is redefining electronic dance music.

Kygo will now go on to play the European half of the Cloud Nine Tour. If you have a chance to catch one of the shows, it is highly recommended.