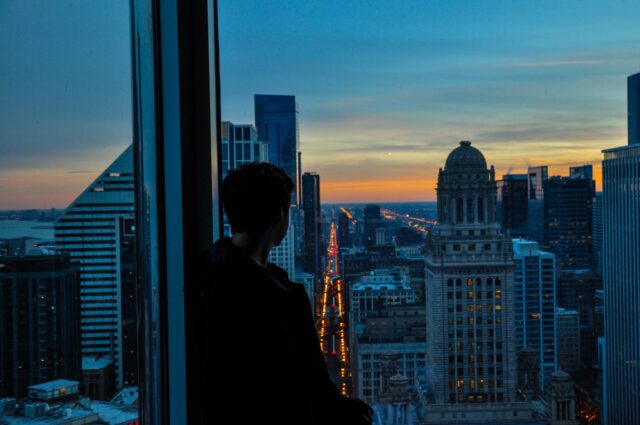 You may not have seen him at any festivals just yet, but Chicago-native Restless Modern is poised to become an influential name in electronic music. The producer attends Harvard University and juggles an intense workload with creating meaningful tracks with a unique sound. To have reached over 5 million streams on Spotify for his collaboration with LA singer-songwriter MOONZz “Navigator” is just a testament to his rising talent.

His latest track “I’m Okay” signals the artist’s multifaceted ability in solely producing, writing, and singing on the track. Not only is his musical talent showcased, but also his injection of soul and personal meaning into something he can share with the world. This is getting harder and harder to come by these days and is a refreshing take on producing.

I was able to gather Modern’s candid perspectives on his creating reflection-inducing music, his influences, and where he is going next. His passion for producing certainly transcends, and we are surely to be getting to know Restless Modern very soon.

Thanks so much for your time in this interview for EDM Chicago! Can you start out by talking a little bit about how you got into producing?

No problem, thanks for hosting!  One word: Skrillex.  I’m sure that’s an extremely common answer for the “what got you into producing” question, but it’s true.  I used to be a normie who would search the iTunes top 100 singles charts in order to find new music to listen to, and the infamous “Scary Monsters and Nice Sprites” came up on my radar.  I have to tell you, as embarrassing as it is, that I was legitimately afraid of that music.  It was extremely different and terrifying to me – so, naturally, I sought out as much of it as possible.  After hearing this kind of music, I decided that I would try my hand at making dubstep (which went very poorly) and things escalated from there.

Where do you draw your inspiration from in terms of your musical style?

The vast majority of what I listen to today is not really “EDM.”  With that being said, the fact that my foundation of production experience is based almost entirely off of Skrillex and Monstercat leads me to make some EDM-oriented decisions in the production process.  Some of my biggest inspirations include The 1975, Bon Iver, EDEN, blackbear, and others that people might not necessarily expect.  There are also some artists that I draw from on a mindset perspective as opposed to a musical perspective.  Childish Gambino would be a great example of that particular style of influence for me: while I don’t always vibe with his music, the fact that he continually pushes boundaries is something that I would like to emulate and improve on.

Your latest single, ‘I’m Okay’ came out November 10th – talk us through your creative process for it.

I’m Okay is a track that I produced, wrote, and sang myself.  It’s certainly not the first of its kind to exist on my hard drive, but it’s the first of its kind to pass the quality test and make it out into the world.  I’m Okay was born out of an internal frustration with my life and with the way things were going.  It’s about throwing your hands up and admitting that your life is a bit of a mess – it’s about accepting the terrifying things that you feel and acknowledging that they exist.  I had no idea who I was or what I was meant to be doing, and I was dealing with some very substantial anxiety/depression.  Still am.  Interestingly enough, the creative process behind the song was also incredibly frustrating.  I had to make seven or eight entirely different versions of the drop section in order to find something that I liked.  The song was important to me, so I put a lot of pressure on myself to make it work well.

Your recent track “Navigator” features LA singer/songwriter MOONZz and has been a huge success so far, how was working with the artist and receiving such a positive response?

Navigator involved an extremely long and difficult process that I don’t want to get into all the details about.  Just know that it took me well over a year from start to finish to get that song out, and a lot of that work came after we had the initial vocal idea.  Molly (MOONZz) and Cole/DJ (Opia) did an excellent job writing a hit song on top of my original instrumental, and then I did my best to kind of work with that base and create something that would do well on the “charts.”  That wasn’t originally my intention with the song, and it most certainly is not my intention with I’m Okay or any of my future music, but it was the case for Navigator.  So when it blew up on Spotify, everyone was super happy about it, but that had always been the plan.  It obviously feels great to have such a popular song out there, but I’m much more interested in making people self-reflect and move out of their comfort zone than I am in making more pop sing-along songs.

Your vocals were featured on a track by yitaku and Madnap – how was it switching gears and providing a different part of the track?

It felt great, actually.  I generally like to have total control over my music, as I did in the case of I’m Okay, but it was super refreshing to take off the “producer” hat and just worry about writing and performing the vocals.  I’ve always been a producer by necessity – you just have to be able to produce if you want to take ideas out of your head and manifest them in the world.  You can try and direct someone else or pick and choose beats, but it’s never going to be exactly how you imagined it.  Even when you’re the producer, it’s not going to be exactly how you want it to be, but you can get it a lot closer.  I think that vocal features also give me a little bit more flexibility in terms of the styles of music I get to work with – just because I can’t or don’t want to produce a particular style doesn’t mean I don’t want to lend vocals to those instrumentals.

Now, with your newest single I’m Okay, you wrote and performed all the vocals on the track – do you plan on doing more of your own vocals in upcoming songs?

As far as I can tell, there won’t be any more Restless Modern tracks that don’t feature my vocals.  Any features that I have on future tracks will be complementary to my own voice: this has always been the goal.  It just took me a bit longer to get my singing/songwriting up to par than it did to get the production side going.  When I write and perform my songs, I can get as close as possible to the vision that I have in my head.  I don’t want to dilute that.

Tons of music.  Single in early 2018, album in early 2018, and endless music after that.  I’m putting out content constantly now that I’ve got a repository built up, and I’m excited to see how people react.  Time to give people a much better idea of who Restless Modern is.