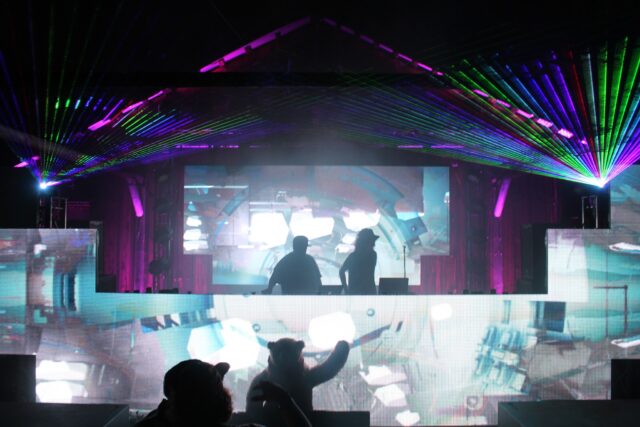 Something special occurred deep in the woods, in the neverland of Northern California on the weekend of August 12-14, 2016. Organic Fest 2016 turned into a modern-day Woodstock when their incredible lineup attracted way more people than they expected, turning the event into a free-for-all renegade festival for bassheads and shit got weird. In more ways than one.

This was the first Organic Fest at the Blue Mountain Event Center in Wilseyville, California, population: 425. Getting there entails 35 minutes of driving up and down the windiest road you’ve ever seen. But it’s worth it. Near the top of the mountain was the event center where bass-lovers took over for the weekend. It was a small clearing (probably a little more than an acre) that was surrounded by towering trees; this clearing provided the camping areas, a line of vendors and a dusty dancefloor. If you entered the woods s

urrounding the event center you would find a little creek and glow-stick trail leading to the side stage in the woods.

To put it in perspective, the Organic main stage was smaller than most and the side stage fit about 50-70 people, both stages had beautiful sound systems and plenty of visuals. The stage sizes created such an intimate, close space, which was an amazing characteristic considering the musical legends that played between both of the stages. The promoters of the festival were only expecting 500 to 700 attendees but their resources were stretched extremely thin when around 1100 people showed up.

There was only one food truck that was open half the day, one line of about seven port-a-potties & three rustic outhouses, and a well with a spout that this journalist personally never found. This was not your grandmother’s festival. The promoters had to move their green room security to the floor when the capacity peaked but attendees were given the maximum amount of freedom possible. It was no-holds-barred. Sanity, optional. Clothing, optional. Sobriety, optional… Honestly, it was really rugged and the responsibility was put on ourselves, which felt entitling. The Organic family provided food for themselves and sharing was common, others went into town for more supplies.  The Organic family didn’t need security guards sniffing down their necks like at Moonrise because we looked out for each other. The positive vibrations protected this group of music lovers and it turned into a beautiful event laced with incredible bass.

The Organic AF family settled into the Blue Mountain Event center during that Friday afternoon and things got started around 7 PM, which was nice because it was unbearably ho

t during the day but once the sun shrank the moon brought a cool chill to grateful dancers. Rare 92 was the first performer on the main stage and people started gathering after the White Tiger broke the ice with delicious interpretive dance. Heavy bass and dubstep were the main course of this festival but there were many acts that brought different appetizers to the table. Wizkerz gave the Organic Fam a taste of his Denver dub before Woollymammoth tested out his new Nova Jaunt mixtape/album which is a bass cornucopia. PhaseOne took over with an energetic dubstep set afterwards, which began with his Firepower approved track UFO. After his set, the Australian artist commented that the vibe of the fest reminded him of “bush doof” underground parties that people throw in the Australian wilderness.

Unfortunately Dr. Ozi couldn’t make it to Organic due to visa complications but the party continued with sets from Apashe and Buku. Yheti followed up after Buku by taking the Organic crowd to trifinity and back, while Sayer exposed our Human error afterwards. Both sets introduced the ear to new sounds.This is when I tapped out but I missed a lot because the music continued until 8 am on the first two nights of the festival. During my slumber I missed sets from Secret Recipe, Trevor Kelly and more. I wasn’t going to make the same mistake the next night.

Saturday was by-far the most musically packed day and it began with an inventive live set from Lafa Taylor, whose vocals frequent Bassnectar tracks. The rapper’s energy was vibrant and reminded me of his appearance at Bassnectar NYE last January. Great Dane took over after Taylor and played some much needed chill trap from his first album along with some newer stuff. Up next was ZION I and this was one of the most hype sets of the weekend which involved classic tracks, free-styling and an amazing live rendition of the Human Bassnectar remix.

The next names on the schedule had been eyeing me the whole weekend and it was finally time. Ill.Gates transported the crowd to another dimension with the immersive sounds of his new album. We were his guinea pigs and it was ever so enjoyable. It was hard to believe that ill.Gates wasn’t the headliner but his set was the perfect preparation for the Liquid Stranger. The Swedish phenomenon was the most anticipated event of the weekend and the Organic family morphed into one moving organism as his sounds approached us. The set was really beyond comprehension and any further description would be futile. After we returned to our individual bodies there was more bass to get down to, with downright filthy sets from Stooki Sound and Joker. UK bass was properly represented at Organic Fest. Snafu, Brothel and Partywave finished off that Sunday morning on the main stage.

The Organic family grew tired on Sunday but quitting was not an option for most. The music started early that day with sets from Mihkal (who played three awesome sets throughout the weekend), D Menis, and Blaow. The main course for the evening was an insane b2b set featuring the talents of Pleasure, Shlump, Partywave, and Trevor Kelly. Then it was over.

Highlights of the weekend included a bear statue which eventually became the mascot of Organic Fest, The Cerebellum Projekt (CHECK THEM OUT), meteor showers, chill days by the creek and reading the beautiful mantras posted throughout the grounds by the Street Feather Project. Some downers about the fest included some spurts of theft, which was sad to see. But overall the festival was a success.

The promoters plan to spend way more on staff, security next year so it should be much more organized event. While the vibrations will no doubt be the same next year, the wild-renegade aspect of Organic 2016 will forever be its own.