Home Features Chicago to Ultra 2015: How Resistance and Underground Music Stole the Show 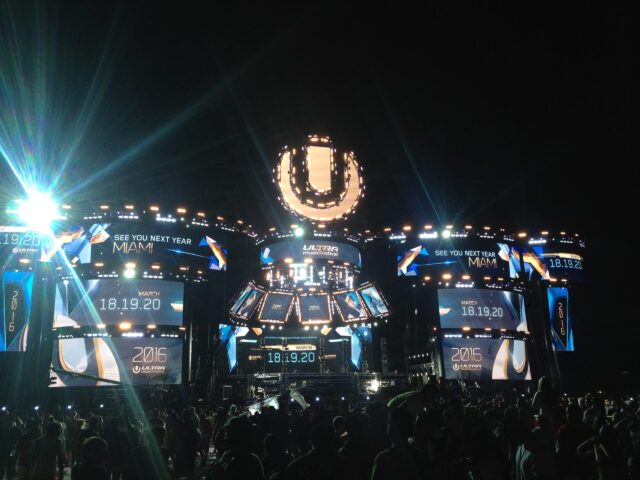 I love music and everything about it. I’ve been attending festivals around Chicago for a while now, going to Spring Awakening and Lollapalooza every year, among others. I made the trip to Electric Forest last summer, where I discovered new music, new people, and brand new experience. I was ready to go even bigger and better this year, and a friend and I chose the Ultra Music Festival in Miami, Florida. I was unable to go on a senior year spring break trip due to an internship that ended March 20th, so the timing of UMF was perfect.

We got there on Wednesday. I didn’t even know Miami Music Week was a thing until planning this trip. However, Ultra is such a huge event that nearly every DJ you would ever want to see is playing in Miami at some point, whether it’s at a pool party, 3 AM at a nightclub, or 5 AM in a warehouse. I attended Spinnin’ Sessions at Nikki Beach, HARD Miami at Grand Central, and Big Beat Pool Party at Delano Beach Club.

I could’ve left Friday morning and been satisfied with the trip. However, that Friday afternoon at 4 PM, Ultra Music Festival began. After some Bakermat, Grandtheft, and 3LAU, I stepped into Mega Structure for the first time to see Hot Since 82. That’s when this weekend changed for me.

Carl Cox & Friends’ Mega Structure stage was covered, and it was dark. The rounded ceiling, which reminded me of Perry’s at Lollapalooza 2011, was covered with moving video boards. Even though it was only the second hour of the festival, everybody was dancing. And smiling. And vibing out. I loved it right away.

It started raining, so only three stages remained open for the majority of Friday. Yellow Claw, 12th Planet, GTA and Excision were okay at the Ultra Korea stage but failed to meet my high expectations of an Ultra set. Mega Structure was about a 30-second walk away, and I found myself at Marco Carola. Carola was my favorite DJ I discovered this weekend. Check out this mix to get a better idea of his sound.

Stage 7 was a standalone stage that probably hit a capacity of around 100 people. That night, I was able to watch MOTi and Alvaro from just a couple of feet away. I met Wiwek in the crowd, who took the time to talk and take pictures with all of his fans during Alvaro’s set. From there, I made my way to Resistance, Ultra’s brand new underground stage, for Maceo Plex. I was completely blown away by the circular stage setup, pyrotechnics, and chill, dancing people. It was the last stage I saw that day, but easily one of the most impressive.

Saturday, I started with MAKJ, a DJ I had been wanting to see for years. I only lasted about 10 minutes there after getting sick of big room and electro. I loved seeing all of those typical Dutch DJs at Spinnin’ Sessions, but on day 4 of Miami, it was all starting to sound the same. The first big show I saw that day was MK, who I discovered at the Forest and has been one of my favorite artists since. His 90 minute set at Mega Structure did not disappoint; I think it’s the only set I stayed the entire way through. I realized that one of my favorite things about these electronic, non-EDM shows is being able to walk right up to the front row of the crowd. Everyone gives each other their space, and peace, love, unity, and respect are ACTUALLY felt in the air. I met up with some awesome people at this set that I would see for the rest of the weekend.

I worked my way over to Party Favor for some trap, where I made new friends from Orlando. They said they were going to Get Real that night. I then found out for the first time that was actually Claude von Stroke and Green Velvet…non-mainstage Ultra was just continuing to blow my mind. I spent most of the evening at Ultra Japan; following a stellar set by Deep Dish, Boys Noize put on my favorite show of the weekend. Dirty, danceable techno and genreless beats combined with his trippy visuals were truly something I’ve never quite seen before (be sure to catch him at Lollapalooza). The lights were so intense most of my photos and videos didn\’t even come out. There, I ran into my Orlando friends again. It’s pretty special meeting different people that have the same diverse music taste as you.

In the weeks leading up to Ultra, I couldn’t decide between Axwell^Ingrosso, Bassnectar, Cedric Gervais, and Ookay to end my Saturday. But this night, I ended up spending the bulk of my time at Carl Cox and Get Real. I still caught some Bassnectar and Ookay at the end, two of my favorites, but these were some artists I can often see at home.

Standing at the mainstream stages, I came to realize that I could just listen to these artists’ sets later and be okay with missing the live show. It’s not like they were playing much new music, anyway. I knew Ultra as an event where DJs premier brand new songs and put on their best sets of the year. This is still true, but with EDM becoming more and more commercial, popular DJs are now expected to play the songs that the mainstream fans are paying to hear. It’s less about the music, and more about meeting expectations of the hundreds of thousands of people that have caught on to the scene.

People are miserable and sweaty near the stage, and quite honestly, a lot of people in these crowds don’t look like they’re having a good time. Mega Structure and Resistance shows were complete visual and emotional experiences. The presentation was awesome, but not too overpowering or distracting from the music. The people are accepting and connected to each other. Everyone knows they’re lucky to be there, and they’re celebrating that. It’s not about the drop or fireworks and jumping up and down. It’s about appreciating music and being yourself.

Sunday was a great way to end the weekend; OWSLA had their own stage, where I was able to catch Jack Beats, AC Slater, Wiwek, and more. Mega Structure was taken over by The State of Trance. That night, after spending some time at Porter Robinson, I made my way to Resistance for the Art Department, the second to last show of the weekend. On the way I was able to catch David Guetta for one song. It was CoCo by O.T. Genasis. Not even a remix, just the original. I heard MAKJ brought him out to rap during his set too. Seriously, what is going on with EDM?

During Art Department, I met some people from Ft. Lauderdale. We were talking how if it was last summer, we would be at main stage all the time, but now we couldn’t leave Resistance. We also both agreed there was no way we were missing Skrillex that night.

I stayed at Skrillex for no longer than 20 minutes. It was an average set made up of the same transitions and songs he\’s been playing at every show. I had left long before he brought out Diddy and Justin Bieber, a move that makes me embarrassed to be his fan. It’s unfortunate because Skrillex is the main reason I’m into any of this music. Even last summer, Sonny would never do that. His closing set at Lollapalooza 2014 was one of my favorite shows ever, and I loved him in October at Navy Pier. Disappointing.

I finished Ultra with Jamie Jones at Resistance instead. I had fun right away, dancing with everyone and vibing off the incredible weekend we just had. Towards the end of his set, I ran into my friends from MK, some of which I’m planning to meet up with this summer at Electric Forest and maybe Movement. Then, in the same spot, I found the Skrillex fans from Ft. Lauderdale. They went to main stage for about five minutes and couldn’t resist coming back. We were all hanging out at the end and weren’t even mad the weekend was over. I’ve never been more satisfied with a festival in my life.

Whether you’re attending Spring Awakening, Electric Forest, Summer Camp, or whatever else this summer, be sure to explore the smaller stages. Most of what makes this experience so special is the crowd and live experience, so even if you think this music is boring when you look it up on Soundcloud, still check some new stuff out. Especially at bigger festivals with deeper lineups. If none of your friends want to wander around with you, explore on your own. Its better that way sometimes, and not a single person will judge you. You might make some new friends or discover something you didn’t even know existed and fall in love.  Anything is possible. Get the most out of your festival experience.

Until now, I’ve never been critical about the commercialization of EDM. If anything, I hoped it would bring more people to a beautiful scene and make it more profitable. But now, after listening to those mainstream sets on my 19-hour drive back to Chicago, I wasn’t even impressed. They weren’t creative; they were predictable (I finally found one I really liked earlier today – DJ Snake). For the first time, I hate the direction that EDM is going.

I highly recommend Ultra and hope all of you have an incredible festival season. Whether you prefer a house, techno, dubstep, trance, big room, trap, the main stage, the local stage, or whatever else, keep supporting the music you love.

You can check out more of my pictures (and snapchats) from Miami here. Just ignore the scratch on my iPhone camera.