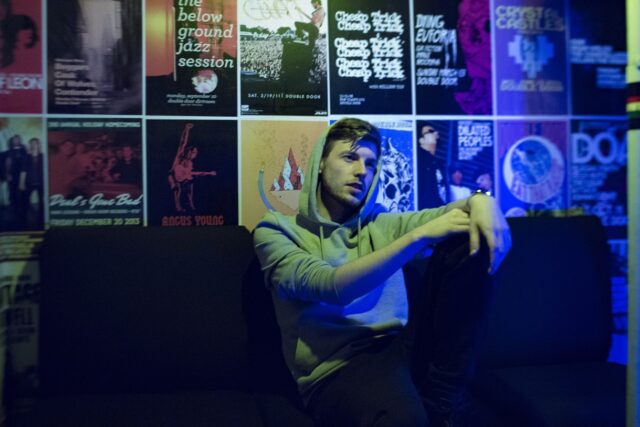 Peder Losnegård embarked on a musical journey when he developed a deep connection with the soulful melodies of his father\’s gospel-choir group, evidently this journey continues to this day. Losnegård grew up in the mountains of Norway, isolated, which forced him to find his own signature in music, his own style. This style was heavily influenced by his family and the internet but Losnegård believes that growing up in isolation allowed him an unprecedented amount of musical freedom, which is still apparent through his music today.

The thing that is different about me is that I grew up very isolated, like I literally grew up in the mountains in Norway, in the middle of nowhere. So I didn’t have much musical influences other than my family and what I found on the internet. My dad was a gospel-choir director so I listened to a lot of Gospel music growing up, a lot of soul music and stuff like that. It’s a pretty easy transition from gospel to soul to R& B to hip hop sort of, so that was a very natural thing that happened when I was 11 or 12. I would say because I grew up in the middle of nowhere and I didn’t really have anybody to teach me anything, I didn’t have anybody to tell me what was right or wrong in music. I didn’t understand much about of genres. I was just like Gospel music is lit, that shit is fire, that was my turn up music when I was kid so it was natural for me to include that in electronic music and that’s one of the things people weren’t really doing when I came into electronic music in the first place. So I think that isolation forced me to find my own way of doing a lot of things, I had no one to teach me to play piano, so I play piano in a really weird way and I had no one to teach me how to produce, so my production style is different than most people. That’s the thing that Norway has influenced me on the most, by kind of not influencing me.

Losnegård began his musical career as a pop singer in Norway, not having any idea about a growing scene known as electronic music. Losnegård had already been producing music electronically, he just didn\’t know that there was a community that had a passion for this type of music. Luckily, his friend DJ Slow opened his eyes to the the electronic scene which would later birth the projects of Lido and Trippy Turtle. Although Losnegård decided to dabble in electronica, he didn\’t want to stop being musician or lose the truly live element of shows.

I came into electronic music not knowing anything about electronic music, like my first Lido song I ever wrote is what is now known as I Love You Pt.2 and that was my intro to my live show as a pop singer. I didn’t know that there was a scene for that type of music, I didn’t know that was stand-alone music at all. A friend of mine, DJ Slow heard it and was like ‘Yo I work with this music, people go to shows for this music’ and I had no idea. Coming into electronic music and not knowing anything, it was natural of me to include a lot of live elements because I was seeing all these shows and they were calling it live. I was like this is live like guitar hero, it’s about pushing the right button at the right time to make sure it sounds as close to the original as possible… So it was really important for me when I was putting together this live set to give myself the freedom of being a musician. There’s a drum pad on stage, a couple keyboards on stage, I do a lot of vocals but am not triggering a bunch of stems in ableton because that isn’t very interesting to me rather I left a lot of space in my songs to improvise and do whatever I want. It keeps a little bit of musicianship in it and [allows] me to have fun. The live element is definitely an important part in the way I produce things and the way my live show is built.

Once Losnegård settled into electronic music, he realized that it was a platform in which he could include all the styles of music that he loved. Lido was a medium that allowed him to pursue music \”without compromise\”, a sort of psychic automatism that served as his creative outlet.  The I Love You EP emphasizes this idea.

I didn’t know it was an EP until it was an EP sort of, like some of those songs started out as remixes where I ended up taking the vocal out and making it my own song, some of them were just production experiments, some of them were interludes for previous projects. I called it the I Love You EP because that was the main track on it. This was all music that I put together without thinking too much, there was no compromise because I was doing all these other things and the Lido music was my creative outlet. Lido was my playground. I think the metaphor in the title was that it was me combing all the elements of different genres that I love without compromise. I love the harmonies from R&B music, I like the energy of rock music, I love the vibe of hip-hop music, I love the punch of electronic music, and I love the rhythm form fusion jazz, so it was sort of like including all the stuff that I love.

Besides pushing the boundaries of production through his Lido project, he has also been influencing the hip hop arena by producing songs for Chance the Rapper. They started working together when Lido was producing a track for Towkio, \’Heaven Only Knows\’, and Chance jumped on. They both shared a passion for Gospel music and later collaborated on a \’Planes Remix\’ and Chance\’s newest song, \’Angels\’. These are the first of many collaborations to come, according to Losnegård.

Literally since his first tape came out, I\’ve wanted to work with him because he is the only rapper I know that fucks with Gospel music. He’s the one, there is only him. He’s the only one that fucks with Gospel music the same way I do and he’s the only one that realizes the potential of that energy and has got the balls to put it in another genre. So I was so stoked to start working with him, I started working with him through Towkio, I did a song for Towkio, ‘Heaven Only Knows’ and Chance jumped on it and we started doing a bunch of music after that. We’ve written a bunch of music together that’s not out yet and I don’t even know if he knows but he is my favorite artist. I think we complement each other so muc… he thinks of rap music in a very musical way and I think of hip/hop and production in a very musical way. I think he’s a genius.

Although Losnegård is such an eclectic artist, he would still fall under the umbrella term EDM. He considers this term outdated and is tired of people comparing him to Tiesto when he mentions that he makes electronic dance music.

Electronic Dance Music is the broadest term ever, except for Pop music. Popular music is whatever music people like and that shouldn’t be a specific style of music. I wish I was able to tell my Uber driver that I make electronic music without him saying ‘Oh like David Guetta’ or ‘Oh like Tiesto” and I’m like no, it is very different. So to describe my music to my Uber Driver I say, I make dance music that’s really difficult to dance to because it’s so weird and all over the place. It’s definitely an oversaturated market, there’s a lot of music that feels very manufactured, very plastic but that music didn’t always feel like plastic, it was weird and underground at one point. That’s just the nature of popular music but people’s minds are so much more open to weird shit now than they were a couple years ago. That’s why I got into electronic music in the first place, I was like this is the only place where I can do whatever I want, the only place that’s open to me sampling stuff and doing weird things.

Lido came to the Double Door  as the final stop of his Fall 2015 tour and gave a lucky Chicago crowd the show of a lifetime with guest appearances from Santell and Halsey. His music was mind-blowing and seemed to shed light on a world that was brimming with beauty, but it was hard to dance to. Check out some photos of the show below.