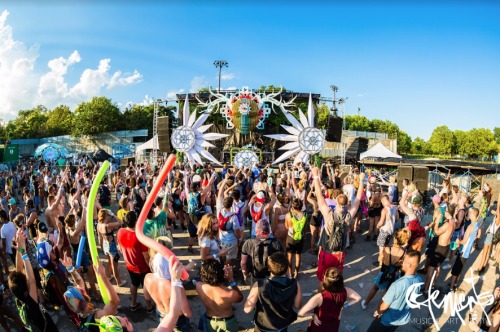 Elements NYC was a festival unlike your traditional weekend-long event. With only one day on the lineup, it was hard to fathom how they could fit so many acts in such a short time frame, and allow fans to catch all of their favorite artists. Not to mention the job being made even harder with a coastal downpour running through the festival grounds.

To begin, the Elements staff did an amazing job reacting to the situation, making a very smart decision in advance by moving the secondary stage into their huge warehouse, which kept out the water, and perfectly reverberated the sound of artists like Jade Cicada. This setup allowed for the art on scene to become a part of the sets themselves, and fans of the warehouse performers could be seen hanging all over the structures enjoying the sets with a better view than they could have expected.  In addition, the main stage, which featured heavily followed artists such as Bassnectar and Emancipator, made up for their smaller LED display by pumping booming sound and a ton of lasers throughout the crowd, thoroughly pleasing every basshead and festival junkie in attendance.

Next year, we hope that Elements will add a couple of water stations, more efficient line times, and add a little more signage to direct people to things such as water, bathrooms, and different stages. With that being said, the staff did an amazing job working against the “elements” and doing what they could with what was at their disposal, leading a situation that could’ve wrecked less prepared promotions to become a huge success. We can’t wait to see how they improve and what gets added next year!

Until next time, Elements NYC.