Home Features 5 freaky festivals to consider for this Halloween 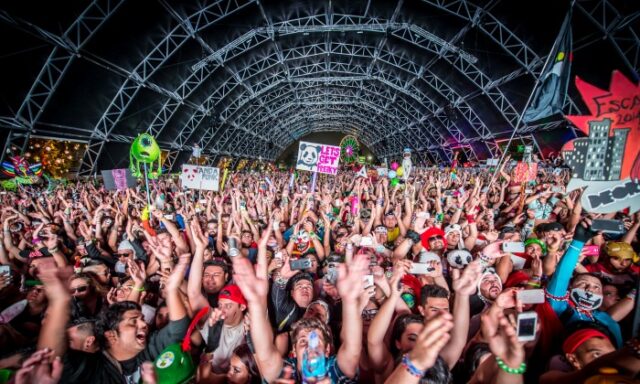 Summer may have recently came to an end, but this years\’ festival season is nowhere near over. Halloween music festivals are taking the country by storm with their jaw dropping line ups and hair raising themes. There is no better way to spend Halloween than getting to dress up with your festie family and raging to the nations top djs.

Hard Day of the Dead is one of the biggest music festivals held in Pamona California, known for its incredible line ups and enormous venue The Fairplex, this Halloween fest never fails to draw in tens of thousands of people. This two day music festival will be held on Saturday, Oct. 31- Sunday, Nov. 1 and is a +21 event. Day of the Dead lineups always feature a wide array of genres including dubstep, deep house, and hip-hop artists. While Skrillex, Nero, A$AP Ferg and Future headline the fest, Hardfest is pleased to welcome back Deadmau5, Kill The Noise and Arman Van Heldan. Tommy Trash, Juicy J and Alison Wonderland are among the other acts to be performing this Halloween weekend.

This music and camping festival is held in Live Oak, Florida next to the enchanting Suwanne River. The breathtaking venue is filled with palm trees, wild life and intense laser light shows all through out the deep forest like land. The three night festival will be held Friday, Oct. 30- Sunday,  Nov. 1 and will be headlined by none other than The String Cheese Incident on all three nights. Suwanne is a music lovers dream with acts including Pretty Lights, Chance the Rapper, Odesza and The Floozies. To follow the tradition of an annual costume themed festival this year festie- goers are expected to follow the \”Ghoul Train\” theme and dress in late 70\’s/ early 80\’s attire.

The Voodoo Experience or commonly known as Voodoo Fest is a multi-day music and arts festival hosted in New Orleans, Louisiana\’s City Park on Friday, Oct. 30 – Sunday, Nov. 1 . The fest is known for hosting over 2000 artist and being nominated for Music Festival of the Year twice in 16 years. Last year Foo Fighters, Skrillex, and Outkast headlined the Voodoo Experience but this years line up reaches a new level of legendary with show stoppers like Ozzy Osborne ft. Geezer, Butler, Tom Morello and Slash, The Zac Brown Band, Jack U and Deadmau5. This all ages festival brings all types of people to the city park for music, art installations, authentic Louisiana cuisine and a freaky good time.

Every year Insomniac Events holds one of the biggest Halloween festivals in California, known for its usual massive lineups and beautiful festival grounds Escape is a place where bass heads and art lovers unite to take on the freakiest holiday of the year. This year the festivals theme will be Psycho Circus, so make sure to prepare yourself to bump into contortionists, fortune- tellers and other freaky performers who will be walking around the festival. Don\’t forget to check out the haunted mirror maze and the 3D glow in the dark art installations. The Psycho Circus will be held Saturday, Oct. 30- Sunday, Oct. 31. Acts include Benny Benassi, Excision, Black Tiger Sex Machine and Martin Garrix. Daily headliners have yet to be announced.

For all you freaks out there Freaky Deaky is the perfect festival for you. React Presents decided to change it up this Halloween by making their annual Freaky Deaky festival bigger and better. The usual three night event has turned into a three day music festival held at Toyota Park on Friday, Oct. 30- Sunday, Nov. 1. With a lineup with over 50 show stopping  artists Freaky Deaky is sure to be the biggest Halloween fest of the year. The weekend will kick off with Bassnectar headlining Friday night and the scariest night of the year will be closed out by none other than Armin Van Buren. Pretty Lights finish out the weekend by headlining Sunday night. Freaky Deaky will be sure to bring headbangers and hip hop lovers from around the world to get freaky in the Midwest.  Other acts of the weekend include Dasik, Paper Diamond, Mac Miller and Tchami.