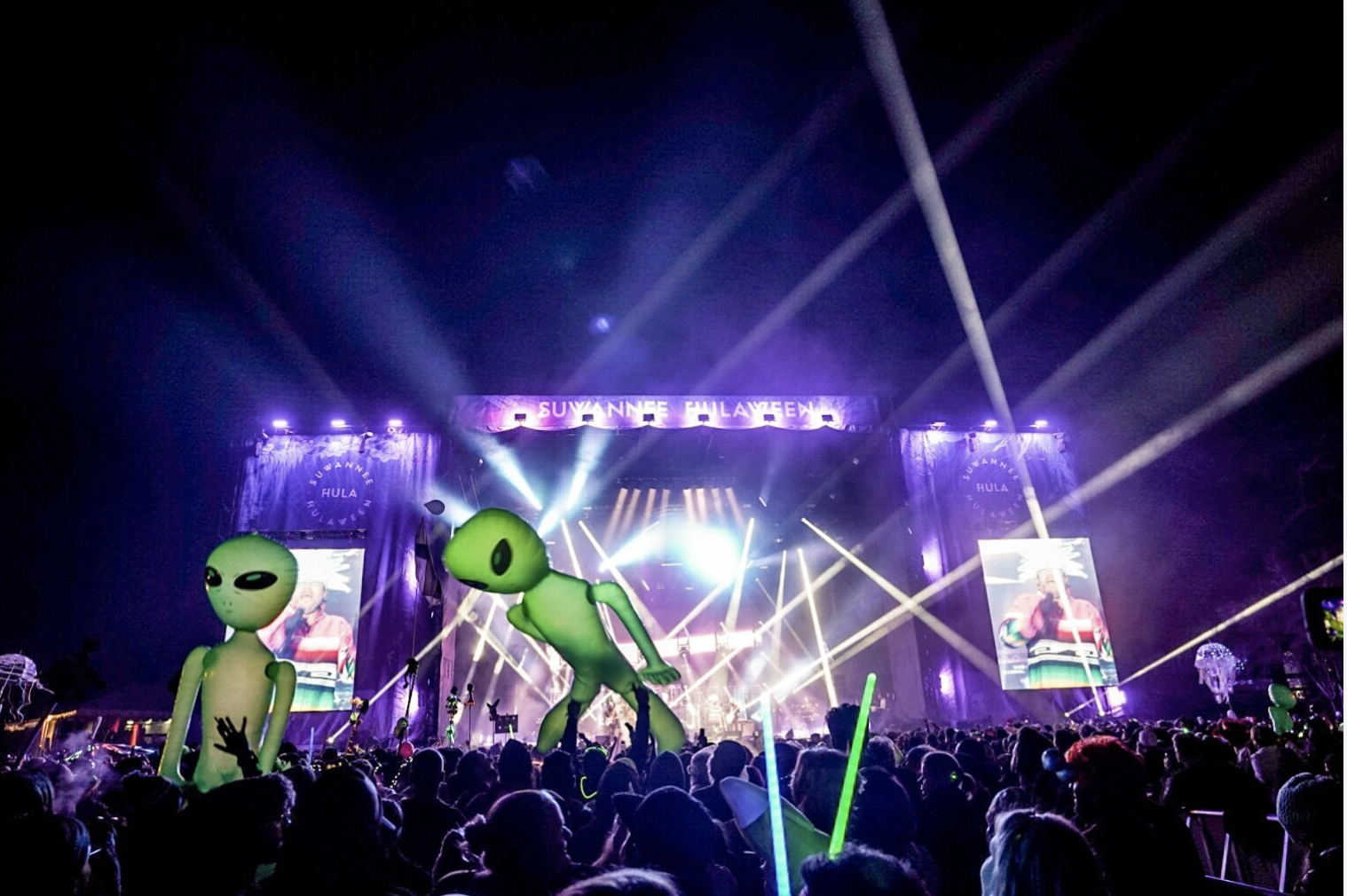 Halloween weekend is highlighted on my calendar and is always a big weekend for music. Across the country, many different kind of Halloween festivals take place where attendees dress up in their favorite costumes while seeing their favorite artists. This year EDM Chicago took the 15 hour road trip down to The Spirit of Suwannee Music Park for the 2018 edition of Suwannee Hulaween. Check our breakdown of the music schedule, campgrounds and activities from this magical weekend below:

Suwannee Hulaween featured three days of music plus an optional pre party on Thursday. With such a stacked lineup there were worries of some painful conflicts, but Silver Wrapper crafted a truly outstanding schedule. Hulaween featured 5 stages. The Meadow is the festivals main stage with The Patch, The Amphitheater, Spirit Lake and Campground all packed with wonderful acts all weekend. Thursday featured an afternoon set my Psymbionic followed by alternating sets by STS9 and Joe Russo’s Almost Dead, each playing two sets respectively. The night ended with headlining sets by EOTO & Friends and an extra funky Lettuce party.

Saturday was a monsterous day and one of the strongest single day lineups of the year. Lettuce played their second set of the weekend early in the day at The Meadow, their first time on the mainstage at Hulaween followed by a bass heavy set by Bleep Bloop at The Patch. The String Cheese Incident played three shows featuring their other worldly “Women of the Galaxy” themed set. Getting bored in between SCI sets? Don’t worry, Troyboi and Manic Focus both rocked The Amphitheater during set breaks. Immediately following SCI’s themed set was Tipper absolutely packing The Amphitheater featuring a disco ball party with Jonathan Singer on the visuals. Lastly, the space cowboy himself, Jamiroquai rocked The Meadow with a two hour funk party.

Last but certainly not least, Sunday started with Yonder Mountain String Band followed by the last two SCI sets. Sunsquabi made their return to Hulaween (dressed as pandas) with an impressive daytime set that had the whole crowd grooving. Following SCI was OPIUO at  Spirit Lake drawing an thrilling, high energy crowd. Later on, The Revivalists closed out the Amphitheater with a massive show. Finally, to close out the weekend, NGHTMRE and Gramatik had The Patch going crazy while Janelle Monae closed out The Meadow.

Suwannee Hulaween features top notch camping. The Spirit of Suwannee Music Park is a year round campground so naturally the camping was beautiful. Upon arrival, attendees enter the park and search for the perfect campsite. Unlike similar festivals like Okeechobee and Electric Forest, general admission campsites are not assigned or confined. A large majority of the campgrounds are in wooded areas allowing campers to have hammocks at their campsites, hang tapestries from trees and really allowed you to set up a comfortable, welcoming campsite. The venue has multiple free showers and bathrooms that are not far from wherever you’re camped. There were also plenty of food and merchandise vendors in the campgrounds so you could grab a bite to eat on your way to see the music or pick out a new shirt for the day. Late in the night the campgrounds came alive. No matter what mood you’re in there was something for you from renegade DJ sets to chilling out next to a campfire.

Hulaween’s Spirit Lake featured numerous, breathtaking art installations and other activities. The Spirit Lake stage and Campground stage are both located in Spirit Lake along with a casino, silent disco, mural maze and hologram projections over the lake itself. This was a great place to explore in between artists or late night when the music ends. Every time you thought you’ve seen everything at Spirit Lake, another new installation caught your eye and drew you in. Also located in Spirit Lake was The Oasis which featured workshops all weekend long such as yoga, mediation and other discussions.

Thank you to Silver Wrapper and Suwannee Hulaween for hosting EDM Chicago and putting together a truly beautiful weekend!