Home Events Review: A Night With Pretty Lights In Chicago 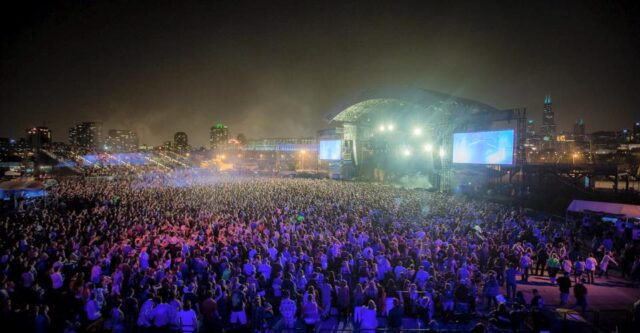 First Merit Bank Pavilion was invaded by the PL Fam this past weekend for the Chicago stop of Pretty Lights Live, An Episodic Festival. The two-night festival was jam-packed with incredible musicians such as G Jones, Tipper, and of course, Derek Vincent Smith himself. This review will focus on the first night of Pretty Lights Live, which featured performances from Manic Focus, Emancipator, Sunsquabi, and Statik on Friday. The first night\’s line-up was all about the vibes; jam vibes, funky vibes, good vibes, while the second night was all about that bass vis-à-vis back to back sets from Tipper and G Jones. Even though I usually opt for bass I was excited to immerse myself in a less-intense vibe.

The night started out with a mystical and thought-provoking set from the Chicago native, Statik. This young artist\’s ambition had led him to open for artists such as Manic Focus and Freddy Todd as they came through Chicago, but now he was opening for Pretty Lights.  Talk about a storybook come-up, anyways, his set was great and he finished it off with a live rendition of \’Outbound\’, the title track from his new album. Statik thanked his hometown crowd as he departed from the stage to make way for Sunsquabi.

This was my first time experiencing the Boulder based electro-jam group and it was a groovy fun time. The Sunsquabi crew knew exactly what the crowd needed to get moving and before long many booties were shaking. As their final guitar licks echoed throughout the pavilion, the sun hung in between the buildings making up the Chicago skyline and time seemed to stand still for a bit. As I pondered, I realized that I could use some funky-heavy bass, luckily Manic Focus was up next. To my surprise, he brought out his live band including Russ Liquid on horns and about four other musicians to harmonize with. It was time to get down. Manic Focus was on fire; he was playing classics such as his Dani California and Tracy Chapman remixes while also letting the band jam out into oblivion. The highlight of Jmac\’s performance was when he brought out special guests Psalm One and Emily Nicols to perform a new song. It was then time to chill, Emancipator was up next.

At this point the crowd was getting thicker and thicker, which led to the realization that that may not have been the optimal environment to experience Emancipator. Eventually I retreated to the concession stands, grabbed a bag of peanuts and placed myself comfortably on the elevated seats in the back of the venue. It was devilishly windy and quite cold, but my scarf and the warmth of skyline at night kept me stable, then the Emancipator duo began soothing me with their incredible music. In my humble opinion, being able to recline and enjoy Emancipator with a bag of peanuts was one of the most peaceful experiences I\’ve had. But as Emancipator finished a beautiful set, tensions rose… it was time for Pretty Lights.

It took a while for the stage crew to set up all of the flashy toys for the Pretty Lights Live set and a sea of humanity waited while listening to Bob Marley. I remained planted in my seat until I heard that booming bass approach my area, then I saw the Pretty Lights logo flash across the screen. I rushed down the steps back to the general get-down area and before long I realized I lost all chances of getting super-close. I didn\’t mind. I found a pocket of space within the multitude and I began to move. The bass was legitimately throbbing throughout my body, almost encouraging me to keep on dancing. There were plenty of pretty lights too (; but seriously DVS pulled out all the stops with hologram-esque lazers, which reminded me of Star Wars. Spending the night with Pretty Lights was definitely a night to remember.