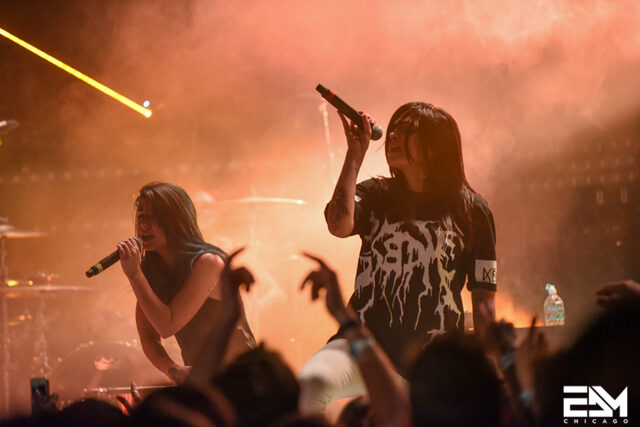 I\’ve been following Krewella for a while. After hearing the Play Hard EP in 2012, I became a huge fan of this energetic group that came from the Chicago suburbs. Their debut album, Get Wet, was decent, and after a few songs were played on the radio, they basically became completely mainstream and hated by EDM fans.

The last few years have been no better for them. Last September, the group\’s DJ, Rain Man, left the group on awful terms. The general consensus was that the girls forced him out of the group because of his sobriety and they felt he didn\’t fit in with the group\’s image anymore, possibly with help from obnoxious tweets from Deadmau5. The girls still deny any wrongdoing.

On May 14th, 2015, Krewella played a show at Park West, a small concert location in Chicago that doesn\’t usually have EDM shows. It was an awesome venue. The event was run by Pandora, and was free for the first 900 people that RSVPed. It was the first time I\’ve seen them since Spring Awakening 2013.

Doors opened at 8, and until Krewella finally started at 9:45, there was basically nothing going on. I still haven\’t been able to find out the name of the DJ that opened for them. Based on the quality of his selection and transitions, I think it was some guy they found off the street for a couple hundred dollars.

The beginning of Krewella\’s show was actually pretty cool. They started by playing some of their hit songs; the girls had a DJ setup in the back, and each one would switch off between DJing back there and singing at the front of the stage. There was also a full drum and guitar setup. I really enjoyed the first few minutes of the show. It was Krewella songs that everyone wanted to hear and the crowd was loving it.

After about 15 minutes I was ready to leave. If they just played their songs we all know and love and put a live spin on it, I would have seriously enjoyed this show. However, instead, they chose to play a bit of everything, which resulted in them having no identity. The pattern of the set was usually a popular Krewella song, out of place hardstyle or big room track, random EDM song that everyone knows, and repeat. The set had no flow and let\’s just say their DJ work wasn\’t the best. The only people dancing were the first two rows and one section of people in the back. It seemed like the other people there were just promoters for Pandora or people staying for the open bar (me).

The acoustics at this show could not have been worse. I started the show watching from the VIP balcony and could only hear the drum set. I figured maybe it was just because I was standing so close to the stage, but their music sounded no better in the back middle of the crowd. I would hear a drop from a song that I liked, but the drums and guitar were just so overpowering that it ruined it completely.

Around 10:30, the place was probably about 75% full. The girls took a break from singing for a minute and their guitarist took out his acoustic guitar and went to the front of the stage. Jahan asked \”is the Bulls game still going on??\” The game was over for at least an hour, and we got killed by 20. Our season\’s over. You\’d think they would know that since they were such huge fans right?

I went to the bathroom at this time along with most other guys there. This was the most fun I had all night. Some of the quotes I heard in the bathroom:

\”Thanks for doing an acoustic set Krewella! I really had to pee!\”

\”I mean I guess this shitty music is paying for our free drinks right?\”

\”The acoustics suck here. All I\’ve heard this entire time are the drums.\”

Clearly, I wasn\’t the only one disappointed in this show. I went in the crowd after this, and saw the first mosh pit around 10:50. There were four people in it and it lasted about 15 seconds. They continued to play their hits but completely butchered every one with the attempted live presentation. Jahan took a Chicago Krew flag from someone in the front row and held it up for a while; it was upside down and she never even noticed. I laughed out loud. At the end of the show, someone from the crowd hopped up and did a stage dive. He fell to the ground almost instantly.

I met up with some photographers and writers from other blogs at the beginning of this show, and none of them made it to the end. I thought maybe their last song would be worth staying for. I didn\’t even recognize it, and by the look of the 300 to 400 people left in the crowd, they didn\’t either.

Check out the show pictures below:

Companies Need to Protect Themselves From Social Engineering – and They...