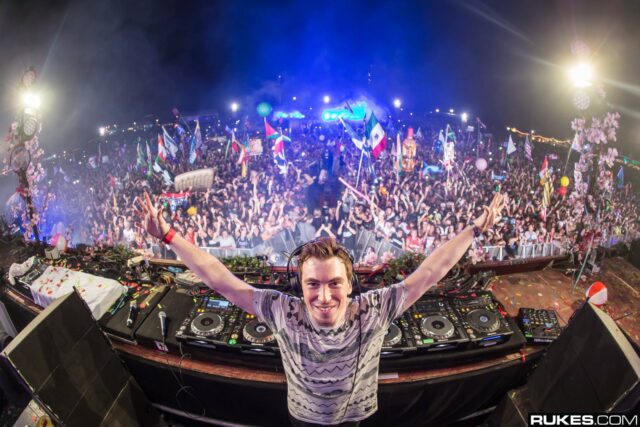 Unless you live under a rock in some remote part of Australia only accessible by kangaroo saddle, every feed in your internet existence is flooding with your favorite DJs begging for you to vote for them (or not to) in the DJ mag Top 100 DJs list. It\’s EDMs yearly love-it-or-hate-it Oscar season, and I\’m here to tell you why the only thing for a reasonable person to do is  just not give a flying fuck about it.
I think that everyone will agree that it\’s just a popularity contest. Whoever has the flashiest shows, most social media exposure, and largest fan base is going to win. As a result, this is the time of year where we see DJs trying to get attention on social media in any way that they can. If you\’re Martin Garrix, Axwell, Ingrosso, or Hardwell, you\’re getting on stage at massive party venues playing huge shows together that are bound blow up Instagram feeds all over the world. If you\’re David Guetta, you\’re appropriating Native American culture in your videos in an attempt to stir up controversy online. If you\’re a member of Dash Berlin, you \”disappear\” in the Mexican jungle at the beginning of my shift at work and are \”miraculously found\” by the time I check Twitter again on my lunch break (and if you\’re anything like me, you shared Jauz\’ reaction to the news). Or if you\’re DVBBS, you jump really, really high. Yawn.

But what bothers me the most about the contest, and the EDM community to a certain extent, is the lack of definition as to what we are actually judging and what it means to be a great DJ. Is it live mixing, creating loops, and scratching? Is it whoever played the most Maarten Vorwerk tracks in their sets? Is it who had the most creative visual presentation? Is it whoever produced the best original music over the course of the year? Who had the best live elements in their sets? Who had the most people \”rolling their fucking faces off\” during their set at EDC? Or is it whoever can jump really, really, REALLY high?

These are all issues that I think DJ Mag should address if they ever want their survey to have any kind of credibility. Hell, Daft Punk got a spot on the list last year, and while I personally love their music, they didn\’t technically even play any traditional DJ sets!
The list in it\’s current state is an absolute disgrace to electronic music. Many of the artists on the list have even been caught or admitted to using ghost producers! Doesn\’t that bother anyone else?? I understand that many of todays top pop and hip hop artists don\’t write their own songs either, but they at least have to have the skills and charisma to successfully record them and perform them on stage. With EDM, 100% of the craft and artistry is in the writing and production. Even with performing them, all they have to do at festivals (more or less) is press play and shout and dance around while half of their body is hidden by the set. Hardly performing if you ask me. Even if they aren\’t actively \”mixing\” when the drop hits, a lot of the enjoyment for me comes from the supposed fact that the artist who is currently performing the song spent hours upon hours perfecting the track in the studio and is now enjoying the fruits of their labor. What\’s the point if they just paid some dude to make the tracks for them?
Plus, why do we even try to quantify music into something as subjective as a Top 100 list? Enjoyment of music is one of the most personal human experiences that exists. Some of us like to jump and scream along with the crowd to our favorite songs, some of us like to bob our heads along to the beat in the back, and some of us prefer to kick back at home and discover new music with a nice IPA and a good pair of headphones. There is no right or wrong style of music to enjoy, and as such there is no right or wrong way to enjoy music.  The list only perpetuates the horrible idea that some types of music are \”better\” than others just because it has more mainstream appeal. That being said, here is a novel idea for you: Listen to the music you love. Use tools like Pandora to find more of the type of music you love. Share the music you love with others. If they love it too, great. If not, ask them what they love, and maybe you\’ll just love it too. If you don\’t, that\’s okay too. Rinse and repeat.
So the next time you\’re walking home from the bus stop and a skinny white man with his hand scratching the back of his head walks out from an alley and  whispers to you \”Psst! Hey kid, you wanna vote for me in the Top 100 DJs?\” Just say no.

Not even once.
Image credit: Rukes.com