Home Features More Than Just A DJ: Justin Jay @ The Roxy in Hollywood,... 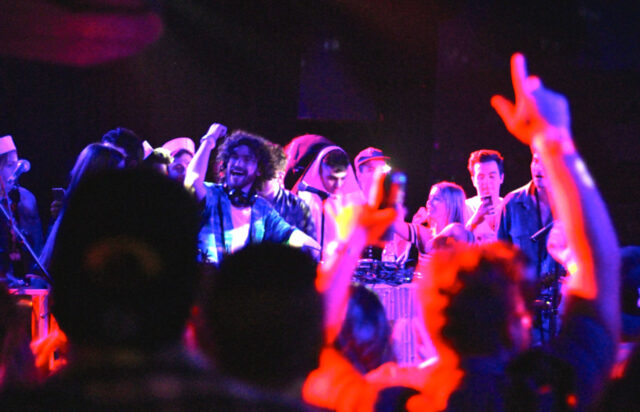 One of the reasons so many “musically minded” people have a problem with EDM is because of it’s live application. Let’s face it, when you look up at a DJ, whether they’re on a 200 foot tall stage or in the corner of a crowded basement, there isn’t really a way to tell what they’re doing. In fact, if the DJ is doing his/her job right, then there shouldn’t really be any indicators of their actions as the songs should just fade together seamlessly. The problem is, this creates a sense of ambiguity as to what is actually happening. Is the DJ mixing live? Is it a pre-recorded set? Unless you’re the DJ yourself, it’s almost impossible to know.

Now compare that to watching a band perform. When a band is on stage, you can see the drummer hit the cymbal, and here the crash it causes. There isn’t any doubt involved. Well after Justin Jay’s LA homecoming stop on his Fantastic Voyage tour last Saturday at the Roxy, there is no doubt that a set of CDJs can be just as much of an instrument as a guitar.

When Justin announced his tour, he gave his fans and followers two very important pieces of information as far as what to expect. After all, he wasn’t hitting the standard DJ-set clubs (at least in LA). Those two pieces of info included a tweet/post wherein Justin said:

The second came in the form of a video of Justin and his “friends” performing his new track, “Karma” live. And when I say live, I don’t mean with a beatpad instead of CDJs, I mean full band live.

With these two pieces of info in mind, I had both a clear idea of what Justin intended to when I entered the Roxy, and no idea whatsoever. Would he integrate a DJ set into his live stuff? Would there be two sections, DJ and live? Would it be a full set of just live band action? Well after Sacha Robotti properly delivered a set of Dirtybird bangers to open, I found out the answer was D, “all of the above.”

The show started out as I expected, with a DJ set, but this wasn’t just another Justin Jay Dirtybird set. He said he would get janky, and that’s what he did. Other than his grade-A hits “Rain Dance” and “Hit It” Justin mostly avoided electronic music. His DJ set was a series of soul and funk classics with some new-school flavor peppered on top, and despite the new-school flavor being found within in recorded music, he also was sure to bring it when he went live as well.

One important thing to note is that from the moment Justin walked on stage, there was at least ten people up there with him partying their faces off. Most of them donning sailors hats in keeping with the “voyage” theme, and one of them was even wearing an Orca whale onesie, but most importantly, seven of the ten were simply his band waiting in the wings.

Several times throughout his DJ set, Justin would isolate certain parts of different tracks to make room for his instrumental cohorts. Utilizing the CDJs ability to alter tempo, pitch, as well as it’s numerous effects, Justin would either cue his band to come together or just simply give them a chance to jam over the song being played. He gave his drummer more than a few bongo solo breaks, and the trumpeter and saxophonist had at least five minutes where they were battling each other. The transitions from the precision of recorded music to the inherent messiness of live music weren’t always the smoothest, but I can say factually that I have never seen another DJ attempt something like that. Besides, when the transitions did work, the crowd went absolutely wild.

However, even as I was fully enjoying Justin’s live/DJ set, the real treat came in the last 45 minutes of his two-hour long set because that’s when the stage was cleared of unnecessary personnel to make room for the band.

It’s not uncommon for DJ/Producers to start out as instrumentalists. Kygo is a fantastic pianist and Skrillex was in several rock bands before he became Skrillex, but the difference between them and Justin is that they have never interpreted their electronically produced music in that way for a general audience. Sure Skrillex played guitar on “Where Are Ü Now” at the Grammys, but he’s never put something like that together for a general show. In fact the only other time I’ve heard of a DJ doing something like was when Avicii tried at Ultra and was subsequently booed off the stage. When Justin Jay and his friends performed their 45 minute set together, he was the opposite of booed off stage. Opening with the same version of “Karma” that was seen in the video, Justin Jay transformed from a DJ to a rock musician in a matter of seconds, and his band transformed from partiers to musicians even quicker. The band was so tight it’s hard to believe how short-lived this idea really was. Everything about the performance was on point from Josh Taylor’s voice, to Benny Bridges’ epic guitar solo.

After the band stuck their last chord, and the introductions were listed, the vibe in the room was unreal. I, along with all of Justin’s real fans, were utterly dumfounded by what we had just witnessed, but before any of us could actually comprehend what happened, Justin was quick to drop one of the jankiest tunes of all time, “Le Freak” by Chic. If those of you reading this aren’t initially familiar with that song, it’s the one disco tune that starts off with a resounding “Freak Out!”, and boy let me tell you, that’s exactly what we did yet again.