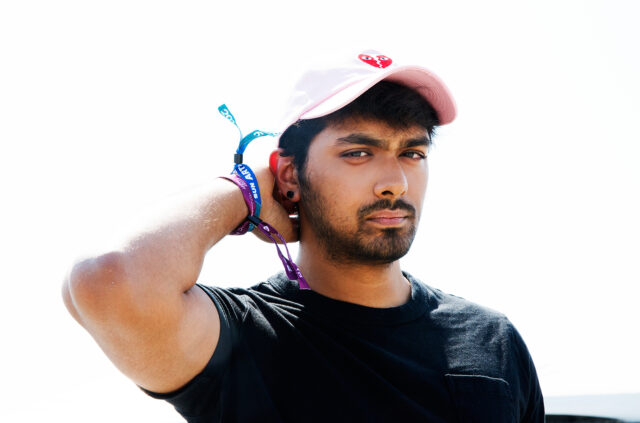 Every so often, a new talent will come across SoundCloud and almost immediately will be reposted by every account and their tracks quickly amass millions of plays. In 2014, this talent made a name for himself by remixing a Skrillex tune that ended up being signed by the man himself. In 2015, this talent blew everyone out of the water with a single called \”Indian Summer\”. Meet Jai Wolf. Real name Sajeeb Saha, Jai Wolf has catapulted into mainstream success, with his singles being used in TV shows, commercials and the like. Having produced for many years now, \”Jai Wolf\” is the latest project that Saha has created and gone full steam ahead with. We were able to catch Jai Wolf right after his set at Spring Awakening to tell us a bit about what he\’s been up to, who he\’s been listening to, and what his goals are in the future for the Jai Wolf project.

Yo [Jai]! You just wrapped up a really dope set. What was your first time at Spring Awakening like, and how was the crowd and the energy?

JW: It was so cool. I’ve played a couple shows in Chicago last year, but this is my first festival in Chicago, and it was a good time. It was great seeing people get into the songs, and I saw someone with a Bangladesh flag and I’m from Bangladesh so, that was super special. Just really good energy out there.

Sick, so you had Indian Summer, and more recently, Drive with The Chain Gang of 1974, which have gone on to be really massive hits across music streaming platforms and are remarkably unique to what we normally hear in “EDM”. What got you into making this type of electronic music, and what drives you to push the envelope further with every release?

JW: That’s a really good question. I’ve always really been into the more indie-electronica scene for a long time, and when EDM was getting really big, I got kind of distracted. If you didn’t know, my project before Jai Wolf, I was making a lot of dubstep. But at some point, I just kind of realized that I didn’t want to make dubstep for like 10 years, so it took me a while, I started a new project and Jai Wolf started in 2014, and over the course of two years, I sort of narrowed down the sound that I wanted to do, which led into the “Indian Summer” type style, more melodic, more euphoric, and less reliant on trendy sound samples. For example, with Dubstep, you hear the kick and the snare, you know it’s a Dubstep snare, so I wanted to use less of that, and more, timeless sounding synthesizers and sounds. The one thing is you know it’s a Jai Wolf song when you hear the really melodic vocal chops, or whatever, and you hear it in the Fields remix, and you hear it in Indian Summer.

So speaking of pushing boundaries, who are some of your favorite up-and-coming artists that you really want people to keep their eye on for 2016?

JW: One kid, Wheathin, I actually brought him on stage today. I played one of his songs, he’s like 16 or 17, he’s from Chicago, definitely keep an eye on him. His management, also manages Louis the Child, but he’s someone to keep an eye on. I think Flux Pavilion brought him out two days ago here too, and he played Spring Awakening, so literally made three appearances. Played Spring Awakening, appeared during Flux’s set, appeared during my set, and the kid is just on fire right now. He has a lot of cool tracks, and it’s just really cool to see him grow.

So as you’ve grown and evolved as an artist, more recently have you noticed your sound start to change over time with certain trends? Or do you try hard to keep things incredibly unique and fresh?

JW: I think when people start out, it’s very easy to get caught up in the trends, and that’s fine. It’s usually for practice, you’ll hear an artist you like and you’re inspired by, and you want to sort of replicate that sound. I think a lot of people on SoundCloud will hear people like Flume or Cashmere Cat, and they like it, and in the 2013-2014 era, people were kind of mimicking that sound. I admit that at first I was doing that too, but after that, I realized I want to make music that’s not like that, and more Indie-leading. Sometimes, you’ll have to start in the box but eventually you’ll move out.

Are there any particular places you go, or people you look up to, and grab inspiration or creativity?

JW: I like Two Door Cinema Club. I like pop-leading acts like Halsey and Troye Sivan. I think a lot of my songs have pop in their DNA too, they’re really catchy and simple but I mass them with more SoundCloud, or Indie, type sounds. Even stuff like Blink-182 or Kanye West find their way into my music, maybe it’s not so overt, like you’re not going to hear Indian Summer and think that reminds me of Kanye, but I definitely pull from a lot of different genres for my music. It’s in there, but it’s subtle. May not be apparent to the average listener, but that’s where I pull a lot of my influences from.

Do you ever see yourself gravitating towards any different sounds in the future?

JW: When I switched to Jai Wolf, I wanted to make sure that this was my main project. So, if I’m evolving, I’m evolving towards what I want to be, and that’s where “Indian Summer” was the first step in that direction. “Drive” is the second step in that direction, hopefully my future music will be reflecting that. But yeah, that’s really what I’m focused on. Who knows though, maybe in two years, I’ll try some weird shit and I have to make a new name for it, but right now, this is my main focus, I’m dedicating my time to building Jai Wolf into something more than what it is right now.

We just had “Drive”, and of course your show here at Spring Awakening, what does Jai Wolf have in store for us throughout the rest of the year?

JW: I can’t say much, but we have the new tour, which I’m very excited for. I just finished my Spring tour, we sold out every single date, it was a mini tour though. Only 14 shows, but this one is going to be twice as long. It’s in November, and tickets are on sale. Of course, new music, can’t speak that much on it but if you like “Drive”, I think you’ll like the next few tracks I’m working on.

Follow Jai Wolf on all of his social profiles, and stay up to date with his music: