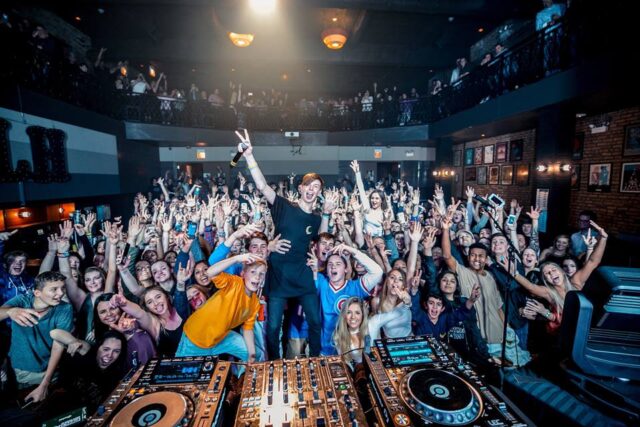 It doesn\’t get much better than playing a sold out show in your home town…especially at the ripe age of 17. This past weekend, Whethan made a stop at Chicago\’s Lincoln Hall for his Savage tour with a few special guests including opener Melvv, Oliver Tree and trumpeter Light House.

The show went without a hitch, as the producer flipped from one infectious track to the next. From Daft Punk to Skrillex, Flume to Ookay, and RL Grime, Whethan made sure to play some of the most beloved crowd pleasers but he also killed it with his own beats like \”Savage\” (feat. Flux Pavilion and MAX), \”Can\’t Hide\” (feat. Ashe) with Light House and \”When I\’m Down\” with Oliver Tree.

Before the show, we had the pleasure of sitting down with the young lad for an interview about where it began, what it was like at school and where it\’s going next. Check out the interview below:

How does it feel to be back in Chicago playing your own sold out show?

It feels really good because, honestly, it’s been a really long time since I’ve been home. I was making music all January in L.A., started the tour and going everywhere but home. Coming back home to play a show is so sick.

Aside from the tour, you’re stacking up a few festivals. Did you do some last year?

Dan, manager: This year we’re taking it easy but we’re doing a handful that we can’t really tell anyone yet. But next summer, he’ll be at every single one.

Do you have a favorite festival, whether you’ve played at it or just attended it as a fan?

Honestly, Lollapalooza. I just love it because it’s my hometown and I’ve usually gone with friends. To play it, it’s sick. It’s like a really good festival too and it’s not the only festival in the area that’s really crazy. It’s honestly really good and has everything.

In addition to this tour and festivals, you’re touring with The Chainsmokers. How’d you manage that?

I don’t know, it’s just the works of the music and my agent probably got the hookup. I know Alex and Drew, not super close but definitely know them and Alex is the man. I’m doing like 6-8 shows.

Let\’s rewind a little bit. How’d you get into music in the first place?

I always listened to music as a kid and played the violin in fourth grade but nothing serious. I dabbled in guitar, just never stuck with anything but I was always around music in some way. I kinda just found electronic music and I was so interested in how these songs are made. I just wanted to jump in and started getting software on the computer, so I did it and made music for probably like 5 years.

Your rise to fame has been really quick. When did you realize you “made it?”

I think it was honestly, my first time in L.A. I was just doing a couple of things, a show here and there. I was around the area with my friends and my manager, just getting into it and made some really good friends. I ended up in the studio with Skrillex one night, and this was so long ago, I was like “wow this is kinda crazy” and the next day I was back in school, back home. It was so crazy but that was one of the moments I was like “something’s going on here.”

Were you treated different at school because of it?

To be honest, a little bit. It was like a mystery, an unknown fact. People kinda hear what’s going on and friends I’ve known forever, it never even phased them but a lot of the new kids who would come to the school would kinda hear things and it just got kind of interesting. There were definitely some people who just treated me a little differently because they thought one thing but nothing too crazy.

Did you know Louis The Child pre-music? I know you’re both from the burbs.

I actually didn’t know Robby or Freddy before music. I knew their music but not them personally. I was just coming up and I was in talks with their manager. Their manager became my manager and we just became really good friends, and we’re close in age doing really similar stuff.

It appears you’re working on a ton of new music with some teasing here and there, and “Savage” has over 8 million listens on Spotify. What do you plan on doing with all of this unreleased music?

I’m working on an absurd amount of new music. I make so much music, it’s crazy. I’ve got stuff that’s not even considered Whethan, it’s its own with other producers, singers, and rappers. I produced a lot of music. I have a collaboration project with Oliver Tree. We have a whole album and just absurds amount of music but we’re probably going to compile together and put out an album in the next year hopefully. And even my stuff, I’ve got a pretty solid album myself so just have a lot of music to be released.

How did you and Oliver meet?

Oliver Tree: He found one of my songs and was like do you want to work with this kid that I manage? And I was like “no.”

Dan, manager: Then they hated each other.

Oliver Tree: No, I’m just kidding. We made a song and he basically decided that the best parts of it was all the scrap stuff that I didn’t mean to include in it so he uploaded the scrap and I was like “what is this, take this down, who is this guy? I’m going after him.” And then, basically, I had my lawyer contact his lawyer, it got pretty messy but then we were like “ alright, we’ll make one more song” and then we made two that night and ended up staying for next 4 days and made like 6 songs. Anytime he’d come to town, he’d cancel his other sessions and we’ve made lots of music. We made like 20 tracks.

Whethan: It’s all really different from my other stuff I have out.

What does your life look like outside of this?

Honestly at this point, it’s all music, traveling and touring but before, I was just a normal high school kid making music in my room, played on the hockey team at school and had a normal life until I decided to do all music. It got serious and now it’s all I do.

The Savage tour is still in full swing, with the next stop being San Francisco\’s 1015 Folsom tomorrow night. Catch Whethan and friends in a city near you. Find tickets here.