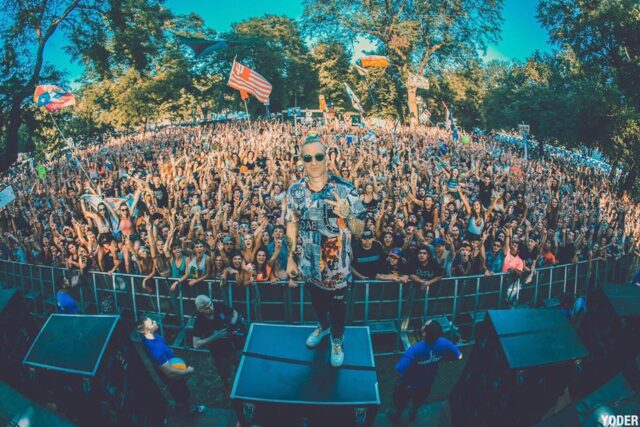 This past Saturday, fans rushed to the Coast Stage at North Coast Music Festival to catch trap master Brillz bring the energy up a notch with some Twonk. The Chicago show turned out to be one of the best of the entire weekend with a setlist that was second to none, an insane amount of bass and a lesson on friendship.

Shortly after the set was over, I had the pleasure of getting to know more about Sami Diament in an exclusive interview on his past, present and future in the music industry.

You’ve expressed in other interviews that you really started from the bottom. How did it all begin?

“Well, the part that the world knows is that I became friends with Kill The Noise and Craze, they had a label called Slow Roast Records and started playing out a lot of my tunes. Because those guys are very well respected, very successful, it gave me a lot of exposure and a lot of other big DJs started supporting my music. I had releases on OWSLA, Mad Decent and Slow Roast so those guys really put me on the map. This journey really got to the next level because of those guys.

But the part that no one knows is that before that, I was working on my music for years and years, just alone in a studio with no social life, no life. I didn’t even have an apartment for a while and lived in the studio. That’s really where it started. “

At what point did you feel like you “made it?” Was there a moment where you were like “wow, I’m in?”

“I think when I got booked to play EDC Chicago and it was my first festival ever. I was playing and at the end of my set, they had fireworks, I was like “damn, I’m playing EDC and there’s fireworks going on.” That was amazing.”

You were in the dance industry at some point, apart of a dance group.

“I came up as a raver on the East Coast and I was heavily influenced by the dance part of the culture. And also being a hip-hop kid, I was very influenced by breakdancing and popping. I was on a street dance team and we traveled all up and down the East Coast and we’d show up to events. You know, it was different back then. There was a lot more hip-hop culture in the dance element of raves. There would be like circles and a lot of b-boys. I need to do something to bring that back because I miss that.”

Was that before you started producing music?

“I was playing instruments in high school in different bands. I was a drummer and a bass player. I’ve always been involved in music, one way or another. Just being a hip-hop head, I was just into the culture in general. Turn tables, graffiti, b-boying, rapping, hip-hop, making beats, playing drums. Stuff like that.”

You have been everywhere this summer – EDC, Electric Forest…Do you have a favorite so far?

“Honestly, today was one of my favorites. I can’t wait to see the photos and videos. It was really fuckin’ dope. We were in the moment and everyone was having a good time. It felt very free, good vibes.”

You were at Red Rocks this summer, too. Was it your first time? What’s it like to play on stage, looking out into a crowd in such a beautiful place?

“I’ve been there before but it was my first time playing main stage. It’s very humbling, very surreal. It’s one of those moments where you kinda just pause to take it in. I felt very grateful, I always feel grateful, but I just felt very humbled that I got to play on a stage as legendary as that and that venue is very cool. And I killed it!”

What are the characteristics of Twonk?

“To me, Twonk is about being weird. It’s about embracing that next level attitude and forward thinking, pushing the boundaries. It’s also just about freedom of expression and also, aliens and how they’re real. It’s also what I like to call ignorant intelligence or intelligent ignorance. I don’t know yet, still figuring it out.”

How do you determine what to put in your sets? What are you thinking?

“I’m just thinking Twonk. Do I like this song? That’s it. I listen to it and if it gives me that satisfaction with the production, sound, tune. I’m so fortunate I’m surrounded by so many talented people that make good music. I just play a lot of the stuff that my friend’s make. Most of the time those guys really knock it out of the park. I DJ so much and play so many shows, I get to experiment so when I come to a festival, I’ve already tested out hundreds of songs so when I come to those, I already know 40 of my favorite.”

Where else do you draw your inspiration from?

“A big part of the inspiration is from the culture, the scene in general. It’s very forward thinking. There’s this mindset of just trying to push the boundaries. There’s so much creativity so there’s a lot of inspiration from that. I’m just so inspired by fashion and fashion designers. They make new collections every season and I try to put myself in that mindset. Just by all types of artists.”

Aside from music, what do you do when you’re not on tour or producing?

“When I’m on tour, I eat to live and when I’m at home, I live to eat. I like to go out and eat, exercise, hang out with my fiancée. When I’m on the road, we’re away so we try to do activities when I’m home. I hang out with my dog because he misses me too. I just work on music the rest of the time because there are really no days off.”

Any big plans in the near future we can look forward to?

“I’ve been working on a really special project for Twonk. That’s going to be a new thing that I can’t really say much more about but if you’re reading this, keep your eye on it. We’re putting out another clothing collection soon, which will be available for the holidays and stuff. And I’m planning another big tour for the spring.”