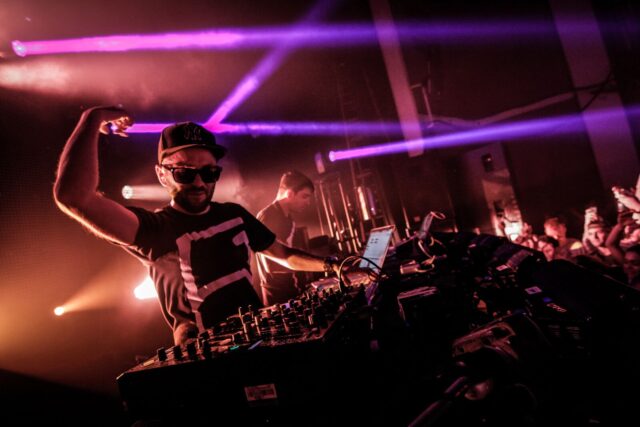 Denis Jasarevic, otherwise known as Gramatik, resides in the region of space-time where hip hop meets electronic soul-funk. This producer from Slovenia just began his Epigram Tour for his new EP but has been pioneering the electronic hip hop revolution for the last decade. Considering he is coming to the Aragon this Friday we wanted to learn more about this musical mastermind\’s long history with music, which began with his older sister\’s audio cassettes.

My sister is couple of years older than me and she was taping her music on audio cassettes. I would sneak in her room and listen to her cassettes. She introduced me to the music and my parents brought me my first synthesizer from their trip to Singapore. But the biggest inspiration was the introduction of hip hop music from the US, that’s when I started making beats.

His love for music would metamorphose into Lowtemp, his own record label  \”created by artists for artists\”. Among Jasarevic\’s many talents he always has his eyes peeled for new artists and he recently showcased his dedication to finding new talent with the release of the Electric Mantis remix of his track with Raekwon and Orlando Napier, \’Native Son\’.

We manage our own label and I’m constantly on the lookout for new talented producers. I stumbled upon Ramzoid, Medasin, Electric Mantis, and Great Dane through SoundCloud and they blew me away with their age and talent. I hit them up and asked them if they wanted to remix \”Native Son.\” What we got back is pure gold. As for the other remixes, The Noisy Freaks, ProbCause and The Geek x VRV had already released music on Lowtemp, so we invited them to be a part of this. I’m very stoked how the remixes came out.

When it comes to his music, Jasarevic revels in the freedom of being his own boss and not having to answer to anyone.

Lowtemp was established so I could release my music on my own terms and I could own my masters. At the time, I was living with Exmag and BRANX in Brooklyn and they were some of the first musicians to release on Lowtemp. Since then, we have released music by producers from different parts of the world. We have artists from the US, the Netherlands, France, New Zealand, and Slovenia releasing music through Lowtemp. It’s growing slowly since we’re not a traditional label; we release all our music for free which doesn’t work for everyone. Most of them tour and they make a living by playing shows. We’re bringing The Geek x VRV, The Noisy Freaks and Temu on the European run of the Epigram tour. BRANX and Andrew Block are touring with me in the States. We try to keep it in the family, and all these guys are awesome. I’m very happy to have them be a part of this.

Besides releasing parts of his Epigram EP this year, Gramatik showed a different side of his production when he wrote music for the short film, \’The Condor\’ with Luxas.

When I produce music for my albums I go for the funk and soul mixed with electronic music that can be enjoyed both at home or through big festival PAs. Making music for The Condor was something completely different. There are no drops, no build-ups, only ambience and atmosphere. It was a great experience, and I want to make more music like this in the future.

And he made a song on Probcause\’s new album, which was released on his label.

We did a song together before called ProbMatik Monster Stomp and I only produced one song for his album, but we have another one coming out on my next EP. He had an idea of featuring all these dope producers on one album and he wanted to release it on my label Lowtemp. Of course I said yes, this album is massive. I’ve always thought he’s a great MC, especially live as he demonstrated on my Leave Your Mark tour last year. I’m looking forward to working on more music with him.

When he\’s not in the studio he\’s headlining massive shows or jamming out with his friends like at the Griz After Party at Summerset this year, forming the awesome Grizmatik duo. The 30-year-old producer revealed there are some more artists he\’d like to collab with on stage.

Although Jasarevic\’s passion for music is quite strong, it doesn\’t consume his life totally. Gramatik\’s heart also belongs to the environment and the pursuit of a just government. He also has a great admiration for Nikola Tesla, the famous inventor and thinker.

The world would be a better place if people like Nikola Tesla wouldn’t have been stopped by greedy corporations, and if governments would actually work for the people, not against them. Imagine the world according to Nikola Tesla, where the electric power would be free and we would never fight wars for oil or poison the planet with CO gasses. We could prevent the global warming, wars, famine, refugee crisis and so on. But we get the world we deserve. We haven’t done anything to avoid this, we’ve even participated in it. When the time comes, we’ll all act surprised, but the truth is we never stood up to the one percent and stopped them, because it was so convenient for us to have money and use Earth’s resources for our selfish needs. I’d like to be wrong, but I’m probably not.

Now that we know the ins and outs of Gramatik, we can properly prepare to get the funk down with him at the Aragon this Friday for the Chicago stop of his Epigram tour. According to him, it\’s going to be a blast.

We just finished building and programming the new Epigram production in Nashville and it looks amazing. Andrew Block is coming back to shred guitar and we have Big Wild and BRANX opening. We added Minnesota and Great Dane in Chicago and The Shady Horns from Lettuce are joining me and Andrew on the stage to bring you the heaviest dose of funk.

Tonya Keller - July 2, 2020 0
Augmented Reality and Virtual Reality are the two evolving technologies transforming the world for good. Both are often used in conjunction, and many may...

Ways to Use Kratom For Depression And Anxiety

How Long Does it take for a Canadian Visa to be...

Should you Sell your Home to an iBuyer?