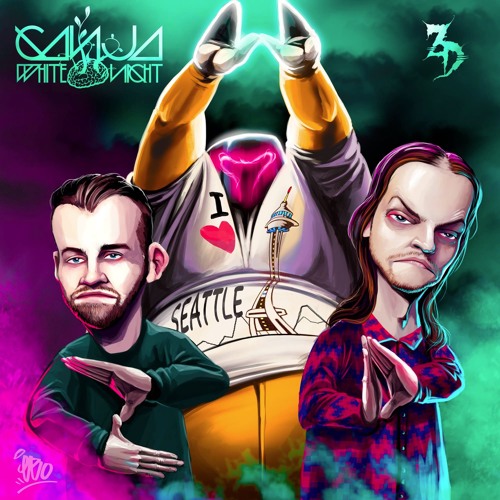 The Belgian Wobble Brothers and our favorite Dead Boys are back with a vengence. Ganja White Night and Zeds Dead have finally released their new collaboration “Samurai” off of Ganja White Nights new album, The Origins, and it is not what you think. Zeds Dead announced the collaboration with the Waffle Brothers via twitter and everyone obviously lost their minds. The song has the style we have come to expect of both duos.

Billboard got a sneak peak of the track on January 30th, and according to the page, this had been in the works since both groups played together last year:

“We had the pleasure of playing a few shows with the GWN guys last year, and quickly felt that we shared a vibe,” Zeds Dead adds. “I think we both are interested in incorporating different emotions into bass music and figuring out how to create a journey through more than one energy and feeling. Dubstep is such a versatile genre, you can explore so many different sounds and influences while staying within a general framework. This is our spin on a classic concept.”

The track opens with calming piano chords and triplets eventually morphing into a angelic voice that we have come to hear in many Ganja White Night track. It then drops us into a nice dubstep beat, only to break down into a more intense drum beat and eventually giving us the bass heavy wobbles we have come to love from both duos. It’s been a while since a track has come like this, melodic and heavy. But between Zeds Dead’s Northern Lights remix album and the upcoming Ganja White Night album out February 5th, this year is sure to be full of beautiful pieces like this one.

Both groups are touring right now, be sure to check them out. Ganja’s The Origins Tour is sure to be wild. Look below for info. Here is a tweet of Ganja White Night flipping off Drumpf Tower.

Heres a tweet of Ganja White Night flipping off Drumpf Tower. Much love.