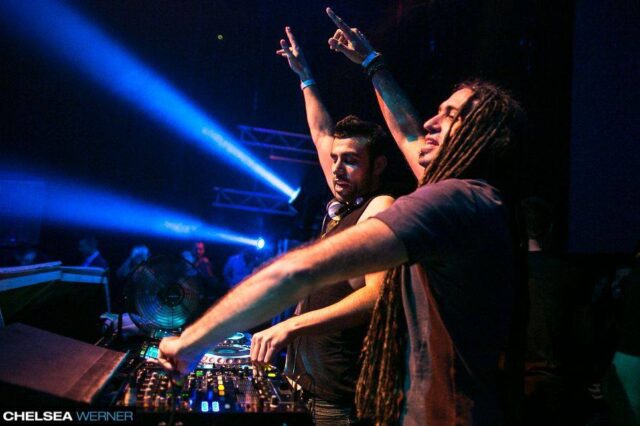 Sultan + Shepard are no strangers to good music. Once called \”kings of the progressive scene\” by Beatport, the title certainly lends credence to the fact that they know their way around dance music. But given their diverse track record of remixes and collaborations from working with Dillon Francis to Tegan and Sara, it\’s apparent that regardless of genre, Sultan + Shepard simply know good music when they hear it. The success of their releases from collaborating with artists of many different backgrounds while managing to stay true to their own sound at the same time remains a testament to this. Before their set at the Mid in Chicago, I had the pleasure of sitting down with the duo to discuss their past and future endeavors.

EDMC: Let\’s get right to it, guys. Your latest single is called \’In the Night\’. I thought it was interesting that there were no vocals on it, just because so many of your other songs have had them, but we\’re told there will, in fact, be a vocal mix of that?

Shepard: Yep. There will be a vocal mix, it\’ll be out in two weeks. It’s with Lauren Mason.

EDMC: Thanks a lot. Now, going back to your background a bit. I feel like a lot of people know you guys from having had that Bruno Mars remix that got you guys to the Grammy\’s. But you guys have worked with so many other Indie Acts too, do you guys listen to that when you\’re not listening to dance music?

Shepard: Yeah. That\’s a lot of the music that we listen to, for sure. We love Indie Rock and we lived in Canada for a long time, so the Indie scene is really good there and we got exposed to a lot of new music… [We like] Ryn Weaver, she\’s a new artist. She\’s put out albums and stuff. Jamie XX is dope. That\’s kind of dance music but–

Sultan: Of Monsters and Men.

Shepard: Yeah, Monsters and Men. What else?

Sultan: We pretty much listen to all kinds of stuff.

Shepard: Yeah, I was listening to Tom Petty today, which was pretty great. Although, apparently, he doesn\’t like people playing electronic music much.

EDMC: I can see that; it doesn\’t surprise me.

Sultan: I listen to Pearl Jam every morning playing basketball.

EDMC: Nice, so a little bit of everything. You guys have certainly had your pick in terms of who you\’d like to work with. Is there anyone you would like to work with, dance or not dance related that you haven\’t yet?

Shepard: I like Keisza a lot. I think she\’s got a great voice.

Sultan: We always wanted to work with Showtek; we\’re working with them now.

Sultan: I want to meet Slash. A collaboration with Slash…

EDMC: Is there anyone else in the dance music realm you guys would really like to collaborate with or did you have a favorite in terms of people you\’ve all ready worked with who you\’d like to work with again?

Shepard: Yeah, we\’re probably going to do something again with Fedde… We talked about doing something else with Dillon, we have to find something cool. We had a good time working on that project with him.

EDMC: Yeah, I feel like there must have been some stories to come out of that.

Shepard: It was a lot of fun.

Sultan: Tell some stories from the video shoot. That was probably the best part.

EDMC: Festival crowd vs. club crowd: do you guys have a favorite?

Shepard: They\’re different, it\’s like apples and oranges. Sometimes club crowds are better because they\’re very intimate and you\’ve just got the one room, no one is going anywhere, and it creates more of a vibe.

Sultan: We play a lot more clubs than we do festivals.

EDMC: Since you guys have been in the club scene a lot, and they are so intimate, has there been anything crazy that\’s happened on tour that you guys would like to share?

EDMC: (laughs) I\’ll be honest, that wasn\’t what I was expecting. You get wild card points for that one.

EDMC: You guys have achieved so much already in your careers, are there any more goals you still hope to achieve in this industry?

Sultan: We just want our music to reach as many people as possible. That\’s the most important thing for us.

Shepard: As long as we\’re doing that, we\’re happy.

Sultan: We\’re working with Nadia Ali for one of them.

Shepard: We also just recorded something with the singer from Boxer Rebellion. He\’s really great, he\’s another Indie man. So yeah, we\’re just working on some stuff that\’s going to come out later this year, and it\’s going to be cool.

EDMC: Awesome, good stuff. Thanks for joining us.

Sultan and Shepard delivered yet another memorable set at the Mid in their third appearance at the club to date. As we eagerly await their new music set to come out later this year, check out their newly released track \”In the Night\” below, now available on Beatport. Finally, a big thanks again to Sultan and Shepard for taking the interview; we certainly look forward to hearing more of their great work in the future.