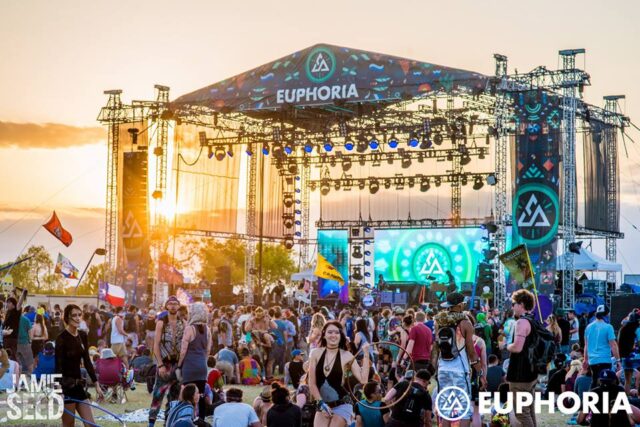 Didn\’t make it down to Texas this year for the 5th anniversary of Euphoria Music Festival? Well, you definitely messed up.

The vibes at this event (a Vivid Sound Entertainment production) are pretty stellar and get better with each passing year, even as the crowds grow larger and the headliners more massive. What this festival has tapped into so well is the very essence of Austin, where you can drive 5 minutes away to escape the city; along with capturing the beauty of Carson Creek Ranch, a majestic wooded venue on the banks of the Brazos River and a hop-skip-and-jump away from the airport. (Note to organizers: It\’s just not Euphoria without the Dragonfly Stage and planes flying low overhead).

But, don\’t take my word for any of it. After all, pictures speak a thousand words. That\’s why we\’ve gathered a few key memories captured at the 2016 gathering (thanks for Jamie Seed Photography) that really speak to what it means to \”Find Your Euphoria.\”

(1) The After Hours Silent Disco

The after hours stage (available only to attendees with camping wristbands) underwent some vast improvements for 2016 in terms of both concept and design. Whoever thought to transform this little forest clearing into vibrant silent disco should get an immediate promotion and raise.

In fact, the most memorable mental snapshot I took away from the entire weekend was watching hundreds of glowing heads bobbing in unison under a floating disco ball. I wasn\’t sure if the frog croaking and cricket churping was a natural occurrence from the nearby creek runoff or from an ambient track on repeat, but it really brought the space to life.

Where else can you hear producers by the likes of LOUDPVCK and Crizzly spinning surprise sets until 6am?

The festival grounds underwent a major overhaul in terms of layout, mostly to accommodate for more attendees, and also due to land acquisitions that required relocating the camping entrance to the main festival entrance. This amassed a lot of grumpy wooks and heady frowns along the massive trek along rocky hills from the parking lot to the camping grounds themselves. It even brought up memories of the TomorrowWorld\’s \”trail of tears\” for me — although it was not nearly as bad as Chattahoochee Hills.

The stages were more spread apart this year, which required more walking distance between stages than last year but also allowed for less sound interference. Still, the walk was minuscule when compared to other fests I have attended…and you won\’t get bombarded by cattle crowds.

At the Euphoria (main) stage, a huge LED screen was set up behind the sound booth, which allowed attendees standing behind the (usually annoying, yet necessary) structure to catch full close-ups on the artist(s) during the set.

My favorite thing about Euphoria is that there is no \”main stage\” really. For instance, I was able to catch Eric Prydz and Dillon Francis on the Elements Stage (pictured above). The best thing about the Elements stage, however, was the tent like structures surrounding the sound booth area, which really captured the bass from the stage well and improved the overall sound quality.

Ah, the Dragonfly Stage! A yearly festival favorite. It certainly would not be Euphoria without this beautiful amphitheater overlooking the river.

Whether its the spacious trees to install your own hammocks off to the side, or the unique integration of lighting and stage design into the natural elements, this stage will just draw you in and won\’t let go.

On the tree banks of the Brazos, high lumen projectors were used for imaging some pretty intense and captivating visuals and quickly became the talk of the weekend!

I have to be honest here: I\’ve never been to a better vibes fest than Euphoria (yes, and I\’ve been to the Forest). At one point, I lost my wallet with $500 inside…it was returned with everything. Not sure how many festivals can match this feeling I experienced at the Lost & Found booth.

My favorite this about this festival is how intimate it remained in 2016, and this is no doubt because of the many improvements that were made for growth! You\’ll want to make sure to get out down to Austin, Texas because I have a feeling 2017 is going to be bigger and better!