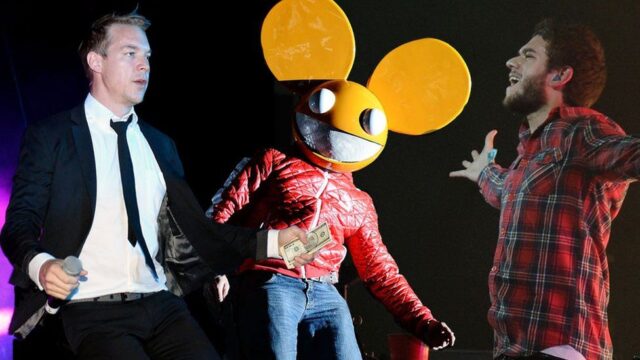 It seems deadmau5 has started a whole new trend outside of making good house music. After Ultra 2016, Twitter officially became the battle grounds for EDM producers to fire off at one another (and fans a like). The most recent back-and-forth brawl to make waves today was between Diplo and Zedd — but the outspoken Twitter troll king himself was sure to offer up his snarky \”two cents\” in 140 characters or less.

The argument began when Diplo blasted Zedd over social media by insinuating Zedd\’s newly-released song with Aloe Blacc, \”Candyman,\” made him a corporate sell-out. The Jack Ü producer even goes as far as to call the video a Flume rip-off.

Granted, the song — which was a reconfiguration of an old classic (as well as an ad for M&Ms) — did make us all start scratching our chins. The song seemed rushed and poppy, to be sure; but, hey, Zedd made bank for short-and-sweet side project. Despite the merit to Diplo\’s tweet, the \”Bieber boy believer\” himself has little room to talk; and even less room to believe that Twitter is the appropriate medium to begin any sort of dialogue about career advice. Thus, Zedd rightfully (albeit not so maturely) fired back.

@diplo stop being a jealous little bitch and do us all a favor and just shut the fuck up.
Thank you. 🙂

And if that wasn\’t enough D-R-A-M-A for you, check out how deadmau5 decided to ruffle a few more feathers and come to Zedd\’s aid.

..unless it\’s a bieber collab… Coz that\’s in no way, about money. We all know zedds shit sucks. But we love him. https://t.co/aYQ7k6ylNX

Literally hopped off Justin\’s dick to say someone\’s shit is about money? God DAMN I love Twitter. I do.

OH GOD WHY ARE ALL MY FAVORITE POP STARS FIGHTING? 😂

As Diplo carries on, it becomes more and more clear that the new Grammy winner\’s remarks were less about \”helping out a young artist\” and more about his ego. Granted, Zedd\’s responses were no better. Funny how things can change so quickly in \”the industry.\”