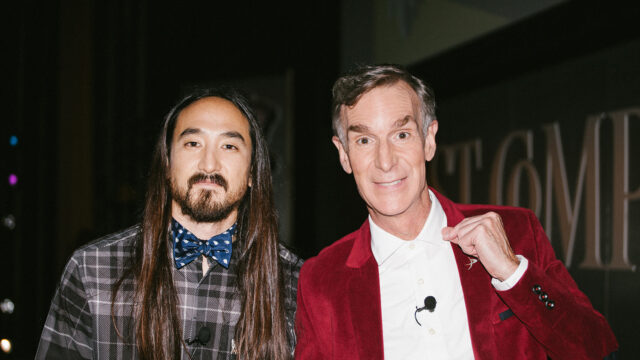 Bill Nye is not the archetypal science guy you thought he was. Seems like Nye is making some transformations from experimenting with science, to experiment with music. Recently at the Fast Company Innovation Festival, Nye and artist Steve Aoki talked about a variety of issues, including the influence of science and technology in their careers.

Aoki has always had an appreciation for the scientific world. With his song, \”Back To Earth,\” Aoki said, “I was trying to find a way to collaborate the ideas of science that interests me and my music. The best way to do that is not just through music but through music videos. Fusing those ideas with the music made it more fun. It’s great to be able to use it as a tool to discuss something. ”

According to Aoki the EDM artist plans on bringing more to the table than a neutral space. He wants to talk more about sophisticated issues than just raging at a festival. Nye and Aoki have begun to collab on writing a science-themed song on Aoki\’s new album \”Noble Gas.\”

The track that Nye is contributing to is supposedly set to the theme from The Twilight Zone. “The song would start with exploding super novae, then lead to us. And that means that the fact that you and I are made of stardust is one of the ways that the universe knows itself, \” said Nye.

Looks like everyone\’s favorite science guy could be picking up a new hobby that might just take off. I\’m interested in what the final product will sound like and can\’t wait to hear more about Nye\’s moves in the EDM industry.