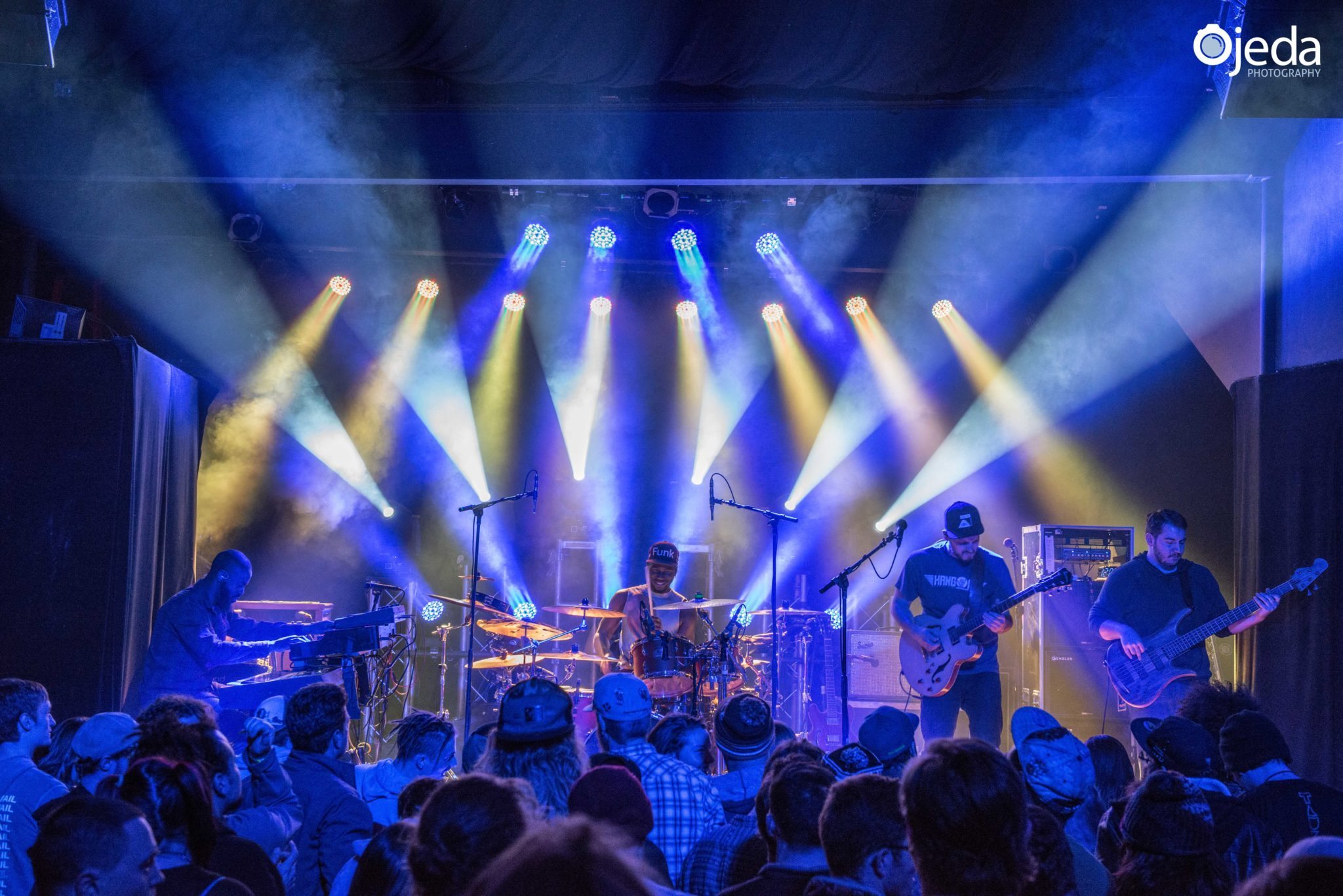 New York funk-rockers extraordinaire TAUK hit Chicago’s own Concord Music Hall on April 13 for a night of jams and new music. The quartet is touring behind their newest EP, Shapeshifter 1: Construct, the first half of their two-part EP release. The evening featured new hits from the recent EP release, a constantly dancing crowd, and seriously impressive light shows through set one and set two.

It truly seems impossible to not enjoy yourself in the crowd at a TAUK show. From brilliant compositions to radiating positivity, TAUK constantly brings the party with them wherever they go.

I was lucky enough to sit down with Charlie (bass) and Isaac (drums) for a ten minute chat about their Shapeshifter 1: Construct EP, being on the road, and what TAUK has in store for the future. Check out our interview below, and make sure to keep your eyes peeled for the band’s second EP installment in the future.

Thank you for sitting down with me and chatting about the EP release and your show tonight! Tonight is another release show for your newest EP, Shapeshifter 1: Construct. Did you find yourself experimenting with new styles, or did you more or less stick to the TAUK that everyone knows and loves?

Charlie: This EP is a greater project…it’s part one of a two part series. We’re going to be putting out another release in the fall. We went into the studio looking to do one piece, and we ended up having so much material that we recorded all of it and ultimately decided to split it up. We see this group of songs as a good statement by itself. We definitely went in a much different direction than we have in the past, and recording it all in one place played a big factor in that. I’m really happy with the result.

Isaac: It’s always a surprise what’s going to happen at the show. We always try to have a good time and make the dynamic as grand as possible. If you’re interested to see what we do, you’re just going to have to come to the show.

Isaac, to follow that, you’re a totally animated drummer. You kill it on stage, you’re always going wild. Have you always been that way? Is that something you’ve always wanted to bring to your performances?

Isaac: I mean, I think I’m just an animated person in general. I love being behind my drums…I feel like I’m on my own island. I can be the king of the island, and it’s super therapeutic. I can leave all troubles, worries and stress behind. It’s always a good time when I get to play music, whether it’s in front of 3000 people or in front of no one. I could be in my apartment and have the same joy as I would in front of anyone else.

As a large fan of Umphrey’s McGee, and speaking about TAUKing McGee, what do you like about working with them, and do you see yourself collaborating with any other bands in the future in the same way?

Isaac: Working with Umphrey’s taught us a lot. Our first tour with them was back in 2015, we did a whole west coast run with them. They taught us about the professionalism of each and every day of touring. Seeing how they do that, and their work ethic made a huge impression on us. To have longevity in this career…you want to be able to stay hungry and humble. We saw that in them, and wanted to feed off of that same energy.

Are there any up and comers that you two think should be on our radar?

Charlie: There’s been a lot of good opening bands on our bills recently. We put a lot of effort into having bands we really like come out and play with us. This band PHO played a couple nights, definitely check them out. Naughty Professor is another one. They played horns on the EP and have also done a bunch of shows with us, they’re really great.

Isaac: Dynamo is another band out of New Orleans – they have amazing compositions. And another one I’d like to collab more with is Jaw Gems. They have a great feel for music and I appreciate what they do.

When you all sit down, do you all just start jamming and go with the flow, or is there more of a process behind it? How do you make YOUR songs?

Charlie: One of the great things about the way we do things is that there’s not just one way to do it. It could be one of us bringing in a whole song or just a single idea and working off of that. There always ends up being bits and pieces of things in the back of our minds where we think “oh, could we throw that in a song somewhere?” It really can be totally organically where everyone is throwing things in and we’re all figuring it out collectively, or it can be one individual doing the work and coming up with an entire song themselves. And everybody has been doing it, and that’s definitely what has contributed to why we had so much material going into this album and how our sound is expanding. We all had so many different things to say, but we found a way to be able to say it together.

I saw you guys recently got added to Tribe’s 2-night run at Red Rocks. Is there anything special you’re planning on doing for that particular performance?

Charlie: We are super excited since that’s one of the first shows we’ll be able to play some of the new material. That’s around when we’re going to release the full record…and I’m already so excited for that. We have all of this new stuff that the crowd will really like. It’s really hard to sit on it.

A huge thanks to TAUK for taking the time to sit down with EDM Chicago! We wish you the best on the rest of your tour, and hopefully we’ll catch you again soon.