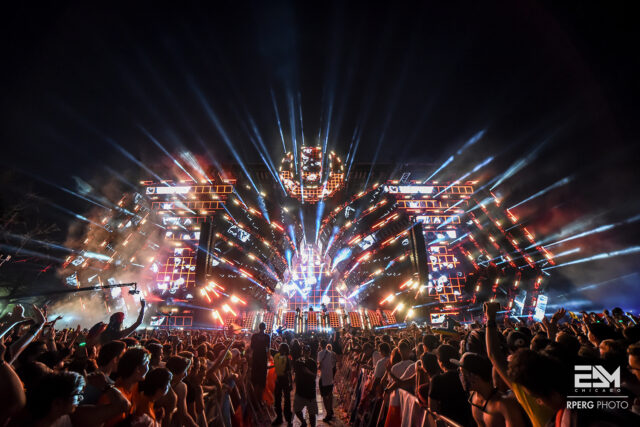 Beach bunnies and bass filled the air during Miami Music Week, leading into one of the most amazing music festival productions in the entire world; Ultra Music Festival. Returning for the second time this year, I had come to take on Ultra 2016 with other members of the EDM Chicago team. The familiar Biscayne Boulevard was comforting to see when the sea of shorts, crop tops, and Camel-baks weaved through the barricades to enter the festival. As soon as you entered the gates, the stages shine bright and the bass just vibrates through the air. Wandering around, I noticed a few updates to the festival, modernizing it to a whole new level. The addition of a wifi network an incredible upgrade, but the live updated set-board and interactive map was hands down, the most impressive change. Being able to see a rotating map of the festival as well as seeing the scroll through of all of the set times with location and artist name was something incredible that truly showed the potential of bringing together top notch technology into the music industry.

Friday started off on a high note; high energy and the mass of international flags were abundant throughout the festival grounds. Main stage held Kygo\’s performance for the first time in Ultra history and with his new album that just came out last friday, the crowd was hungry at UMF, eating up every unreleased track that Kygo had in store. Later in the day, DJ snake also held one of the most attended sets of the weekend. Introducing plenty of jungle terror and also some trap influence, DJ Snake\’s set was one for the books. The  first night closed off with none other than Martin Garrix. Garrix released numerous amounts of ID\’s but brought a major show that showcased his sky-rocketing success since Ultra 2015.

Day 2 came around as an even more hard-hitting success than the first. Steve Angello took on the stage earlier on in the day, bringing in some old school tracks that were quite familiar to festival attendees. Tiesto got the sunset spot that helped feature some of his old hits as well as his new masterpieces like \’Making Me Dizzy\’. Starting off his set with Vassy\’s live performance, the use of live vocals truly revolutionized his set into being very performance based. Saturday also featured artists that have brought a new genre to the surface in the world of EDM. Valentino Khan\’s and Wiwek\’s performances at Ultra were so incredible that jungle terror influence has been making significant influences on plenty of dj\’s sets and new tracks.

Sunday also closed out the weekend with nothing but utter success. Zedd and Pendulum Knife Party overtook the Main Stage, making the whole bay front shake with the bass of the music. Other house legends such as Duke Dumont and Tchami also took over Sunday with some amazing performances. All in all, the festival was nothing short of breathtaking, it always it. Every year it seems to become better and better. Somehow, the people, the music, the atmosphere is completely incomparable to any other festival in the world. Until next year Miami…

Below are some amazing photos taken by the one and only RPerg Photo: rpergphoto.com