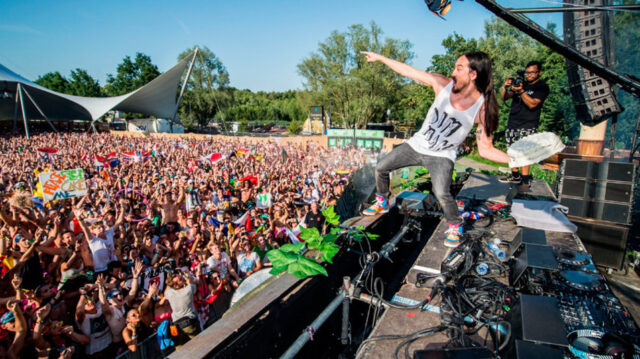 Known for his high energy shows and lively performances, Steve Aoki is a king of both music and entertainment. Involving crowd surfing on a raft and pelting people with cake, Aoki brings a hype element to every single one of his shows. One of the fans though, Raymond Collins, wasn\’t feeling too celebratory at one his shows and is now suing Aoki for a cake-related injury  sustained from a show in Las Vegas last March. Collins reported that the cake hadn\’t hit him directly but he did slip on the cake after it hit the floor, sustaining a \”serious head injury\”.

But this isn\’t Aoki\’s first rodeo. Back in May of last year, he was presented with a lawsuit after a stage dive ended up breaking a fan\’s neck. While some cake with frosting may not be as detrimental as a snapped neck, the fan is taking the matter to be very serious. The plaintiff is seeking damages for loss of income, mental suffering, and loss of enjoyment of life.

I guess Steve Aoki forgot that not all of his fans are boneless.