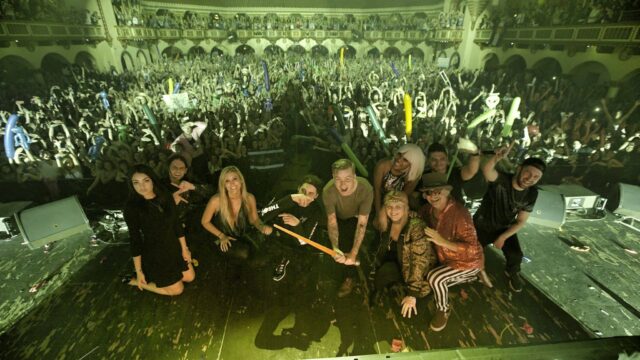 December 31st 2014: While some were getting ready for a family night out or getting ready for the bar, 4,500 aliens, space queens, and astronauts filled the streets of Chicago. This New Years Eve \”Space Oddity\” dance party was definitely one for the books. Canadian mad men Zeds Dead along with friends Jauz and Djemba Djemba headlined a sold out show and Ernest Blount was the opener at 8 pm.

Jauz hyped up very well. Playing a mix of trap, deep house, and heavy bass music, the crowd was very pleased. He played a trap remix of \”Coco\” by O.T Genasis  and new music collab with Borgore \”Lindsey Lohan\”. He also kept it old school and repped OG Chicago freestyle roots by dropping his Debbie Deb remix of \”When I Hear Music\”, super props to him.

Djemba Djemba played a mix of trap with a few moments of drum and bass. I didn\’t catch much of Djemba Djemba due to the overwhelming amount of trap. Trap is good, but booking two trap artists and hearing the same 808 and kicks & snares gets a little old.  A little more variety from Djemba Djemba would have been more impressive.

Zeds Dead took the stage approximately around 11:25 pm, starting off the set with an epic movie style orchestra opening and coming out in their full space suit gear. The variety of music they played was outstanding. They included new music from their Somewhere Else album, \”Rebels Theme\” by Flux Pavilion, and a lot of old Zeds Dead goodies. \”Crank\” from the album Living Dead, \”Demons\” and \”Trouble\” from Hot Sauce, \”Bassmentality\” with Killabits, and fan favorites \”White Satin\” and \”Rudeboy\”. The boys also gave us a special treat and played a phenomenal unreleased remix of Jimi Hendrix\’ \”Purple Haze\”, I guarantee every hippie in the crowd felt on top of the world because I know I did!  Closer to the end of the night Zeds Dead slowed it down and played \”Eyes on Fire\” and left a beautiful sight to see while people in the crowd filled the sky with lighters. Finally, once people started leaving the dance floor Zach and Dylan came back out to play us one last song. They chose \”Take U There\” to play for their encore, and immediately the room went crazy. It was really an amazing way to finish the show, a great song to fill us all with great energy to start us off for 2015.

We can\’t forget about the stage setup too. Graphics were intense, and very intricate. REACT set up 3 layers of screens to give the visuals a 3D effect, and it payed off! While Zeds Dead played \”Ratchet\” the screens had a ratchet, literally a ratchet tool from your garage. I hope it made others laugh as much as I did! Graphics included a lot of outer space themes, meteorites, stars, DMT like fractal designs, and alien goddesses.

In conclusion, I think they show was a complete success! Honestly, what else would you expect from Zeds Dead? And for Jauz and Djemba Djemba, I see big things coming.  Stay Deadicated fam.