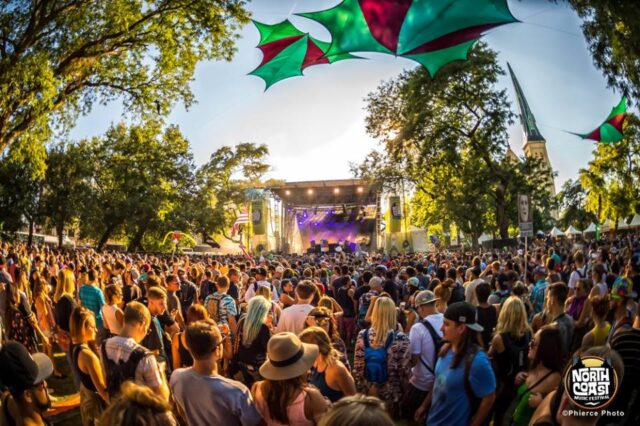 For most people, Labor Day weekend means eating BBQ food, spending quality time with family and taking it easy. This isn\’t the case for festival goers that reside in Chicago and the surrounding areas. North Coast Music Festival, also referred to as Summer\’s Last Stand, takes advantage of the long weekend to provide three days of music, art, energy and good vibes in the beautiful Union Park.

In a city that is known to bring top performers to festivals throughout the summer, like Spring Awakening and Lollapalooza, North Coast sets itself apart by curating a diverse lineup that supports local, raw talent in addition to widely-known headliners. To further add to the experience, the festival attracts art enthusiasts with their Living Art Gallery and the new pop-up gallery.

This years event took off on Friday, September 2nd. It was pleasantly warm out and unlike many weekday lineups, this one was stacked. My first stop was at the Coast Stage to catch Australian duo Hermitude. As usual, Luke Dubs and El Gusto threw down funky beats with synths, drum machines, turn tables and even a key-tar. The crowd was grooving to the music from the very start but when the Flume remix of \”HyperParadise\” came on, there was a burst of energy that radiated throughout. In between songs, there was a serious moment where the two made it a point to let the crowd know that they weren\’t just up there pushing buttons but actually making their music live. The two also paid homage to the headliner of the day, ODESZA with their reworking of \”Say My Name\” (feat. Zyra).

On my way over to the North Stage, I stopped by to catch the last of Louis Futon\’s set. The crowd was in sync, swaying and singing along to his hit \”Wasted On You\” (feat. ROZES). The Philadelphia producer has only risen to fame within the last two years so it was inspiring to see him on a main stage with so many devoted fans, front and center. At the adjacent stage, Baauer brought out his best dirty trap beats and really got the party started.

A set I was particularly looking forward to this weekend was Galantis. Fans packed into the stage to watch the Swedish duo play their biggest hits like \”Runaway (U and I)\” and \”No Money\” along with crowd pleasers like The Chainsmokers \”Roses.\” The two took turns manning the table and enhancing their performance with drumsticks.

The next big set for me was ODESZA. In the meantime, I decided to explore the Silent Disco/Living Art Gallery. I flipped on my headphone switch to the ambient yet melodic tunes of Edamame as I watched artists in action. If you haven\’t had a chance to check out the new addition to Emancipator\’s Loci Records, you definitely should.

I couldn\’t think of a better way to wrap up the night than with ODESZA. The two were stationed on elevated keyboard/drum set ups and were accompanied by a variety of live instruments throughout the set. At one point, the stage lit up green and The Stampede, the Chicago Bulls drumline, came out. Chills radiated through my spine throughout the performance and it was safe to say, my day one experience was complete.

Day 2 for me began with the funky trio Future Rock on the Coast Stage. Their smooth, electronic beats combined with bass guitar, keyboard and solid percussion was an ideal way to get my body moving for the remainder of the day. But this was the calm before the storm. Next up was Brillz, who brought his trap game to the stage and succeeded in getting the crowd as Twonked as possible. I was fortunate enough to interview the East Coast artist later in the day and discuss his past, present and future in the music industry.

Another highlight of the day was Keys N Krates, which turned out to be one of my favorite sets of the weekend. The three dove deep into their heavy bass roots with Adam Tune\’s powerful drumming, Matisse\’s keyboarding and some old school flare from turntablist Jr. Flo, which was especially mesmerizing. The ground shook with every beat to the drum and I was in awe. As I strolled over to the main stage after, there were fans darting from every direction to get a spot for the one and only, Bassnectar.

Bassnectar hit the stage with \”Music is the Drug\” and just as the crowd got going, the stage malfunctioned three times. Once resolved, the hype was back and the performance went without a hitch. This evening may have been the most crowded I have ever seen NCMF with a sea of fans that flooded the stage, reaching back to the Heineken House.

As I entered through the gates on Day 3, I couldn\’t help but skip my way over to the Skyline Stage to see Zomboy, as I had been waiting all summer to see him. The set started out on a high note with the new VIP of \”Like A Bitch\” and just got better from there, without a still body in sight. There was twerking, head banging, moshing, jumping and everything in between from the second the show took off. He played bangers like \”Miles Away\” (ft. Nefera) and \”Nuclear\” but also current favorites like Skrillex and Rick Ross\’ \”Purple Lamborghini\” and DJ Snake\’s \”Propaganda.\”

Next up for me was Norwegian DJ/producer, Matoma and his performance solidified all the reasons we\’re seeing him grow so much in the industry. He brings so much life into his performance with his tropical house beats but also with the constant appreciation that he shows his fans. It was good vibes throughout with his fan favorites like  \”False Alarm\” (ft. Becky Hill) and his amazing version of \”Old Thing Back\”  to close out.

After Matoma, I wandered from stage to stage, anxiously awaiting for Zedd. As soon as 8:30pm hit, the crowd roared and the hypnotizing visuals began to the sound of the \”Beautiful Now.\”  Throughout the set, Zedd played Top 40 hits like \”Closer\” and \”Don\’t Let Me Down\” by The Chainsmokers in between his own like \”Stay the Night\” (ft. Hayley Williams) and \”Clarity.\” While his music is certaintly for the soul, his graphics and lasers bring everything to a whole new level. Just as we were wishing this night would never end, Summer\’s Last Stand went out with a bang.

Year after year, North Coast Music Festival continues to be my favorite Chicago festival. From the impressive lineups to the art opportunities, the partnerships and the overall production, React Presents truly does an amazing job.

Thank you for another unforgettable weekend!