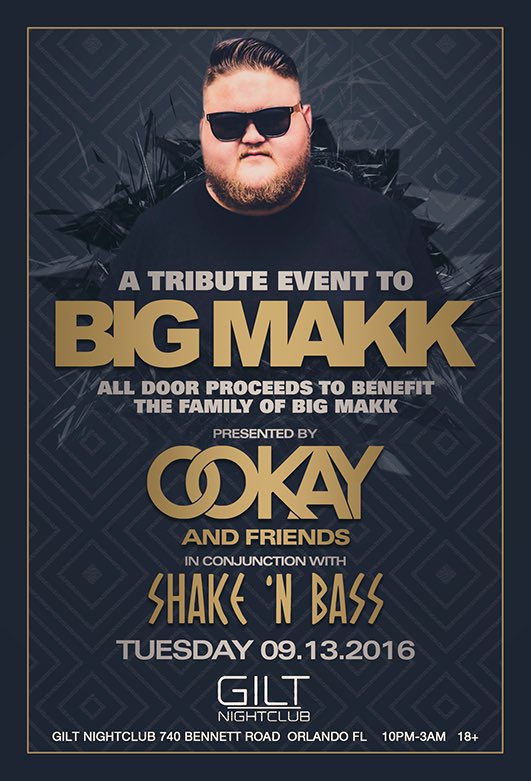 Earlier this week on the 29th of August, the electronic dance music community shared their farewells and celebrated the gifts of young Florida producer, Big Makk, who left us too soon following a fatal car accident. Many of Makk’s peers took to Twitter to express their heavy hearts and comment on the beautiful humanity Makk embodied. One producer in particular who presumably had a close relationship with Makk is the San Diego based producer, Ookay. The day of Big Makk’s passing, Ookay released a tribute song, ‘Back Again’, touching the hearts of the electronic music community and empathize with the sorrow he felt for his lost pal.
Today, Ookay extended his compassion and love for his friend by announcing a tribute event for Big Makk’s family. The event is scheduled for Tuesday September 13th at Gilt Nightclub in Orlando, Florida, the city where Big Makk’s debut performance was booked (EDC Orlando). Ookay’s genuinely kind and thoughtful gesture deserves high praise along with his undying friendship for Makk. We truly hope the event starts and ends as an unforgettable night where Big Makk’s friends and fans from all around gather to create an everlasting memory in honor of the music and love he shared.

Surprise. Had to come correct for my boy Makk. I'll see you soon Orlando. Let's party for the boy. He'd want that. pic.twitter.com/KJ0CoLXAFO