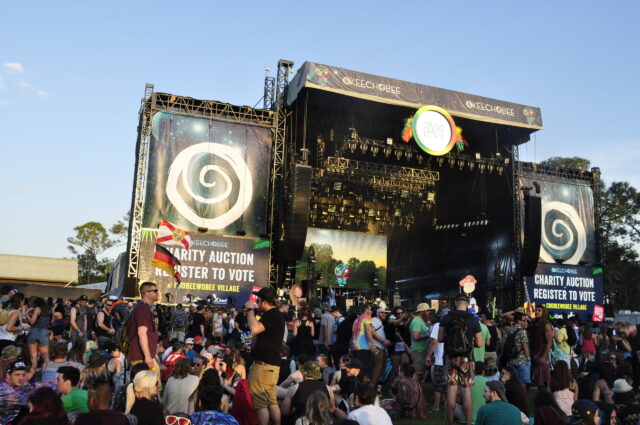 Once festival season is over, concert goers cannot wait to get back into festival mode. While the season usually begins with the Ultra Music Festival, the Okeechobee Music and Arts Festival in Lake Okeechobee, Florida, took the reins and started this year’s festival season in high gear.

For its first year, Okeechobee was highly impressive, as it was sold out. This is hard to attain for a first year festival. From the start, Okeechobee had a variety of artists and music styles in its lineup. Styles ranged from rap and dubstep to jam bands and legends. For its first year, I was impressed by how organized the festival was. If an artist cancelled, the staff was quick to replace them.

Okeechobee was magical for a few key reasons: the venue, the art, and the music.

The venue was huge. Okeechobee was a camping festival, which can be positive or negative, depending on the person. I personally love the community feeling of camping out with other people at the festival. Immediately, I made friends with my neighbors. I thought the crowd was great. Okeechobee didn’t have landmarks, which I think would have been necessary. On the first night, I spent almost two hours looking for my campsite. It would have been helpful to have some type of sign or flag indicating what lot I was in. I would ask staff members for assistance, but they didn’t even know where to direct me; it was easy to get lost.

Okeechobee is both a music and arts festival. The festival offered a variation of arts and activities, such as morning yoga or a daytime massage in the healing sanctuary. There were many workshops at Yogachobee, such as poetry slams and hula hoop workshops. There was a designated tea area and a beach with a bar and a stage for live DJs and bands. There was cool artwork around the area, such as the flaming snowman or the igloo tents. You could purchase art and clothing from vendors.

What I found most captivating about Okeechobee was its political presence. Aside from a plethora of Bernie and Trump totems, I could tell that festival goers actually cared about politics. Many of the artists were advocating for young people to vote; some were even voicing their political standpoint. The festival even had a voter registration booth! Quite the political statement for a music festival.

The variety of artists created a very diverse audience. There were babies, kids, young adults, and older people. There are people that get upset at “all age” festivals, but that definitely didn’t kill the good vibes at Okeechobee. Overall, the line up was great. Okeechobee gave the audience at least thirty minutes breaks before the next act came up. They also planned the set times well.

Okeechobee was the time to explore musical genres. I definitely heard a my variety of music, from Future, to Lotus, to Lettuce, to Daryl Hall and John Oats. In the EDM section of Okeechobee I was especially impressed with Kill the Noise and Gramatik. Kill the Noise’s set time was moved to another day, but he definitely tore it down with some heavy bass and high energy trap. The overall energy at Kill the Noise was phenomenal, it felt as if everyone was head-banging at the same time. Gramatik brought the groove into EDM. His set was a mixture of electronic dance and jam band. People were jamming out to his set, which made the crowd even more fun.

Some EDM headliners were Skrillex, Bassnectar, and Odesza. Bassnectar definitely brought all the basshead fans from all over America to Okeechobee. I saw so many bass drops and flags around the festival. What was interesting about his set were his fans. There are people that are extreme, and want to wait for Lorin on the rails all day, but the majority of the crowd was united. While in the crowd, you’d meet the nicest people, just trying to dance and enjoy the moment. People were quick to judge the basshead community, but in reality it was fine.

if u have the choice to focus on 30,000 people having the time of their lives vs 2 or 3 bad apples being idiots, focus on the 30K good vibes

Skrillex is known to give a great performance, but his performance at Okeechobee was beyond great. He tore it down with some great bass drops, some hip hop, and trap. I enjoyed him so much, that I forgot I had a phone.

When I realized that Odesza was playing at Okeechobee, I wondered if they were going to play a live set or not. Indeed, Odesza played live, and there is something about Odesza playing live that hits you right in the heart. Odesza played their set with their hearts and souls. There was a moment in the set where they asked the crowd to take out a lighter or cell, and I knew that at that moment, the crowd was one. Odesza always brings the best out in people.

Overall, Okeechobee was phenomenal. It was the full package: a four-day music and art campground festival. I wonder what they are going to do to top Okeechobee Fest 2016, but for now, I thank Okeechobee for a great start to festival season 2016.

Check out some pictures.