Home Interviews Leaving Your Mark: An Exclusive Interview With Autograf 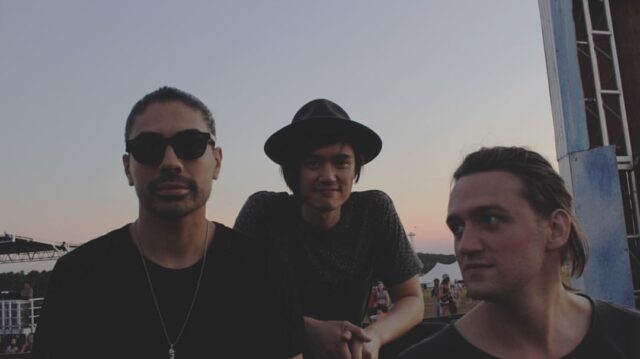 For Chicago-based trio Autograf, life is about leaving your mark on the world. Over the past three years, Jake Carpenter, Mikul Wing, and Louis Kha have collectively done that by combining their passions toward the visual and performing arts, to create dreamy tunes and an unforgettable live experience.

What began as a creative project within the Chicago community has exploded into an electronic music revolution. Just this year, Autograf has toured many parts of the world, released their debut EP Future Soup and played some of the greatest festivals around.

In between packing and rehearsing for their fall tour with Goldroom, Jake and Mikul had a moment to sit down for an exclusive interview with EDM Chicago.

How did you guys get together?

M: All three of us had previous projects before this. Louis and I had a project together and Jake had a separate project. We had known each other probably for about 3 years or so. We were working on stuff, both art and music, and one day we decided to start something new, came up with a name for it and Autograf was born.

What does Autograf mean to you guys?

M: So the whole idea behind it was what we were doing to kind of make an impact on the world essentially, what you’re leaving behind. The most literal translation of that was to leave your autograph. Meaning-wise, do what you’re passionate about and put that onto the world.

The style of your music has been described in many ways. How would you describe/define it?

M: Live electronica music is where we’re at right now with it. When we started making music initially, there wasn’t the intention of doing this live thing and it has kind of just grown into this awesome live performance now.

What other artists inspire you and your music?

M: A lot of the artists we grew up listening to, the French House movement and that stuff.

J: So, we’re equally inspired by bands as we are by DJs, since we kind of grew up with both. I was in a band in high school, Mikul was in a band in high school but we also really like French House DJs and stuff like that. So I guess for me, one of my biggest influences was an older group, The Bloody Beetroots, because they’ve kind of done a similar thing in that they’ve got a DJ background and a live band performance as well. Justice is another big one.

M: Lots of bands like The Faint and bands like that. I think I got more into electronic music by listening to them and really awesome remixes of those bands.

What is your general process for creating music? Do you start with one thing versus another, like vocals?

M: It’s been different for every song.

J: A lot of the times we start with a vocal, which is kind of backwards since it seems like most people will write songs and send them out to different vocalists to see what they make but we like to approach our originals the same way we approach our remixes, starting with a vocal. Like with Alesso’s remix, I don’t even think we imported any of the other stems. It was just the vocal and we just wrote a song around it. The other way, if you start off with a song, you don’t leave room for a vocalist to sing and if you already have the vocal, you already know your boundaries. It’s like being able to color within the lines. It really helps structure the song.

M: He was in New York when we wrote “Metaphysical” (ft. Janelle Kroll) and met up with her. They were just in the studio and recorded those vocals, like the rough take of the vocals.

J: Yeah, we were just meeting up for coffee because I was flying out later that night and were just thinking “hey, maybe we’ll work on a song together in the future” but she was just like “hey, how about we just go over to my apartment and record something?” I was just dragging all my luggage and we knocked it out.

The connection between music and art is a huge thing for you guys. What experience do you each have in art before Autograf?

M: I guess how I got into DJing is, I had a gallery in Chicago and I used to throw parties in the basement. We had a lot of DJs coming through and they taught me how to DJ essentially.

J: I went to art school for sculpture. I used to make robots and stuff. That’s how I met Mikul and Louis actually. I had this robot and at the time, I was a contractor for the Department of Defense, I was a welder making a bunch of crazy stuff. I was just making music at night to relax and put it up online. Mikul and Louis heard my mixtape and they were throwing a show at Angels & Kings. They booked me for my first ever show but the condition was that I had to bring the robot.

Is this the 8-foot tall robot I’ve heard about?

M: We were like “what is this guy doing? He’s DJing with robots, an iMac” but I guess our setup now is huge too.

Where do you guys see the art and music connection heading?

M: Right now, with every art or music piece we do, we try to do a corresponding piece. The last song we put out was “Don’t Worry” so we’ve recently been working on a Don’t Worry art series so like different street arts, different phrases like “don’t worry, live life” or “don’t worry, eat ice cream.” Moving forward the idea is everything has two sides to it, an art component and a music component.

You guys stand out in the electronic music industry – you make your own instruments and stage installments, etc.

M: When you walked in, he (Jake) built those. Those bases are plumbing pipe that he welded tips onto. We design our stage plots, design everything up there. We’ve never hired anyone, it’s always been what we’ve felt would be cool then attempting our best to build it.

Have you found that as an advantage in the industry?

J: It’s an advantage in terms of being a memorable act to watch. It is a disadvantage in that a lot of time stages can’t accommodate what we show up with. Or it’s just like “ok guys, you’ve got five minutes” and we’re just supposed to move a whole drum set, two racks, lights…

M: Especially festivals that have these elaborate stage set-ups and just a DJ booth and LED wall, and you’ve got to find a way to set up in the front of it or the sides of it.

J: We’ve performed in some pretty unique situations. I remember we were in Seoul, Korea and the DJ booth was like that wide and I had a marimba with, a mini vibraphone with me. I was supposed to play that and we kicked some people off of a cocktail table and threw it up on stage.

M: At Shambala, we were separated actually. The DJ booth was in the middle. Everything at Shambala, which is a really cool festival, is permanently built there year-round so they don’t tear anything down. Nothing can be moved but there are these two little pods in front of the DJ booth, probably eight or ten feet between them, so we set up on those for our live set ups.

What are some of your favorite stage installments you’ve had besides the robot?

M: We did this factory Warhol-themed party and did this eight-foot tall, 500 pound soup can, a cigarette that shot smoke out the front of it, Brillo boxes, lots of pop art. At the time we were DJing so we had the DJ booth kind of in the middle of the room, Boiler Room style, and all these art installations around it.

You released Future Soup this year. Will you be releasing more EPs?

J: We have practically a full album written but I think we’re going to break it up into singles and EPs. I think it’s every artist’s dream to make an album but it’s not exactly feasible anymore. I mean it definitely is but you have to take a lot of time off. Nowadays, with how ADD everybody is, you can’t just skip out for six months.

M: You used to release an album once a year, tour off that album then go back in the studio to write another album…Now, it’s not really the way the music industry is working.

J: Now, you have to make music on the plane, on the bus, in the bathroom. You’ve just got to make music whenever, however you can and put it out when it’s done.

What’s the story behind “Don’t Worry?”

M: It’s just the idea to inspire people, like the idea of Autograf, to take their passions and go out there and do it. So “Don’t Worry” is just kind of a reminder of that idea of looking at what’s going on in the world and not to worry about what’s around you. Instead, focus on the things you’re passionate about.

J: It just seems like there are a lot of focus on things that are negative, that people can’t worry about. When we wrote that song, I believe the fashionable fear was ISIS. It was cool to be afraid of ISIS and ISIS is about as dangerous as choking on a chicken nugget. That’s about your odds of getting killed by a terrorist in ISIS. It’s ridiculous, the amount of media coverage and people’s actual perceived fear of this imaginary thing and so it’s kind of coming from that point. We just wanted to bring a more positive light like, “don’t worry.”

Aside from your tour with Goldroom, what else can your fans be looking forward to?

M: We’ll hopefully put out some songs that are done during the tour.

J: We’re trying to get some art projects in. It’s been a constant struggle since we’ve started Autograf, getting back into doing the visual art stuff. I don’t think any of us expected the music to take off like it did.