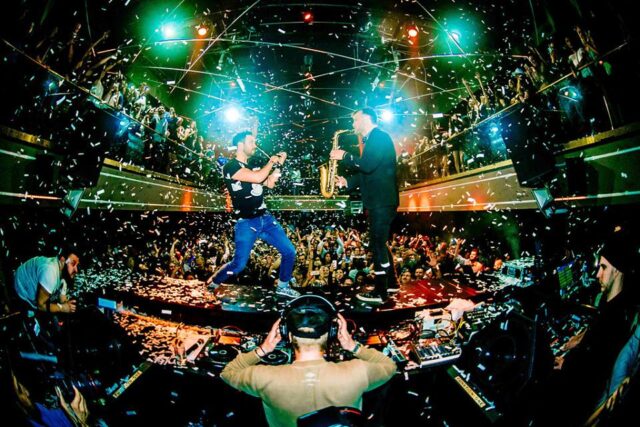 The eclectic and dynamic producer and DJ Klingande is more than capable of providing a phenomenal night to electronic lovers in Chicago. Having seen him perform previously at Tomorrowworld, I was excited to see how the French artist’s sound translated to a club setting at Prysm Nightclub. Cédric Steinmyller, or Klingande, experiments with melodic house through his use of euphoric mixing and pulsating saxophone and violin instruments.

With classics like “Jubel”, and newer tracks like “Somewhere New”, “Losing U”, and (my personal favorite) “RIVA (Restart the Game)”, Klingande has time and time again proven his ability to be a pioneer in the tropical/deep house game. His infusion of smooth tropical sounds into nothing short of bass-heavy, club-popping, and techno-loaded beats is a treat within itself.

Klingande’s first performance at Prysm nightclub was marked by a joyous and animated crowd, who pretty much did not stop moving throughout the entire set. I think what makes Klingande so unique is his ability to not only make people dance, but provide blissful moments of happiness in the crowd. I saw it all throughout the night – smiling faces filled with entrancing moments of vocal or lyrical recognition as the classics played. His experimentation with tracks from Flume, who don’t quite resemble classic tropical house sounds, as well as his delving into some techno towards the end of the night, demonstrate his ability to make sounds sync together. Not to mention the incredible ability of the saxophonist and violinist to perform intense solos that absolutely rocked the crowd and brought the level to an even higher place.

Klingande’s name is inspired by the Swedish klinga, meaning “to chime” or “to sound”. His choice for a name was incredibly spot on – as his music fits a certain phonic aesthetic of blissful vocals fueled by high-energy and dance worthy beats. His producing talent, along with his live mixing and performance with various instruments truly marks a distinct sound in the electronic music, and a helluva night for Chicago’s Prysm Nightclub attendees.

I sat down with Cedric before his set to chat about his return to Chicago, future plans, and inspirations.

Thanks so much for being with us here tonight Cedric! This is definitely not your first time in Chicago as you’ve been here previously in November at The Mid – how has your experience in Chicago been so far?

Cedric: I never stayed long here, so I can’t really say because I haven’t had time to explore the city really. There was a show I did here a while back and it was a very good crowd – very educated as well. So I definitely really enjoy the crowd here in Chicago when I’ve played.

Awesome – so you have Miami Music Week coming up. I know you’re playing the Klingande Playground again this year on Sunday, March 26th. Can you talk a little bit about the concept of that and how it came to be?

Yeah it was just formulated as an event to, once a year, bring all different DJ friends together to play in one place. I also really try to bring people that are close in terms of the music they make. I try to ensure the style is like mine. It’s not so much a tropical or deep house sound, I like to call it more melodic house, or melodic music. So artists like Autograf, Jonas Blue, etc. It’s nothing special, it’s just about being at a cool place with cool people and good music.

You have a lot coming up this year. You just recently released \”RIVA (Restart the Game)\” and \”Losing U\”, and some collaborations as well. Can you talk a little bit about your upcoming work?

Absolutely – so I stopped touring earlier this year around January in order to make music. I really want to do an album, but I also want to stick to what I say and actually complete it. So right now, I’ve had to release song by song and see what’s happening. You definitely need a massive song to launch an album. So yeah –  I’m working on a lot of music and different genres, and now I have to finish them yet. There are some collabs in the works, so we will see. I’m hoping to release my next single in a month, but it’s still going through some finishing touches.

Definitely – excited to hear what’s coming up! You’ve also played some big festivals, such as Tomorrowland, Tomorrowworld, etc. Can you talk about your festival experience and the club/more intimate venue experience and how those differ?

I like both to be honest! In festivals, I feel a little less nervous because you always know it’s going to be packed. With clubs, not so much. Sometimes with clubs it’s not as full of people, so you never really know. This is definitely important because you know that it’s a better time when it is packed. This is one of the biggest differences between the two. I also like the US a lot because there are a lot of venues, not just clubs, so I am able to have the setup needed for my live show. I really love venues like that because it’s easier and festivals are great as well because you can really express yourself in your set to a wide group of people. And clubs, like tonight, are fun as well. Some of the best parties I’ve ever had were at small, intimate clubs.

That’s awesome. It’s exciting to see that you are so open to so many different experiences. Prysm will definitely be on the smaller side of the spectrum in terms of size. I’m really llooking forward to it! Thanks so much again Cedric!