Home Interviews Jauz Pioneers Future of House, ”I was just dicking around” 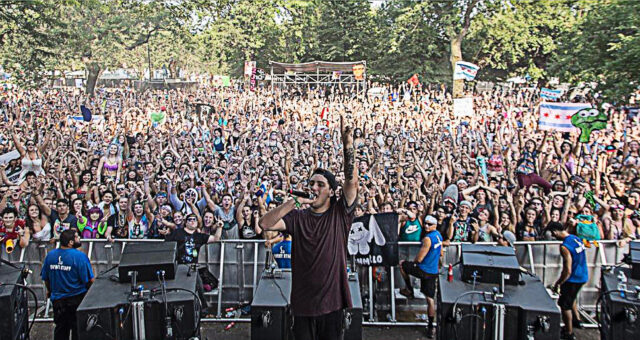 Jauz told us to \’Feel the Volume\’ about a year ago and by now I think more than most have heard. Sam Vogel is a 22-year-old producer based in LA that took the electronic world by storm as he melded deep house and dubstep into one gnarly genre. Since the release of his first hit track, Vogel has traveled around the country acquiring sharks for his squad of deeper lovers that always seems to be growing. After Vogel melted North Coast into a puddle of bass, we had no choice but to sit down and ask him to describe the experience of rising to fame in such a rapid manner.

It’s pretty weird, man. It definitely doesn’t feel normal but at the same time it kind of does. This is my daily life [now] like any day that I’m not out playing shows, I’m in my room making music, working as hard as I can to keep everything going. Today I got to bring a bunch of my cousins, who never do any of this shit, and they’re all freaking out about it, like ‘this is so crazy’ but it’s really not that crazy, I do this every day. It’s exactly what I hoped I\’d be doing with my life but I never could have imagined that it actually would happen.

Jauz\’s passionate fans grew in numbers and became known as the Sharksquad but at it\’s conception, the name \”Jauz\” had nothing to do with sharks or movies related to them.

In the beginning the name Jauz had no relevance to the movies or to the shark or anything. It was a slang term that was used at my high school which I thought was stupid as fuck. So I kind of reappointed it as a joke but then as the brand picked up steam, people would always say, ‘Oh Jauz like the shark’ and then my manager and I said, ‘We should probably do something with this.’ Then I started throwing out sharksquad here and there, then I started using the shark emblem on Facebook and that caught on super strong. It was all organic branding, the only thing I had when we started was the logo and ‘Music has no Boundaries.’

Throughout his meteoric rise, he collaborated with the likes of Skrillex, Dillon Francis, Borgore, Pegborad Nerds and more. He revealed to us that there are more collabs to come with artists that are simply pushing the envelope in the house game.

If you asked me that question two months ago, I would have said Eptic and [now] were actually working on a track together. Habstrakt is another one and we have a track or two in the works. I’m working with a lot of cool people right now, I’m working with this guy named JVST SAY YES, he\’s one of my favorite house producers right now, he’s just getting off the ground but his productions are so top notch like when I work with him, I learn a lot. Another guy would be JoyRyde, which is a name I’m sure your familiar with at this point and he\’s been murdering the house game, like absolutely destroying it.  It’s really an awesome experience for me to get to be on the same level as those guys.

His fusion of heavy bass with deep dancey vibes inspired artists such as Dubloadz, who admired Vogel for bridging the gap between the two contrasting genres.

The first thing I want to say is Dave (Dubloadz) is a good fucking homie like before I came up at all I loved his music. I come from dubstep, dubstep is my stomping grounds and I love all of his work and when he came to me saying that I’m killing it, I was like ‘Woah, man that’s fucking weird.’ But it’s been really cool to see artists like him break out of their boundaries and try different shit and I really respect Dave for that.

The second thing I want to say is that, I don’t think I really did anything all that different. I think its people’s perception of what I’m doing that makes it different. Like I said I came from dubstep, so to me ‘Feel the Volume’ or any of the housey tracks I made, came after I heard stuff like Chris Lorenzo, AC Slater, Cause & Affect, Jack Beats which have been around forever doing kind of what I do, but what I heard from them that really spoke to me was like these guys kind of use dubsteppy sounds but make it groovy, make it fun, make it dancey and I was like, ‘I want to do that, I want to try to do that. I want to try bringing my influence of heavy ass music and bring it to a more bouncier, dancier vibe. I would say the reason people say I’m doing this so differently is because I took two these that are so contrasting, for example deep house and dubstep, and smashed them together. I was really just dicking around and having fun. ‘Feel the Volume’ almost came together as a joke. Then I listened back to it and was like wait, ‘This thing may actually have some legs, this might be a sick track.’ We put it out for free and said ‘Eh let’s see what happens.’ It’s not like I was sitting there like, ‘I’m creating a new genre, I’m going to do something different than everybody else’ and I think that’s where artists falter.

There are the artists that say, ‘This guy did this that worked, so I’m going to copy him’ and that’ll never work. You’ll never be bigger than that artist and I personally was a victim to that for years. On the other side there are the artists who try so hard to do something different that they’re not actually doing what they should be doing, and that’s my one piece of advice for artists, It doesn’t matter what the fuck you’re making as long as it’s coming from you like from your real self on the inside and you’re literally letting yourself come out on Ableton or whatever you use, people will resonate with it. And that’s what I tried to do.

The mission behind Vogel\’s project is the crumbling of musical boundaries and encourages all to explore all different kinds of music.  If Jauz is truly successful there will be some changes to the electronic scene.

The one thing that I would change is the whole mission behind Jauz which is ‘Music has no Boundaries’, like trying to help everyone open up to the idea of being able to like more than one thing, you don’t have to just like Big Room House, you don’t have to just like Deep House or Future House or just Dubstep. I grew up in the metal scene and I would listen to the heaviest most disgusting shit and freak my parents out. And I would also listen to the much lighter, melodic side because I’m a musician and that spoke to me as well. So when I came to electronic music, I was like there is dubstep and melodic shit and so many [genres]. Electronic music is such an open platform that like to box yourself in and do one thing is so stupid to me, don’t get me wrong there there’s ton of people who stick to one sound and kill it and get huge, more power to them but that’s not why I got into this. I didn’t get into this to be a pop star, I didn’t get into this to be famous, and I didn’t get into this to make a lot of money. I got into it because I fucking love music and I want to be successful with music for the rest of my life. If I can have a mission or message behind it that I can vocalize to people then I feel like I’ve done my job.

Recently, Vogel began the Deeper Love Tour in which he is assembling the Sharksquad in a myriad of cities across the world until New Years. He is also putting in much work into his upcoming EP being released on Mad Decent, it\’s supposed to be epic.

The future for Jauz is pretty bright, I’m finishing up my Mad Decent EP right now which is going to be really fucking epic. I have literally been working nonstop to make it as perfect as I possibly can which is a joke in itself because nothing is going to be perfect but I really wanted my first EP to be something I can put out and be confident in the fact that this is me, this is what I love, these are all the different kinds of music I like to make, that I like to listen to, that I like to play and if you like it, great, if you don’t, that’s fine too. Either way this is fucking me, this is my shit. It’s like an autobiography.

This knowledgeable pioneer of music has initated something of monstrous proportions, one could say the volume has definitely been felt.