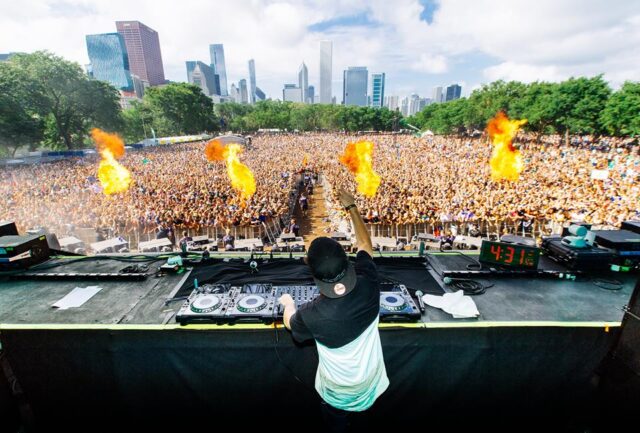 As technology has come to grow, more and more \”DJ\’s\” find themselves becoming heavily reliant on plans that are pre-planned, and, unfortunately in some cases, pre-recorded. This reliance is for a number of factors such as lighting and/or pyrotechnics, convenience, or just outright laziness. For JAUZ, it was more on the convenience side as he says when he took to Facebook to describe the nightmare that happened just prior to going on stage at Lollapalooza.

\”Lollapalooza was an incredibly important show for me,\” JAUZ writes, \”we\’re rushing out the door of my green room to get to the stage. I grabbed my USBs, … and bolted out the door, and didn\’t realize until I plugged them in on stage that … I COMPLETELY FORGOT TO TRANSFER MY LOLLA SET TO EITHER OF MY USBS STICKS\”. JAUZ continues to write that he didn\’t even have a moment to spare as he was rapidly scanning through the multitude of tracks on his USB in order to not miss a beat. The post continues with JAUZ saying, \”just because someone \”plans\” out their set doesn\’t mean they can\’t DJ on the fly, open format, ETC. Most of the time even if I have a \”planned out\” set I\’ll go off-track from it, but especially when we only have 60 minutes to fit in every single awesome track we want to play having a plan of action beforehand can be invaluable\”.

Now, as you could imagine, this type of confession comes with immediate backlash. Prominent DJ and producer Laidback Luke took to Twitter to say that having a pre-planned set isn\’t \”the way to perform\”. JAUZ responded to LL by saying \”for a 60 minute set my \”pre planned set\” is 80-95 songs lol so u never get thru all of em. Always bouncing to what feels right\”. In the end, it\’s a pretty funny story to hear that a DJ could get so wrapped up in the day that he ends up forgetting his tracks for his set, but JAUZ\’s story sparked a nice conversation as to why it isn\’t okay to pre-record a set.

While most people now will say that they could care less about the act of DJing, and more about the music, it\’s almost insulting to those who have mastered the technique of DJing over the years, and have been able to put on memorable shows by playing music and mixing off the cuff. In the end, those who choose to take the shortcuts will continue to do what they do, but it is the ones who work hard that shine through.

With that said, relive JAUZ\’s full Lollapalooza set in video form below: