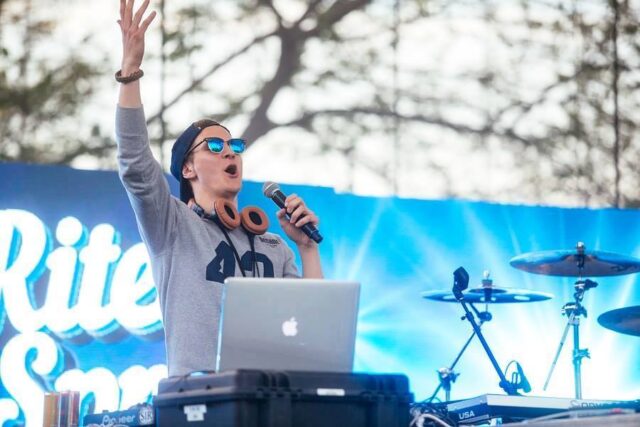 Earlier this Fall, Norwegian DJ/producer Matoma graced many cities throughout North America with his Party At Your Place! tour. As the genre classified as \”tropical house\” continues to grow, Tom Lagergren grows with it and brings a whole new sound to the scene.

Before he hit the stage in Urbana, Illinois on September 30th for a sold out show, he took a moment to share some details about himself with EDM Chicago.

How has your summer been?

Do you have a favorite so far?

My favorite country is Australia. It’s so beautiful, the air there is really clean and the people are really nice. The nature is also really nice.

Do you have a favorite festival or show from this year?

So far in my career, it’s been Coachella. I brought down Ja Rule, Akon, Sean Paul…it was a big moment. It was such a blast.

You’ve had a few sold out shows for your fall tour already. How does that feel?

It feels amazing to kick off the tour like that. Tonight is sold out and tomorrow it’s going to be sold out. It’s really really fun and means a lot to me. I could not have done this without people coming out to my shows.

We’ve also spent like 10 months on designing the stage and production. It’s so nice to be out and spreading the love.

Tell me a little about yourself. How did you get into music? Where did it all begin?

I started playing the piano at when I was 7 years old and then when I was 16, I got tired of playing just classical piano so I bought myself a computer. I started producing when I was 16 and from there, I went to the army and applied for music school. I went to university and I took a Bachelor’s Degree in Music Production and Technology.

Your music is often described as “tropical house.” What do you love about that particular sound?

I really don’t look at my music as tropical house. Some songs I have are more tropical than other but some sogns are also hip-hop, urban and R&B flavored. It’s more about the sounds of my songs that make it tropical. For me, it’s more new hip-hop, new disco…

You’ve done remixes for different hip-hop artists and indie artists like Tegan & Sara. Do you see yourself dabbling into other genres in the future?

You know how I found out about Tegan & Sara? I loved One Tree Hill when I was in middle school and they had many songs on those soundtracks.

I have a new song coming out in October. It’s all about evolving and developing.

Who are a few of your favorite artist currently?

Hakuna Matoma continues to grow. How did you get the idea to do the continuously evolving album?

Just by my background with Soundcloud and I really want my music to be current. I have a fanbase that follows and subscribes to the album.

What’s your favorite track off the album so far?

There’s so many but I have to say “False Alarm.”

Any upcoming plans we can look forward to?

I have my new single coming out in October and will continue to evolve and develop music as I tour this fall.