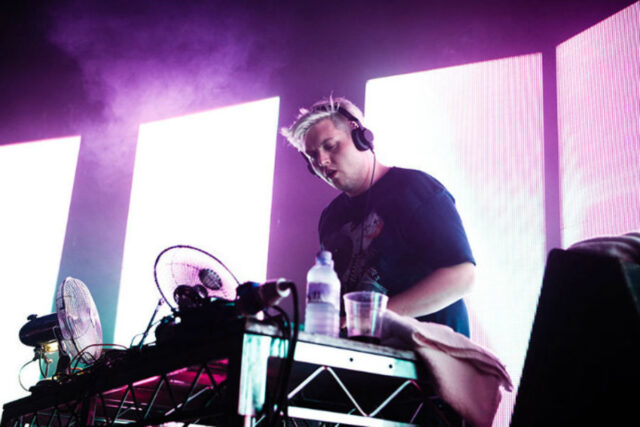 Ever since he popped up on the scene in 2008, Joshua Steele, otherwise known as Flux Pavilion, has taken the EDM industry by storm. Releasing pulsating tunes like \”Bass Cannon\” and \”I Can\’t Stop\” that have cumulatively received hundreds of million streams online, Flux has continuously brought unique tunes to his multitudes of fans, and has created his own record label and a full-fledged album in the process. At Flux\’s annual Spring Awakening set in Chicago, we were able to sit down to him to discuss how\’s been doing, what producers he\’s got his eye on, a possible new alias and the artist looking past the viral hits. Read below:

Yo Flux! Thanks for taking the time to sit down with us. How are you doing and how does it feel to be back in Chicago?

FP: I’m pretty good, but I’ve been quite ill recently, which is probably not that interesting. *laughs* I think I’ve done Spring Awakening every year, like since I’ve started touring, and one of my first years of touring I came here. The biggest first show I ever did was Congress here, and the biggest proper festival was Spring Awakening, and I’ve been coming here every year. Chicago, for me, is important because it holds one of my first experiences of being an artist and coming out and touring and playing for loads of people. Really fond place in my heart, fond memories.

FP: Quite a lot of new music. Probably got around 6 new songs of my own, I reckon. I’ve been kinda writing so much since the album, and everyone on Circus, something kind of happened last year, and we kind of kicked ourselves in the ass and we’ve all just written loads of new music. I’ve got new music from Cookie, and FuntCase, and Doctor P, and loads of new guys signed as well. About half my set is brand new music that not many other people have. I know there’s a guy called Wheathin, and we’ve just done a track together, and no one’s heard it yet, so I think he’s going to come out when I play if he’s about, and we’re going to play it tonight.

FP: How do you pronounce Wheathin?

FP: Haha, we’ve never actually met so his name just looks kind of strange, and it could be pronounced like so many different ways. I just don’t want to announce him, and be like, “We-ah-tin!” *laughs*

So speaking of music, who are you keeping your eye on for 2016? The EDM wave seems to be shifting very heavily lately, and you have your own label, Circus Records, so I’m curious to hear who are some of your favorite up-and-coming artists?

FP: It would have to be the guys that we sign, really. There is this guy called Siran, who we just put an EP of his out, and he’s just handed in his next EP, and he’s making 100 BPM, 110, but it’s not really moombahton, it’s not really anything that’s been around. You hear it, and it’s recognizable as electronic music, but it has all these ideas and grooves in there that I’ve never really heard before. So, I’m really fascinated by his stuff. There are these house guys called, they do a varied range of stuff, but they’re called Standard and Push. Again, the people we sign are people that are kind of thinking outside of the box, and making weird stuff that I’ve never heard before. Those two are super fun, and there’s this guy named Cormak, and he did a bootleg of one of my tracks and I found it on SoundCloud, and since then, we’ve been talking and he’s making really killer music.

Awesome. So you’ve definitely proven yourself as an artist, and have shown a lot of versatility within your production styles and the like. So what’s it like writing your own vocals, singing and the production behind that?

FP: I think a general inclination I just have, or a feeling inside, and I just don’t want to do some shit that someone’s already done. I’ve been like that since I’ve been a kid, really. I do lean towards sounds, and I get quite inspired by stuff that if I’m working on something that sounds just like a track, even if it feels like it’s going to be really popular, I’ll just delete it. Because, I’m not really in it for having music that’s really popular, I’m not really in it to make loads of money and stuff like that. That is a byproduct that I’ll gladly accept, but it’s just trying to write music and write something that I’d call different, and explore the realms of electronic music and hopefully hit on something that no one’s hit on before. For me, it’s the discovery and the forward thinking. It’s not so much about the end result, it’s about the sit-down, creating something different, and let’s hit it with a hammer. That is why I get up in the morning.

With many artists testing different genres, could you ever see yourself breaking off into something totally different?

FP: Yeah, but it wouldn’t be Flux Pavilion. I think that’s the thing, I’m working on loads of music all the time. When I was working on Tesla, I kind of created a boundary of what Flux Pavilion is, and I think I’m going to try to stick to that, because there have been a few things that I’ve released in the past that have just been quite out there, for someone who has listened to my first track and listened to a track like “Freeway”. It’s so far removed from other stuff that I’ve done, and sometimes, I think that it’d be best served if I took those ideas and I didn’t even try to make them anything like Flux Pavilion. I just took it in a completely different direction. “So like a new alias?” Well, yeah. There’s always a possibility of something like that happening, but Flux Pavilion is still the reason I love to write the most so that’s still my focus because that’s what I love to do. But if there ever comes a point where I want to start writing loads of ambient stuff, I’m not going to stop myself from doing that.

Now, with “I Can’t Stop” and “Bass Cannon”, they\’re  obviously well-known international festival smashers. It’s definitely a song most people think of when they think of fun festival music, so what is it like having your name engraved into the EDM stone, if you will?

FP: Quite strange, and also, it comes with the desire to not just be that, I suppose. I think that’s where a lot of that experimentation sort of comes in, because like “I Can’t Stop” wasn’t written as a hit, it wasn’t like “this is it, I’ve made my hit now!”, it was just really cool. It was on the C-side of a 4 track EP, so when I released it, it wasn’t like “this is gonna be the one”. I just loved the song, and like with everyone of my songs, I love it and I released it. I guess the short answer is, I don’t think about that. Because, when you start thinking about where you’ve got to, you start considering that your journey is coming to an end, and I think creatively, you should never think like that. You should never think about destination, like where you want to get to, you should think about “I wanna make stuff”, and you make something, and it’s cool, and you love it and then you make something else. And then you keep doing that until you don’t feel like making anything anymore.

Alright, so we had Tesla album last year, you just released a new EP with Doctor P called “Party Drink Smoke”, so what does Flux have in store for the rest of 2016?