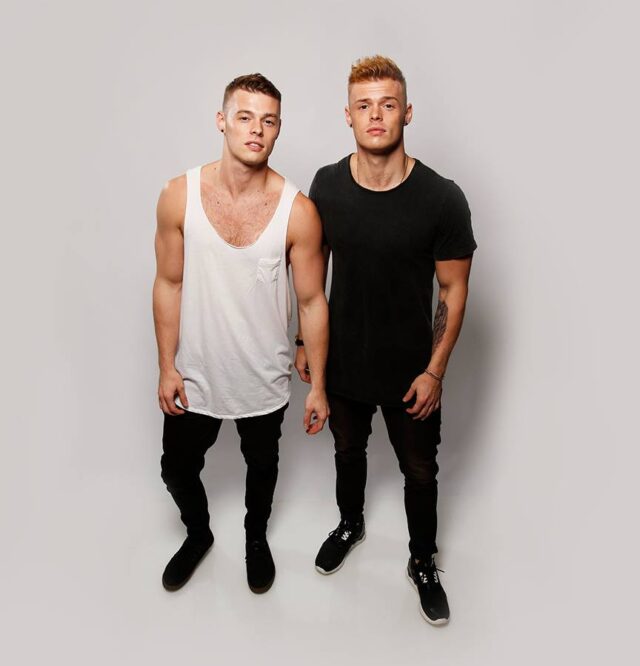 I was blessed with the luxury of sitting down and talking to Adrian (Cooks) and Dorian (Milk) who go by their stage name of Milk N Cooks. The twin-brother duo is based out of Chicago, and I\’ll be the first to tell you that besides making fantastic tracks, these boys are hilarious. The self-proclaimed \”post-bro\” styled DJ\’s just released the Halloween edition of their monthly podcast titled \”Tasty Beats Vol. 9, A Freaky Deaky Halloween.\” On top of that, the boys will be playing React\’s Freaky Deaky Music Festival taking place October 30th-November 1st. Milk N Cooks are scheduled to play at 3pm on the 30th at the Shrine stage. Check the interview below for some shits and giggles, and to check up on what Milk N Cooks have been doing recently and where they\’re headed.

Where do you find inspiration for your music?

Adrian: It\’s pretty crazy because literally any sound can generate a full song in my head…like I can hear a printer shooting out some shit that someone is printing and it\’ll start a whole melody in my head and then if I keep imagining shit I can literally make a whole song in my head from that one random sound…everything seems to have a \”pitch\” to me and I don\’t know, the almighty creator just blessed me with the ability to build melodies and songs out of anything – pretty sick shit eh?

Dorian: Anywhere really, and almost all dope musicians say that because it is true. When you have been blessed by the universe with a creatively wired brain….anything and everything will cause songs to just start playing in your head. I almost never get inspired \”directly from listening to another artist\” but more like imagining funny/emotional scenarios in life and then the theme song for that circumstance will start playing in my head. Like as if I was el padrino Pablo Escobar in Narcos…just start imagining and then a Columbian/cocaine induced little beat starts playing in my head [laughs].

What is something about your music making process that your fans don\’t know about?

Adrian: It\’s brutal. There is a meme I saw once that describes it well, something like, \”this is dope, this is crazy, this sucks, you suck, damn this song is dope\”… it\’s cool because I\’ve been doing it so much I know that if I liked something at one time, and now I hate it, it\’s probably still dope and I should finish it…I\’ve just listened to it too much.

Dorian: I guess that we literally free ball it. Some tracks are made totally by Cooks (he started producing first), some tracks are mostly done by Milk and some tracks we go back and forth…rarely are we ever like sitting next to each other going at it because we would probably just get in a verbal argument 10 seconds in [laughs].

Tell me about Tasty Beats – A Freaky Deaky Halloween.

Dorian: Harry potter intro, cause WE ARE MARSHALL…nah just kidding, good movie though. We wish we were wizards, who the fuck doesn\’t? It\’s in honor and preparation for Freaky Deaky Music Festival as well as our birthday and Halloween is just the shit. We\’re scorpios, 10/29 birthday, we play Freaky Deaky 10/30 and then hallopenis is 10/31 – does not get much frattier than that Mol.

Adrian: It\’s the Halloween edition of our monthly podcast, and it\’s better and more creative than any DJ podcast currently out there…and I wish Harry Potter was real.

I\’m sure you get this enough but…where did the name Milk N Cooks come from?

Dorian: Was abducted by aliens, got my rectum pumped with milk, my bro got his pooper stuffed with cookies. Then this disco band in the 70\’s actually owned the legal rights to Milk N Cookies so we dropped the I, and the E, and started cookin\’ stuff in the Kitchin as Milk N Cooks – ja fell?

Adrian: This homeless man was shittin\’ himself all over the sidewalk this one time when we were in San Fransisco.

Tell me about your favorite show you played. What was that like?

Dorian: The season finale of Narcos. It was, the favorite show, I have ever played.

Your label Kitchin Records practically established itself as a good label within a matter of a few months, what do you see for the future of it? What do you look for in songs you release on it?

Dorian: Well first off – that is quite that humbling question, I did not realize we were good within a matter of months. However with hundreds of thousands of plays, and a track on BPM Sirius radio – maybe you are right. The future of the Kitchin is this:

Like a kitchen, you have many ingredients, and many people can cook up what they want, from cultures all over with tastes of all over…that is what we are for, no rules, no limits, electronic, hip hop, rock, shit.. country if it was dope AF. We want to help people that put their fuckin\’ soul into music, like we do. That is all – so as we go many artists will join the Milk AND the COOKS in the Kitchin. Ya dig?

Adrian: I foresee Kitchin Recs being the hub of our whole operation with Milk n Cooks and our homie DJ producer friends, themed parties around it, apparel, tours, seminars about how to get girls, songs that other labels are too scared to sign because they are \”different\”, maybe a collab with Shania Twain…that\’d be fuckin\’ sick [laughs].

What do you see for the future of Milk n Cooks?

Adrian: Work really hard to become as successful as possible and take over the world one supporter at a time. Then when we do take over the world, continue being super down to earth and open to everyone and polite and show people that that IS how you succeed, working hard and being a legit person.

Dorian: Crush a music career for 20 more years then duel run for Illinois senate with our campaign motto \”Everyone Love Everyone\”, then run for Pres and Vice Pres and save the world through music – you said it Molly, not me.

Thank you, both of you, for taking the time to talk to me about your music and your future. On top of that, thank you for making me laugh uncontrollably. Definitely make sure to catch Milk N Cooks this weekend at Freaky Deaky. This is NOT a show you want to miss. Also be on the lookout for a new single from Milk N Cooks called \”The Beach\” which will be dropping next Wednesday with an awesome music video.