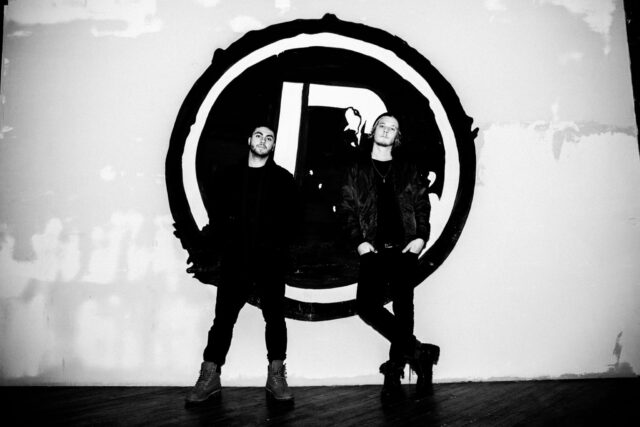 I sat down with Chicago deep/bass/future house duo Juno Moss before their show at the Segredo in Madison, Wisconsin on Thursday, June 18th. These guys are just getting started in the EDM scene, and are definitely an act to keep an eye on. They\’ve opened for 3Lau, and played at the Silent Disco at 7 P.M. on Sunday of Spring Awakening. On this night, they were opening for Dillon Francis with fellow Spring Awakening artist Antics. Check back soon for an interview with them as well!

So for our readers who might be unfamiliar, who are you guys? Tell us more about yourselves and Juno Moss.

M: Well, I’m Mike, he’s John. We started Juno Moss about a year ago. We both DJed on our own, I went by Yikes, and Johnny was Kadenza. We kinda met and just realized we shared the same styles and wanted to work together.

J: That’s what was really cool. We really liked the same music.

M Yup, and we would always get booked for the same shows, and decided to make a duo. That’s how it all started. For our sound, we really dug that future house, weird stuff.

So more Cause & Affect than Oliver Heldens.

M: Haha yeah, nothing like that. Nothing against the homie though. We strive for that weird sound, but at the same time, everyone can dig it. Pretty soon, we started producing with that sound in mind, and that’s how we got where we are today.

Where do you guys come from?

M: He’s from Berwyn, I grew up in Downers Grove.

Where did you get your name?

M: It’s a weird story. A while ago, me and my other friend were gonna make music. Not even dance music, just experimental stuff, and the name Juno Moss got brought up. We thought it was cool, but we never did anything with it. Then, when me and Johnny were brainstorming names, I brought up Juno Moss and we both really liked it. It worked out perfectly, with our names being Johnny and Mike.

So you said you go for the future house sound, but is that how you would categorize your music? I’ve heard your sets before, and there really is no genre.

J: Yeah, there really isn’t one thing we play. Personally, that’s our favorite sound, the deep sound. But any time you hear our music, especially the stuff you’re about to hear soon, there’s a lot of hybirds. Our old stuff was the same way, with house influences. We have a lot of hip-hop/rap influences as well. I don’t wanna coin the term “trap it out,” but we’ll do that when we’re producing a track or DJing sometimes. We really like to switch it up.

I saw you guys open for 3Lau at the Concord in April, as well as HeRobust on the Anita Dee Yacht a few weeks ago. Great job at both venues. What were those shows like?

M: Concord was amazing. We got booked for that the same day. We had no idea that crowd was gonna show up either. When we first started playing, there was nobody there. By the end of our set it was so packed. It was kinda surreal. Towards the end of our set, I looked at Johnny and was just like “Dude…” and he’s like “Yeah, I know!” And didn’t we trap it out at the end?

J: Haha yeah, we did. We were looking out there and wanted everyone to turn up.

Tell me about the Silent Disco at Spring Awakening. Is it any different playing to people dancing in silence instead of in front of massive speakers?

J: Personally, I loved it. We both did. They actually ran out of headphones during our set. The dude who ran it came up to us and actually told us we were killing it! It was a lot fun. I remember saying “Just because it’s a silent disco, doesn’t mean you can’t be loud!” and everyone went crazy.

M: You didn’t even tell me what you said! I heard everyone scream and you told me don’t worry about it.

Was that the biggest show you’ve played yet?

M: I think Concord was the biggest we’ve played yet. We’re opening for Dillon Francis, so tonight should be one of the biggest shows too.

Is Concord your favorite show you’ve played too?

M: Definitely. Leaving that, people told us they were their favorite set of the night.

J: Yeah, definitely the Concord. We had a lot of love on social media too. It was really motivating. Great confidence booster.

What are some venues or festivals you’d like to play at?

J: Really, the only club we haven’t spun at is Spy Bar.

M: Yeah, that’s true. And we’ve both said since the beginning that we really want to play at Spy Bar. We love that underground feel.

J: But I wanna be there when it’s a Juno Moss show.

M: Haha yeah, we should wait until we can do that.

Is there anything else you’d like our readers to know about you? For example, what are you up to outside of electronic music?

J: I’m involved with remix, and make beats as well. I’m really affiliated with the hip-hop and rap scene. I produce other stuff like that under John McLachlan.

Any advice for young producers and DJs?

J: Always get better, and surround yourself with people better than you.

M: When it feels like you’re gonna fail, don’t even listen to your conscious. Just go for it. That’s all you have to do. Go for it. Work every day, and surround yourself with people that have the same vision as you. And you’ll succeed.

So you guys are obviously just getting started with your success. What can we expect from Juno Moss in the near future?

M: A lot of releases. We haven’t released much yet, but we have so much cooking up in the kitchen. We’re our toughest critics, and we want to make sure our tracks are up to our standards. But we’ll be releasing a lot of great stuff very soon.