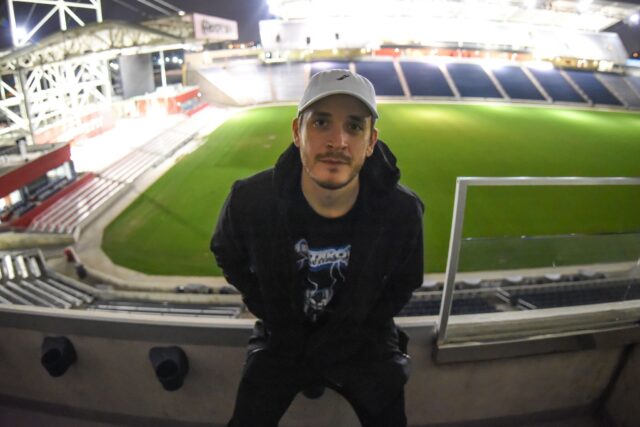 Bro Safari can really do it all.

Nick Weiller, better known by his moniker Bro Safari, is a teenage punk-rocker turned EDM producer. The family man holds over ten years of experience in the dance music scene, and in his time has managed to always stay fresh and innovative. From Evol Intent to Bro Safari, the Georgia native can really do it all.

I had the pleasure of sitting down with Nick at Freaky Deaky Music Festival to talk about his origins as well as his future.

Check out the interview below and be on the lookout for some new Bro Safari releases. And Nick, by the way, \”The Drop\” really did get me into this genre, and I do sincerely thank you for that. On the record.

You used to play in a punk band when you were a teenager. How did you get from doing that to producing trap music?

Nick: Well, a lot of time passed between the two. I was in high school and like you said, I was playing in bands. When I went off to college, my band broke up and I didn\’t have anyone to play with. Then I went to a rave and saw Diesel Boy playing a drum and bass set. It fit the mold of the punk music I liked: it was fast, aggressive and heavy. So I got into drum and bass really heavily. From there I learned how to produce, DJ and…TRAP.

Outside of electronic music what do you find yourself listening to?

Nick: Oh, nothing, I don\’t listen to music anymore. No, I\’m not kidding. I just haven\’t heard anything that\’s super exciting in a long time. I listen to Kendrick Lamar religiously and Radiohead actually, but that\’s about it. I play Call of Duty sometimes.

What kind of genre of music do you classify yourself as making?

Nick: Right now, I don\’t know. It\’s kind of like an identity crisis, if I\’m being completely honest. I feel that I have kind of run the course of the trap, moombahton, dubstep thing. I still love it and I still DJ it, I just feel like I\’m beating my head against the wall to come up with new, fresh ideas that I believe are innovative. I want to be innovative, I want to make party tracks, but I want to feel like I\’m doing something new. Right now I don\’t have a genre that I\’m subscribing to. I\’m waiting for this tour to be over so I can sit in my studio for two months uninterrupted and redefine Bro Safari and what I am trying to do with my project.

I want to do an album, and there will be electronic elements in the tracks, but I also want to pull out my guitar and sing and play drums. I just like trying new things. I want to create and let the album happen naturally.

Nick: For this year, yeah. I have three collaborations that I\’ve been working on: one with G-Buck, one with Diamond Pistols and one with Dion Timmer. Oh, and one with Dillon Francis as well. I\’ve got those four tracks that I\’m trying to put the finishing touches on. I\’ll most likely release them with the songs that I put out at the end of the year, \”Reality\” and \”Follow\”. I\’ll probably package them as an EP.

Nick: UFO!. And also UFO!. We have already started work on another album. If I look back over the last few years, my album \”Animal\” that I collaborated with UFO on was what I was the most proud of. We\’ve got about 8 demos going right now. I\’d like to get it up to 16 or 20, then narrow it down. We\’re trying to make this outside of the typical EDM realm.

You originally started out in Evol Intent. How has your career changed since you became Bro Safari?

Nick: I just really changed as a person in general. The scene has really changed dramatically; it became EDM. When I was with Evol Intent, it wasn\’t EDM, it was just drum and bass. It\’s just blown up. If you look around, there are thousands of kids at every show. It wasn\’t like this when I was with Evol Intent. Now it has money behind it, it has star power. You have DJ\’s that are making guest appearances in movies. It took off beyond anyones wildest dreams.

How do you balance touring and being a parent?

Nick: Um. I don\’t. *laughs* I\’m kidding. It\’s just something I do. It\’s not anything I have to think about. It\’s more a constant, grumpy old man life. I get home on Sunday, watch TV, go to bed, and get up at 7am to take my kids to school. Do that five days in a row, go out of town to DJ until 4am. It\’s a topsy-turvy shift over and over, but I\’m used to it. It can be a struggle, but the best way to handle it is to not be an asshole or a shitty parent.

What do you have in store for the rest of 2016, besides continuing being grumpy?

Nick: Well that\’s about it. Actually, these next two days are the last days of the tour, tonight here and tomorrow in Philly. When I get home, I am going to become less grumpy, sit in my studio, and be happy to be home in my element. I can sit in my studio for about three days at a time. That\’s the biggest struggle while being on the road. As a producer, I need that time in my studio. Knowing that I\’m going to have 2 or 3 months completely off, I\’m going to work on tons of music and figure out what I\’m going to do with myself next year.

What does this scene mean to you?

Nick: I\’ve seen a generation go through. I got into this in the late 90s. There are kids coming to the shows that weren\’t alive when I started DJing. This scene does mean a lot to me. There is this constant flow of new blood in and out of it, and somehow I have stayed relevant enough to make this into a career. So that means that people are still listening with an open mind, and that they like what I\’m doing. There\’s no way I cannot be grateful for that. I\’m just grateful for the scene, that\’s the best way to put it.

Nick, thank you so much for sitting down with me and letting me pick your brain for a while…