Home Interviews Talking Free Time, Friends and the Future: Catching Up with Borgore 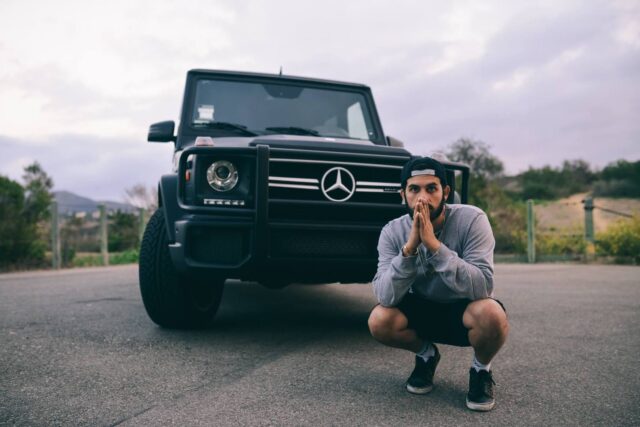 Hitting the scene at full-speed back in 2009, Asaf Borger, more commonly known as Borgore, has showed little signs of slowing down. After dropping numerous EPs, a full-length album and more singles than we can count, Borgore has catapulted himself into international recognition and has elevated his career to the next level. Founding his own record label and collaborating with some of the biggest artists in the industry, as well as Miley Cyrus and G-Eazy, the man behind the #NEWGOREORDER has much more to offer, and we got to learn a bit more of the man behind it all a few months back when he was in Chicago. Read the exclusive interview below to check out what Borgore does in his free time, his relationship with his producer friends and dealing with social media controversy.

Asaf! Thanks for taking the time to chat with us, you just wrapped up an absolutely sick set here in Chicago. What are your thoughts on the weather here in Chicago?

Borgore: Dude, it was hot as tits! Honestly, I’m from Los Angeles, and originally from Isreal, I’m used to hot weather – it was hot. Like, it was HOT. I think I got a little bit of color today though so.

In all seriousness, how was the crowd and the energy at Spring Awakening?

Borgore: Chicago always has a great energy. It doesn’t matter where I’m playing, I could be playing in Antartica now, and there will be something with a fucking Chicago flag, and they’re repping dude! Like this is one of the headquarters of not even just EDM, but I think bass. They fuck with bass here.

Dope man, so if I understand correctly, you just dropped a brand new single called “Hundreds”, and the music video and single is getting posted everywhere. What was the inspiration for that song, and how did the creative process come to be?

Borgore: I just rap about my life, always. It’s superficial, but it’s actually really deep if you really try to listen to what I’m saying. That’s the inspiration, my life. And I don’t know dude, I just wanted to rap, and then I felt like putting a big ass drop on it, kinda standard.

Borgore: Haha, that’s actually a lie. I did it in the video, but I’m not good at beer pong at all. *laughs* Actually, it depends on what day it is. Like, beer pong is such a mental game. It’s like golf. You have to concentrate, if I concentrate, I get it. Also when I’m not concentrating, I get it.

… so what are some things Borgore does when he’s out partying or just in his free time?

Borgore: Depends on the situation, but, I like to listen to other people play music. I like to learn. You listen to other people, you listen to how they mix, you listen to the songs they’re playing, it’s important. I’m not even just talking about big DJs, even I’ve been to some house parties where some dude was mixing on his fucking laptop with some bullshit mixing program, and it’s just the sickest, gnarliest tunes I’ve never heard in my life! I like to just chill, and when I party, I obviously like to listen to music. Obviously I wouldn’t say no to some hot chicks, and just fucking around with friends, playing Counter Strike man haha, I don’t know. Having good times, just chilling, honestly.

So, speaking of music, the majority of your tunes are considered to be dubstep, but many people say that the Dubstep trend is losing its steam, what would you have to say to that?

Borgore: It’s not about the genre, it’s about the music! It’s about specific songs, and if you have a good song, you have a good song. You can say whatever you want about dubstep, but if there’s a big Dubstep record, it’s just big. I think genres don’t matter anymore. Who the fuck cares about a genre? But in general, and that was my humble opinion and that’s how I feel, I feel like dubstep is making a huge comeback, because I feel like people are tired of “Ok, I listened to your set, and I listened to your set, and it’s the same fucking set!” These guys are playing the same fucking tracks! Like, yo play The Hum one more time. Play it! Like, fucking bring it. And you know haha, I’m talking shit, but I’ll play it when I need it, whenever the crowd is “The Hum” crowd. But I’m trying to get out of it myself, I’m trying to play some shit no one else plays.

Well, speaking of Dubstep, you have friends like Getter, Ookay and many more, are you going to continue to collaborate with them?

Borgore: Yeah, we’ve collabed a shit ton, but you know what, it’s important for us to stay real friends, and real friends are not always about work. And making music is work! So, we never want to make each other feel like we’re only there to work. You feel me? Whenever I see Tanner (Getter), or when I see Abe (Ookay), we want to play video games and go see movies and go to Dave and Buster’s, we want to dumb shit. We don’t necessarily want to sit down and work, I’ve been working all day. Those are my real-life friends, you know.

Not only do people talk about the Dubstep trend, but they also look at your social media feeds and like to stir some controversy, what do you have to say to those that constantly try to start something?

Borgore: Keep on talking shit. Talk as much shit as you want. Because every time you talk shit, I get so many new followers. Thank god, thank you all, god bless you. Thank you all for hating me, you know? Basically, if no one’s talking shit, that means you don’t matter. If like a fucking six-year-old comes over here right now and says, “You’re ugly”, do I care? Really, I don’t care. But if like Gigi Hadid came by and said “I’m ugly”, I’d be pissed, but I’d be like fuck I’m ugly *laughs*. So, when everyone cares about my opinion so much, it means that I matter, it means that I mean something. So thank you guys, but in general, I think the people are misreading me. The people think that I’m always controversial, and I’m super chill, and all it takes is like 10 minutes to sit down with me to realize that everything I say is in good spirit, even if you translate in the wrong way.

So you’re known for the Buygore pool parties, you just dropped Hundreds but it’s been two years since we’ve seen an album for you, what can we expect in the new material from Borgore?

Borgore: I’m working on so much different stuff right now. I’ve decided that in 2016, I’m going to focus on the music that makes me happy and not about the music that will make me play mainstages. I’m tired of feeling like I’m not doing shit for myself, and I came to the point where honestly I’m making enough money, I’m living my life. And now I want to tell my story, and this is why this year I’ve only released only like two big singles, “Blast Ya” and “Hundreds”, and they’re both dubstep. They’re super heavy fucking bangers, and that’s what I feel right now. I feel like playing bangers.

Follow Borgore on all of his social media profiles: