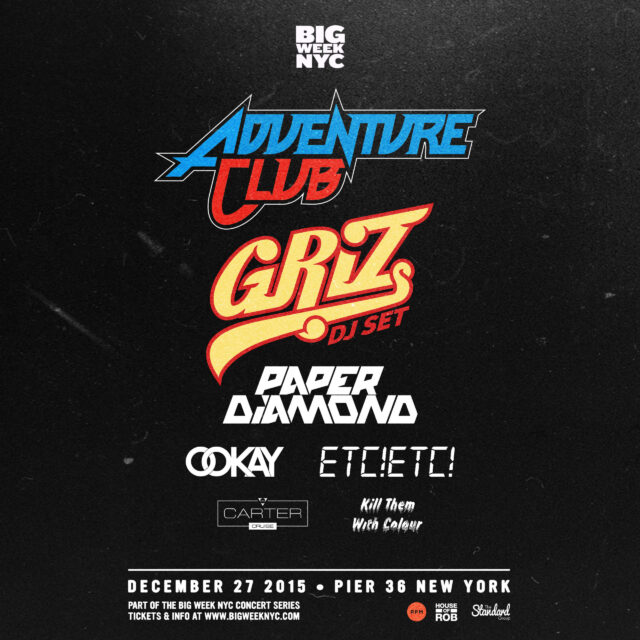 RPM\’s Big Week NYC closes off the year in New York with some of the biggest artists or the year. The artist that were in this years Big Week are Yellow Claw, Dillon Francis, Knife Party, Adventure Club, Griz and more. I decided to go see Adventure Club, Griz, Ookay, ETC! ETC! and Paper Diamonds at Pier 36 mostly because I haven\’t seen any of these producers and I liked the fact that there was a variety of artist going. Also, Flavorus gave this crazy last minute deal of giving tickets out for free the last hours (whaaaat?!), so that was pretty dope.

I knew I had to get there early because Ookay was on around 10. I have been dying to see Ookay since EDC Vegas (I didn\’t get a chance to see him then).  He started out the venue right with trap and a lot of high energy.

Paper Diamonds was also a lot of trap and a lot of high energy. Paper Diamond is definitely growing as an artist, with the help of his collaborations. He definitely threw it down.

I\’ve heard a lot of good things about Griz, that he plays amazing with his Sax, but he played a DJ set for this event. Even so, he was amazing, I was enjoying him so much I forgot everything at that moment and spent it dancing with all my friends.

I\’ve been wanting to see Adventure Club, but haven\’t had the chance to see them. I\’ve always heard good things, but they proved themselves tonight! Adventure Club retweeted something a fan said:

And I\’m pretty sure he was right.

ETC!ETC! finished off the night. I couldn\’t leave the night without seeing him. He did a little b2b with Ookay and they both wrapped up the night perfectly.

Overall, this is one of the most memorable shows of the year for me. Pier 36 was an amazing venue, the vibes that the crowd has was unreal, the variety of artists was amazing, and every single artist killed it. It was worth me having 4 hours of sleep and a sore body… shoot I\’d do it again to relive the moment!