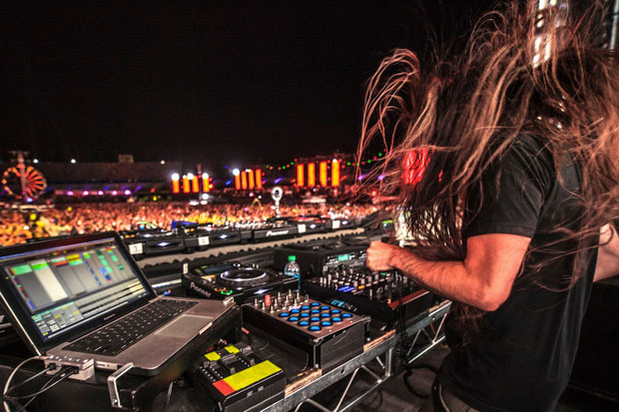 In a well-circulated post that made it across the interwebs late last night, Bassnectar went off on a thoughtful rant of sorts to remind his community of bass heads how important this election is. Before we beat a dead horse any further, it\’s important to note that EDM Chicago does not endorse either major political party candidate.

But the Underground King of Sound does have some unique inputs to offer, including his view of Hillary:

I will be the first to say that I don’t love Hillary Clinton. I feel she is a typical politician, and in addition to making mistakes it’s likely she has made some sketchy backroom deals here or there, just like EVERY politician. But I think she genuinely does CARE about what she is doing, and her general approach is to represent the majority, to bring cohesion to the nation, to support families and civil rights, and to improve and strengthen the country.

As for Trump, Bassnectar\’s opinions are not as light-hearted (to say the least):

Donald Trump is such a blatant cartoonish egomaniac: he is a racist, hateful, self-righteous, hypocritical, deceitful jabroni who behaves like a spoiled child and lies pathologically…He is turning the American people against each other across any line or divide he can leverage: economic, social, racial, religious, gender etc. He brings out the worst in his supporters, appealing to their deepest fears and misgivings, so he can fan the flames of any hatred he can stoke and use it to benefit his own cause…He undermines the strength of our democratic system, echoes fringe conspiracy rantings, is willfully ignorant of science and climate change and has a woeful understanding of global affairs. He does not know how to behave, he cannot control himself, he is brash and loud and insecure, and the team he has around him are the lowest of the low and the worst of the worst: scheming media moguls and tyrants, liars and hypocrites, awful power-hungry people like Rudy Giuliani, Steve Bannon, and Roger Ailes. They are on a warpath to seize control of this very powerful nation, and seek to tear down the existing power structure simply for the purpose of gaining more power for themselves, like a virus.

Finally, Bassnectar points out that all Trump has really done as a platform is re-shift the blame from a failed Republican presidency (e.g. Bush) onto the policies of Obama\’s cabinet, a likely political maneuver.

Most of Trump’s critiques about Obama or Hillary that have any basis in reality are actually critiques about the morbid state of affairs which the Republican Bush administration left us in – like illegal wars, and a staggering debt which climaxed in the worst recession since the Great Depression.

It\’s clear Mr. Ashton dislikes Republicans very much, like most liberally-minded artistic types in the music industry. But he does make well to remind us not to let voter apathy take the reign in our decision over whether or not to cast a ballot this year.

Lastly, even if you chose NOT to vote for a president, you can at least vote on local initiatives, support propositions you believe in, and elect Democratic members of the House & Senate. Congress has the ability to obstruct and even STOP the President from doing what he/she wants, and prevent them from acting on behalf of voters to do what’s in our best interests. (The Republicans have done this blatantly; time and time again obstructing like spoiled children who break their toys so no other kids can play with them.

For more than snippets, be sure to check out Bassnectar\’s full blog entry — which actually contains some very well-supported opinions.