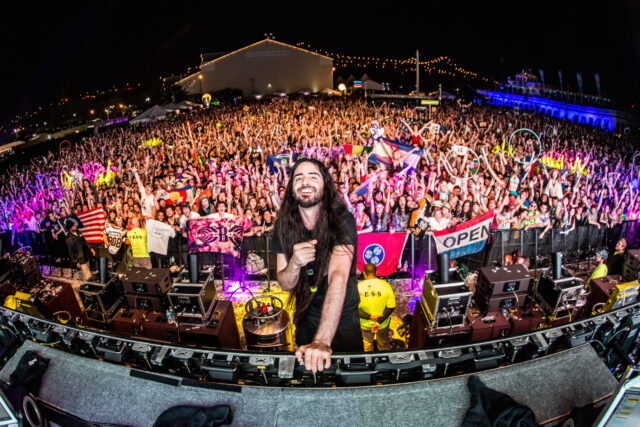 After months of speculation, gossip, and guesswork, the final leg in the annual special event calendar for bassheads has been announced:  Bassnectar will ring in yet another New Year in full 360-degree fashion on December 31st, this time in a fresh new location at the Birmingham-Jefferson Convention Complex in the heart of Alabama.

Touted as one of his premier shows of the year, Bassnectar will be joined by fellow bass tandem The Glitch Mob, as well as past collaborator Paper Diamond and Texas native Psymbionic.

Bassnectar recently commented on his selection of the BJCC in Alabama as the new venue, leaving behind Bridgestone Arena in downtown Nashville, TN, stating on his website that \”it\’s not about only touring in New York, Paris and Tokyo: it\’s about mobbing to the perfect set and setting where the experience can be totally customized and the atmosphere can be co-created.\”

Nectar has no doubt been known to curate an excellent environment for his special events, so fans can rest assured that the man knows what he is doing this time around. Aside from the change of scenery for the end-of-the-year celebration, there are sure to be many more surprises in-store for those planning to make the pilgrimage.  Nectar has repeatedly delivered unprecedented performances while being joined by special guests whom he has previously collaborated with; last year on New Year\’s Mimi Page joined for keyboard and vocals on a VIP version of \”Butterfly,\” two years ago he featured Bird\’s Eye on vocals for \”Falling,\” and opener Zion-I for \”Human\” on the same evening.  Just last week he was joined by hip-hop legends Dead Prez for his re-work of their 2000 track \”Hip-Hop\” at Philadelphia\’s Made in America festival.  Bass heads can surely expect another guest or two to elevate the immersion even further this coming New Year\’s Eve.

Also worth noting is The Glitch Mob\’s production setup.  For the past two years they have toured with a set of six or so drums and touch-response panels known as The Blade.  However, this will be a first for them to potentially unveil a new setup in a 360-degree orientation;  I speak for many when I express my hopes for a new advanced Blade arrangement for their opening set on December 31st.

Anticipation has been building ever since the first leaks of rumors from sources such as the Festive Owl months ago, as well as Bassnectar himself, announcing he would only be performing at a few special events this Fall and early Winter.  Held in as high of regards as his infamous Red Rocks performances, as well as his east coast collaborative event Basslights alongside Pretty Lights (an event for which many are still awaiting an announcement for this year), the New Year\’s show will without a doubt be a massive explosion of sounds both new and old, with tantalizing twists and turns giving more than enough reason for fans to come from miles around to be a part of yet another sensory overload of maximum proportions.  Get ready, \’cause here we go!