Home News ”We Are Your Friends” Movie Announces Tour, Including stop at The Mid 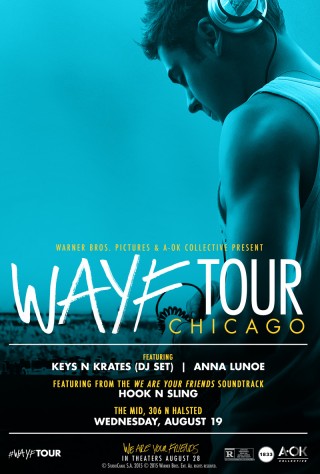 This month, a new movie is being released titled \”We Are Your Friends\” which is based on a 23-year old DJ (Zac Efron) trying to make it in the EDM music scene. This movie will be bringing the WAYF Tour, which includes artists featured on the movie\’s soundtrack, as well as several impressive DJs.  The tour makes eight stops in major cities, six being in the U.S. and two being London and Paris.

Chicago\’s show will be happening at The Mid on Wednesday, August 19th. After a screening of the movie, the event will host Anna Lunoe, Keys N Krates, and Hook N Sling. Entry is free and 21 and over – you can RSVP here.