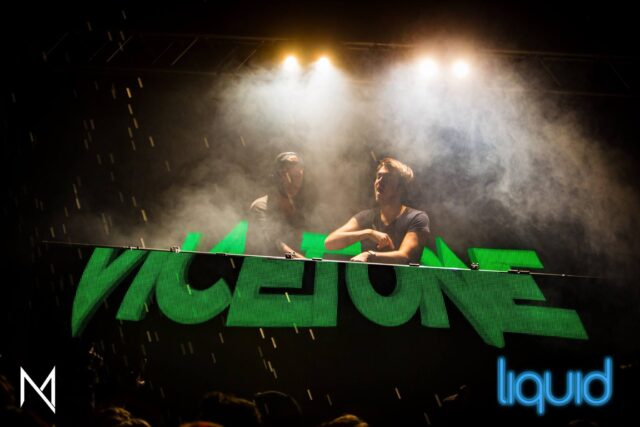 EDM duo Vicetone dazzled last Friday night at Liquid Nightclub in Madison, Wisconsin. EDM Chicago was there to get in on all the Vicetone action. Vicetone delivered a set that could only be described as relentess. Relentless in its energy and pace, the Dutchmen created a sequence of tracks with pounding, booming power. Promoting their recent single “Anywhere I Go,” Vicetone filled a small college club with big sound, delighting and enthralling all.

Ruben Den Boer and Victor Pool took to the booth after local act Milk n Cooks finished. Vicetone began with “Hawt Stuff,” their reworking of the Donna Summer disco classic, and filled the night with a set never lagged. It was so well sequenced, that if they weren\’t talented, it could only be attributed to magic. Incorporating classics like Daft Punk\’s \”One More Time,\” Benny Benassi\’s \”Satisfaction,\” and new classics like Galantis\’ \”Runaway,\” Vicetone created something of a primer in the development of the genre, from European house to banging big room.

The best moment of the night was when Victor left the booth to film the crowd for his Snapchat. Not permitting the good time to end, they followed-up with Dash Berlin\’s brilliant mashup of Zhu\’s megahit \”Faded\” and Vicetone\’s own Ultra anthem \”United We Dance.\” This was a moment of pure magic: emotional, uplifting and powerful. The crowd went wild for this, as they did at the conclusion of the set, demanding another song by chanting \”one more song!\”

For being a college town the size of a small city, Madison\’s scene was positive. Perhaps it lacked the sometimes-jaded sophistication of our own scene here in Chicago, but it made up for that with enthusiasm—and well-poured drinks for cheap. A brief chat following the show provided an opportunity to check-in with Vicetone. Returning to the States from Asia, they were happy to report their Asian tour went well. The Chinese cities of Shanghai and Beijing particularly impressed them.

The anticipation of hearing their hits, like the titular \”Anywhere I Go,\” was satisfied just as much as by the inclusion of their other tracks. This was high-energy music, demanding you to never stop jumping and dancing. Vicetone never let up, never allowed any slow moment, and never included a dull song. Instead, they kept the party going, making sure the party never stopped and the club never was anything other than lit. If such sustained intensity is a measure of success, then Vicetone did succeed last weekend.

Listen to \”Anywhere I Go\” from Spinnin\’ Records now: