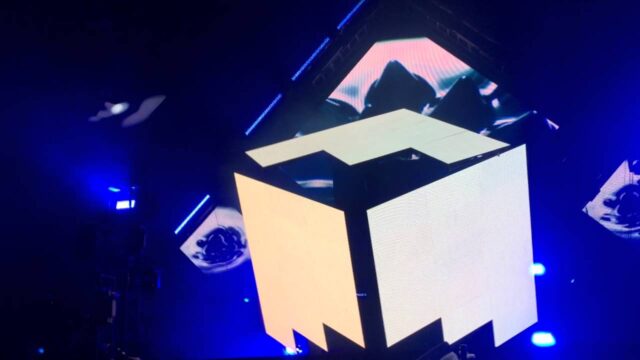 Where there is ying, there is yang. Where there is Dillon Francis, there will be cute cuddly unicorns. Where there are hi hats and 808s, there will be trap music, and where there is Krewella, there will forever will be deadmau5, hounding them every step of their career. This time however, it seems as though Krewella\’s former manager decided to pull some shots, albeit not in the realm of social media, but in their actual live set itself, as has been proven by this damning Twitter video.

Think this looks like a copy paste version of the deadmau5 cube? Well don\’t fret, because you\’re not the only one, and mau5 smacked his elemental prey down into oblivion harder than when Goose headbutted his own cockpit shield.

@deadmau5 yes. This was me. No one else had any involvement in this. No artists or anyone else. The hate, blame and whatever else is on me.

Sure, Krewella\’s manager stepped and decided to soak in all the responsibility, but if you\’re familiar with the EDM world, taking the higher road still doesn\’t save your soul, as deadmau5 continued to go in, playing his ultimate trap card and sending Eric to the Shadow Realm.

.@Erikdisco much less the insane amount of manhours, technology, and development that went into it. It's heartbreaking really.

This didn\’t set well with some in the EDM world, who decided to defend already down and out for the count Erik Fink.

@deadmau5 sorry that we're staying relevant and all you can do is talk shit about people that are progressing themselves. step off

@deadmau5 all you do is hate on people, you make how much a show? Why the fuck does it matter what anyone else does?

Which then let deadmau5 do what he does best

.@DJNickMiddleton you'd probably be pretty annoyed if some plebs started ripping your shit off too. "Step off" he says.

I make a metric fuckton of money at a show, then I use it to employ new and creative stage design. Know what I mean? https://t.co/18T6QJ7YD0

Yo, step off! I ripped it off first.

But at the end of the day, when the sun has set, this was a really tame deadmau5 that actually ended in the most anti climatic way possible.

Oh Erik and I resolved the matter hours ago No worries there. It's just that asshat DJ Twits chimed in for 0 reason https://t.co/Qor448aKS5

1. Never get involved in a land war in Asia 2. Never take a shot at @deadmau5 on Twitter. You won't win either. You will be destroyed.