Home Interviews Between two Worlds: An Interview with tyDi 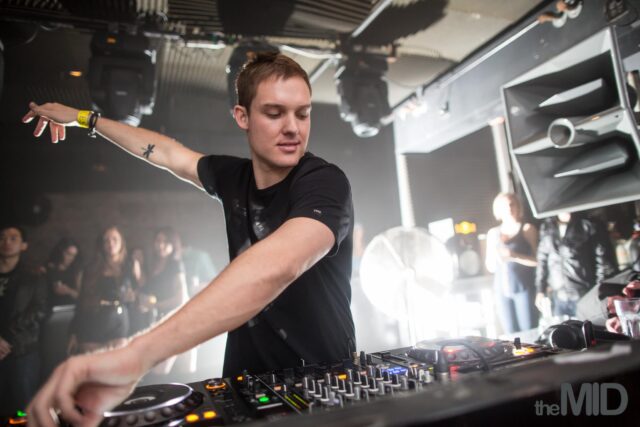 When we interviewed Tyson Illingworth, a.k.a. tyDi a year ago, there was a whole other side to his character hiding in plain sight. He had not yet revealed himself to be the the mysterious identity behind the artist \”Wish I Was\” — a name that was generating buzz around the industry at the time. Now, with two very different projects out in the open between tyDi and Wish I Was, Tyson was able to sit down with us to discuss his outlook on both projects, and his thoughts on the dance music scene as a whole.

EDM Chicago: You’ve got two new songs coming out, “Oceans” and “Only” with Olivia Somerlyn. Is this the start of an upcoming album for you?

tyDi: I am working on an album, and I will have a new album out this year. Whether or not those tracks will be on it or not, I’m not sure. I’m pretty fast when I write songs, I can smash out a song in a day, or a week. Generally when I’m on a roll with a song it comes very quickly. They are potentially on the album, but if I beat those two songs by the time the rest of the album is done, then they might not be. There is an album that I’m working towards for later this year, and as I’m doing that, I’m also slowly getting some songs to the fans. There’s a good chance one of those two songs will be on the album, but there are also a lot of tracks that I’m saving that people haven’t heard yet.

EDMChi: Now going back to “Redefined\”, that track was BPM’s #1 song of last year. Your new alias \”Wish I Was\” also broke onto the radio with the song “Cutting Ties.” Do you think it’s interesting that both tyDi and Wish I Was had success on such a commercial medium despite being so different?

tyDi: It’s super interesting. People like to think that there’s this recipe to writing a hit record, and if there’s one thing I’ve learned over the last eleven years of doing this is that there isn’t one. The thing that has worked for me though is honesty. I’ve tried to force records for radio, and it’s made me almost hate the process so much that I didn’t want to write music anymore. What happened was when I wrote the Redefined album, that was just three years of writing songs that were close to my heart. I wasn’t trying to please anyone, and there was no end game, I was just writing songs. I got really lucky that the record went to #1 on dance radio here in America and was named BPM\’s record of the year on Sirius XM. What happened though was that record did so well that suddenly the pressure was on, and everyone around me was saying “you need to do that again; you need to make another \’Redefined\’.” I felt that pressure so badly that it worked against me. I was spending every day trying to make a song like “Redefined\”, but I couldn’t do it. I started to think that I was done, like a one hit wonder. With all that angst, and aggression, and disappointment in myself, I thought I was done. I started to just write random songs in the middle of the night that I had no intention of showing anybody, at the time I was just doing it for myself, and Wish I Was came about from that. The whole thing came from me saying “I wish I could write, or release this, but it won’t work for radio, or I wish I could do this.” From that, I said “I’m going to make Wish I Was and it’s going to be everything that won’t work.\” Suddenly, out of that came a song called \”Cutting Ties”, which became one of the most played tracks on Sirius XM Chill. So it taught me a big lesson, which is if you try and force records, they won’t happen, but if you do what you believe in, and genuinely love the record, then things work out.

EDMChi: tyDi is different in that stylistically he’s gone from progressive to chillout, to indie-dance. How important is it to you to diversify yourself as an artist?

tyDi: It’s really important, and again it goes back to not forcing something. Imagine you’re a painter, and someone says to you “Here’s the brushes, here’s the paint, but you’re only allowed to paint beaches for the rest of your life.” You’re going to get bored, and you’re going to get so mad, you’ll quit. If I’m pigeonholed to a genre, I’m over it after a few tracks. To me, being able to produce in any genre, and make any type of song is what allows me to feel free as an artist, and that’s what works for me.

EDMChi: Definitely, and now focusing on Wish I Was, what\’s your future outlook on that project?

tyDi: See tyDi is something I’ve done my whole life, and when I’m happy, that’s who I am, I\’m tyDi. Wish I Was developed, as I said before, out of frustration with the industry. I felt like I was a corporate machine, and a product to make money from. So many people were weighing in with their opinions that it affected my work flow and just crashed me. So I ran away from it and became Wish I Was. People told me \”that idea would never work”, but I didn’t care if it didn’t work because I just wanted to make music. After I made Wish I Was, it ended up turning into this monster. Over seven months no one knew who was behind it. Blogs were guessing it could be Zhu or Galantis, so people were writing about it, and it grew into this creature that it is now. People still to this day sometimes think it’s a different artist behind it. I did a radio interview recently, and the interviewer asked me if I had ever heard of “Wish I Was” and when I told him it was me, he spun out. It\’s really cool because Wish I Was has the potential to be something that I don’t even know yet, but I think it’s going to be a band. As a show I think it’s going to have live strings, guitar, a vocalist, and a drummer, because it’s not totally dance music, it’s more ethereal.

EDMChi: As someone who’s had success now in two very opposing forms, tyDi as an exceptional songwriter, and Wish I Was, who brings something new and interesting to the table that breaks the rules, what in your opinion is the state of dance music right now, and what could the scene use as a whole?

tyDi: As a whole, I think dance music went through a phase where it lacked emotion, and was getting repetitive, which is fine to a certain extent because that’s what we dance to, but somewhere along the way it lost its heart. This is just my opinion, but personally I’m a songwriter, and my songs start on the piano without the computer even around. My friends and I will play guitar and write a song like that. We then take that instrumentation and turn it into a dance record. I think dance music got to a place where people were just making a beat first, and then asking someone if they could sing over it. That gives you a really dry result, and what dance music is going back to now is if you were to take away the drums and the synths, you’d still be left with a song that you can sit around and play on the guitar or piano. And this is happening right now. A lot of my fans might give me crap for this, but Justin Bieber’s new records “Sorry\” and \”What Do You Mean”, are insanely good. I was that guy who used to not like Justin Bieber because it was cheesy pop. Then suddenly, he had these new tracks and I thought “wow, these are incredible records.” Dance music is going to a place more focused on songwriting and less on the beats. Personally, Wish I Was is my end game though. Everyone is different, and music is subjective, but to me Wish I Was is the most honest, raw thing I could do as an artist.

EDMChi: Moving forward, now that you’ve experimented with multiple aliases, and continue to experiment musically within them, what’s next for you?

tyDi: I just finished the Wish I Was album; it’s a 14 track album, and not to create too much hype, but it is by far the craziest thing that I have ever made in my career. Whereas dance music tracks are in 4/4, a lot of the Wish I Was tracks are in 5/8, or 7/8. They\’re in weird time signatures similar to those used in orchestral songs like Mozart or Bach, not that I would dare compare myself to them, but I’m trying to bring things into electronic music with Wish I Was that haven’t ever been done before. I don’t think I’ve ever heard an electronic song in 5/8, or 5/4, or 7/8. When this album comes out I’m going to cross my fingers and hope that people get it and understand it. Then I have my tyDi record coming out February 19th called “Oceans”, and then a tyDi album after that, so this year is about some of everything.

EDMChi: Well we’re looking forward to it, and thank you for joining us on the interview.

tyDi: Thank you so much for having me.

Thanks to the Mid for hosting the interview, and to tyDi again for joining us. His new track \”Only\” with Olivia Somerlyn is out now, and can be previewed below. Last but not least, be sure to grab his upcoming track \”Oceans\” with Greyson Chance and Jack Novak this Friday, February 19th!