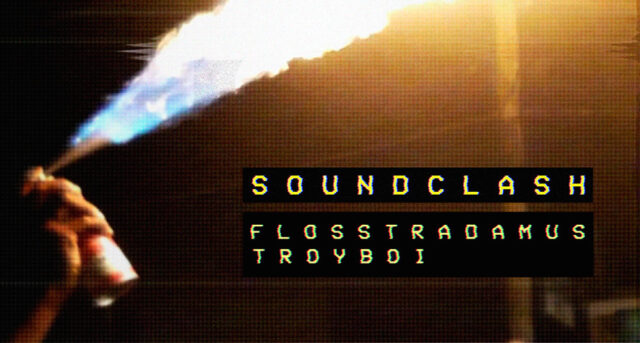 Flosstradamus and TroyBoi have joined forces on the new track appropriately titled \”Soundclash\” and it\’s exactly what you would expect it to sound like; a clash of sounds but in a good way.

The two artists definitely make a good collaborative pair as they both possess similar trap/hip hop music styles.   Flosstradamus has been able to make a name for themselves in the past couple years as two Chicago-based DJs, J2K (Josh Young) and Autobot (Curt Cameruci) who are known for their killer mixes.  TroyBoi who is a producer from London, is more of an up-and-coming artist to the industry here in the US.  He also belongs to the DJ duo SoundSnobz as a producer/DJ with friend and partner icekream.

If you\’re looking for a dark and heavy track, that\’s dripping with hip hop beats and synth sounds, then this is the one for you.  Grab it now here.