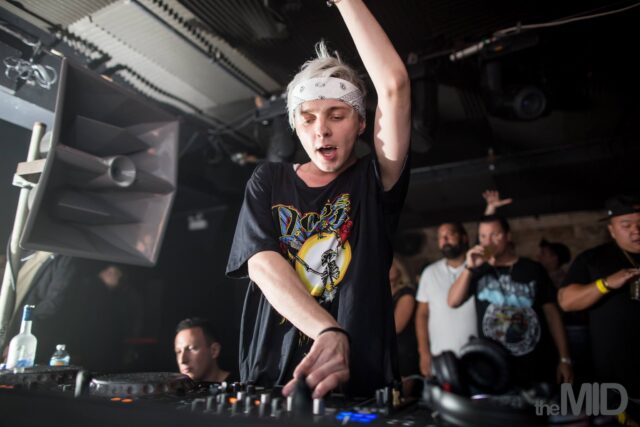 Russian-born producer ARTY has been leaving his mark on dance floors around the globe since 2009. He was discovered by trance legends Above & Beyond and has climbed the ranks in the dance music industry with his prodigious sound ever since, becoming one of the most influential artists in the world.

After making appearances at the hottest festivals and clubs all summer long, Arty had a moment to sit down and share more details about his journey to success, the inspiration for his debut album and future plans with EDM Chicago.

You’ve been all over the place this year. Do you have a favorite?

I think the funnest time that I had, the most amazing time I had this summer, was in Ibiza. I played a couple of shows there in Ushuaia and I think one of the last shows with Avicii. It was a lot of fun playing with him at Ushuaïa, it was the best time we had. There were a lot of friends, a lot of DJ friends as well and the atmosphere on the island. It was just something else.

That’s awesome that you got to play with Avicii as he brought his touring career to a close.

Yeah, I’m really happy about that. It was a good opportunity for me because I’ve known Tim for a pretty long time. I think the first show we ever played together was back in 2011 and since then I’ve made a bunch of the shows with him, so it was really nice to be apart of something big like that.

From what I understand, you started playing music at a really young age but you didn’t start your career until after college.

How did you get into music in the first place?

I went to musical school for seven years. I was learning piano, my main instrument. It gets you a lot, definitely improving how you can hear the stuff but I would say the biggest thing that I got by that time was discipline. It teaches you such good discipline because you become better at timing, you know that you need to practice a lot if you want to achieve really good skills with your piano lessons, piano playing. You need to practice a lot and you need to be confident in what you’re doing so I think it helped me a lot in terms of being a disciplined person.

Did you have something in mind if you weren’t going to pursue music or did you just know you’d end up in music after college?

I think when I finished my musical school, I was still in public school and I went to university the year after that. I was really into the game development. I wanted to become a game designer, working for like the game companies and make the games. That was my ultimate goal but for some reason, I switched to the music as well because I had a lot of friends around me who were DJs. We would listen to music together, go to the clubs and listen to different stuff, trying to find new records and share with each other. Eventually I got myself into the music making because I was curious if I’m capable of doing something like that, after being in musical school and practicing someone else’s compositions.

I kinda decided to challenge myself when I was in university for the first year and it just became pretty interesting for me, pretty challenging. And you know, being in university it’s the same thing again and again and again. You study the new thing, going for the same routine every year. While with music, there is way more creativity. Every other track is something else, like you can approach it with different ways. Just for me it became a really interesting and amazing process, where I choose something more than just study something.

How did you break into the industry then? Where did you go from there?

I was just making music and sending to the labels. Some of the labels would respond and some of the labels would not respond. I think one of my first came out on Enhanced Progressive, an independent trance UK label at that time and we got a lot of support from big DJs, from Armin, Paul van Dyk, Above & Beyond. And that’s how everything went together. It got a bunch of requests for remixes, they really liked what I did with the remixes because it was a completely different approach than the original song and more supports from there. That’s pretty much how I started.

What artists are you inspired by?

Well, there are a lot of new artists that have amazing vision for the music. They’re trying to push the boundaries and come up with something new. Every year they’re trying to push the limits a little more, getting out of the comfort zone and bring something new to the scene. That kind of artist I’m looking up to, like Porter Robinson with his album that came out in 2014 and Mat Zo for me was always that kind of musician, a genius who can produce incredibly amazing and weird music at the same time. Skrillex is a beautiful example of what you can achieve with making dubstep for three years and be really innovative and making the trap music after that. And the pop music while being super successful with Justin Bieber like he did, became number one in so many countries. This is really inspiring because all the artists are capable for so many things and they can push the boundaries, styles and I really like that kind of thing. That inspires me not only in a musical way but a personal way as well. Like, you can get some sort of experience out of it.

There aren’t a whole lot of big Russian producers right now. Do you think that is changing or will change eventually? Do you see more coming to the scene?

Not really, not in a big way. I think the scene is kind of stagnated and you know, it’s not moving further because the club scene itself, the festival size and the club size and everything else are not that greatly developed. There are not that many international artists coming because if you compare the amount of festivals that you have in America and you compare the amount of festivals that you have in Russia, it is completely non-comparable. We might have like two, three franchises going on every year, which is obviously not enough to develop a really strong dance community that support each other. I think this is one of the biggest problems for the Russian dance scene because a lot of people are not aware of that apparently.

It just matters how passionate you are about the music and what you want to achieve. All doors are pretty much open. Nobody’s gonna help you but at the same time, it’s not crazy hard to accomplish certain things. Like if you have good production skills and can send to the record label…that’s how you start your career. But apparently, a lot of people kind of have their own doubts and it’s really hard to get rid of those doubts because dance, in itself as I’ve said before, is not developed that well. Hopefully one day it’s going to be changed but so far, we have what we have pretty much.

In the meantime, you serve as the most well known Russian producer. How does that feel?

I’m proud to be Russian because that’s my home country, that’s where I was born and that’s the country that gave me everything so it definitely feels good.

Your debut album “Glorious” came out last year. It’s deeper than some of your other music with a pleasant balance in styles. Where did you get that inspiration?

I was working on that album for two years so it was not just inspiration from one place, one time. A lot of tracks that recorded, that I would record before that had already production…for instance, in the beginning of 2014, I would say is like 8-14 track already but production would change every half of year. I would come up with a new sound and with a new idea because I wanted to make sure that the album sounds like a piece of music from me. It’s a story, it’s connected and there’s line for every track with what’s happening in the scene. So I think in the last two years, from 2014-2015, there was a lot of style changes and a lot of new things came out so that’s been pretty inspiring. The future bass theme is really innovated electronic music, it’s inspired me to take a different approach with my album, and especially you can hear closer to the second half. I’ve been influenced by more modern music but at the same time, I wanted to keep it personal like an intimate album so it doesn’t’ go all over the place and you show the bound between each track on the album.

Do you plan on doing another album?

No, I’m done with the albums for sure. It just takes a lot of effort and a lot of time. I think it’s pretty selfish a little bit to take two years and not be on the scene for such a long time. You need to give something to your fans, they want to make sure you’re alive and you’re making the music. You’re something they’re looking up to as well so I also think the time right now, the time has changed especially since last year.

I think people will now focus more on singles and I think with every single you can do something else. You can try something new, some new genres because the music that I’m working on is so diverse. I almost finished a track that sounds super old school from 2010. It’s like 120 BPM and kinda, really trancey. But on the other hand, I’m working on pop stuff which is like 90 BPM, 100 BPM so it’s really diverse music. Now it’s like, at least I feel, it puts dance music in a position where you can give to the people whatever you want to give, as long as it reflects your personality and the artist side. As long as the music is honest, they gonna accept it which is like the most amazing thing because it keeps you creative as well. I personally do not see myself stuck in one genre for the next 4 or 5 years, I want to try out different stuff, different sounds, try out some different genres.

Do you have any future plans we can be looking out for?

Yeah, there’s going to be a lot of music coming out. I have 4 or 5 tracks almost ready right now and so I’m excited to see what people are going to think about it. A lot of big collaborations as well but I can’t really talk more about it since it’s not confirmed. You’ll hear about it in the next couple of months.