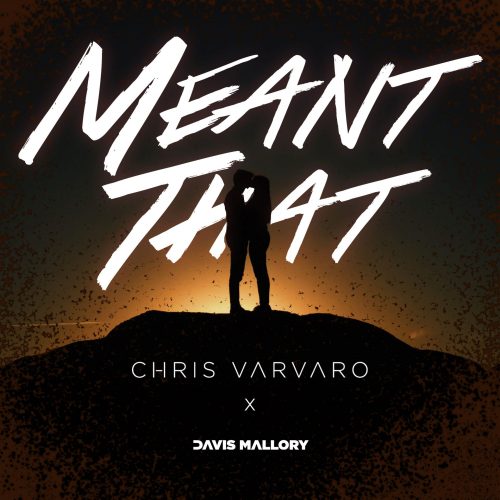 A self-taught musician and instrumentalist, Chris Varvaro has released a new soulful single titled Meant That featuring Davis Mallory. The song paints a personable portrait through a multi-genre beat and soulful vocals by Davis Mallory. The two collaborated in a very organic way and the results are clear.

The euphoric sustained synths and youthful vocal melodies capture the best parts of both talents, a feat easier said than done. With Mallory incorporating personal life experiences into the narrative, something about it quickly resonated with New Jersey producer Chris Varvaro, and it was these moments the two knew they were onto a musical treasure.

“I wrote “Meant That” about my ex who I met in Israel summer 2018. We literally went one week never being apart after we met, and then I had to fly back to the USA. We made plans to meet in New York City (that ultimately never came true). The lyrics say “made plans to meet up in Central Park, hoping that it comes true” I did have a hard time falling asleep – after we said goodbye and I flew back to Nashville with the lyrics “don’t like to sleep, if you’re not by my side.” I really had a hard time being apart after we left, I was so in love and suffered once I returned not knowing when we’d see each other again, or how to make a long-distance relationship work.”

“I think I speak for both of us when I say “Meant That” is a very special song. I remember this summer I was in the studio and I got a text from Davis with just the vocals. I was blown away by the story and I immediately heard the song start to unfold in my head. I was in a relationship at the time of writing this and I was really happy, so I wrote with a lot of the emotions and romantic energy I was feeling with that person to get the mood just right. This song means a lot to me and serves a universal message about love, falling hard, and being hopeful – something Davis and I are both all too familiar with! We hope our message will resonate with our listeners on a deep level and make an impact on their lives.”