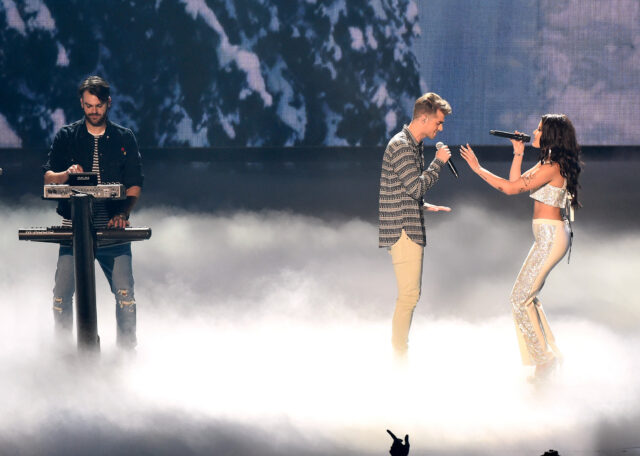 It seems like no matter where you turn, some song by The Chainsmokers is playing in the background. Drew Taggart and Alex Pall, the self proclaimed owners of the \”Frat-Bro\” label, are the minds behind the musical duo. That one song that goes \”Baby pull me closer in the backseat of your Rover\”, yeah that just hit double-platinum. \”Closer\”, behind \”Roses\” and \”Don\’t Let Me Down\”, have all hit double-platinum in 2016.

“Only Justin Bieber and Drake can hold a candle to what we’ve done,” Taggart tells to Billboard. Arrogant but hey, it\’s true.

Though \”Closer\” has had incredible chart success, the live performance featuring Halsey at the VMA\’s kind of sucked.

It sounded like shit. We were told my voice was going to be mixed well, but there was no reverb and it was way louder than the track for the broadcast. I was set up to fail. Nearly every other person lip-synced it, and we knew because we had them in our ears. So now I know why you lip-sync.

Taggart, who\’s voice fell flat during the live stint, didn\’t seem to be too discouraged. He posted a photo on his Instagram giving his two cents about the performance.

I like dis pic. I was nervous. This was my first time singing live really ever n it was on tv n Kanye was watching. I had to remember to play to the camera and then to the audience and then to Halsey. The curtain came up. Fuck. I forgot everything I practiced. I wasn't ready for it, but that's life. Life throws you into situations you aren't prepared for and you have to figure them out. Don't back down and don't ever give up. Also, CLOSER went double platinum today making it our 3rd double platinum record of 2016. Thank you guys for being a part of this journey ❤️

Though Taggart said he was given more than enough congratulations after the performance, his mom eventually hit him with \”make sure you stick with the singing lessons.\” And he is.