Home Food How America has Embraced Food From Around the World 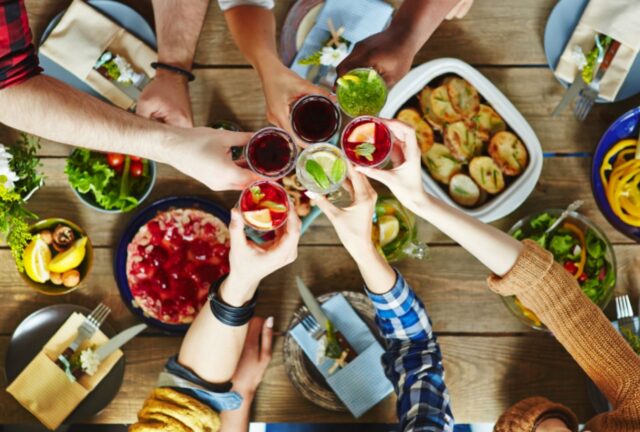 America has a love affair with food from juicy steaks to family BBQs. Cities and towns across the States are full of restaurants and cafes selling all manner of food from every cuisine you could think of and then some.

In 2018 there were over 660,000 restaurants in the States employing 11 million people and eating out in restaurants or having takeaway remains popular with all age ranges.

With so many different types of food available how has America embraced different cuisines from around the world?

Favorite American foods that are really from overseas

The strange thing about a lot of food in the states is that much of what most of the world may view as typical American fare originates from other countries and as you will see below the opposite is also true. Just look at the following foods that do not originally come from the States:

There are many more but if you asked the average person where these foods came from you could expect the USA to be the answer. This is one example of how America has embraced other cultures without even realizing it. Hamburgers are from Germany, BBQ likely has its origins in the Caribbean and Ketchup is from Indonesia. Apple pie, that quintessential dessert is from England.

What foreign foods are popular in the States?

Mexican is an extremely popular cuisine in America. That is followed by Chinese, Spanish, and Japanese cuisines, but the most popular foreign food remains Italian. Pasta and especially pizza are extremely popular all across the states with around 80,000 establishments for pizza alone.

Japanese remains popular with sushi being seen as a healthy option when dining out or having a takeaway. Japanese food first really took off when the Benihana chain was launched in 1964 by Hiroaki Aoki

Which food seems foreign but is actually an American invention?

Much like the British have Anglicised Indian cooking and even invented their own dish in Chicken Tikka Masala, the Americans have also dabbled with foreign cuisines. Some are well known and most Texans will tell you that chili con carne is from the States as is chimichanga which it is claimed was first made in Tucson, Arizona.

Here is some more food for thought:

So why have these meals been invented in the States and why do others thought to be American actually come from overseas?

America is a diverse country

The States has a large population and there are people from all over the world calling it home. When someone settles in another country it is normal for them to crave their own food and often dishes or approximations of recipes get made. So with Chinese, Italian, Spanish, Mexican immigrants arriving in the States so too did their food.

There are more than 50 Chinatowns spread across America and of course, New York has Little Italy. Different nationalities have their own quarters in cities and restaurants selling their native dishes will spring up.

Can you cook these sorts of dishes at home?

Absolutely, of course, some dishes take more practice than others but there are ways to make things easier. Take for instance Teriyaki chicken. If you wanted to make this at home you could find the recipe at corriecooks.com and with the help of an Instant Pot have it ready in the time it takes for a takeaway to be delivered.

If you have a love of foreign dishes then with the social distancing restrictions making life hard, now is the perfect time to take up a new hobby and learn some new recipes. Instant Pots are the ideal way to cook many different cuisines with a minimum of fuss.

What type of cuisines does an Instant Pot lend itself to?

Because it is a multi-cooker and has numerous features it can cook almost anything you can think of. Because it is a one-pot cooker it suits curries perfectly making it useful for Thai, Indian and Vietnamese curry for example. Of course, you could broaden your curry horizons and try Lao, Burmese, Malaysian, and Japanese curries instead.

Noodle soup, sushi rice, char sui, pork dumplings, and congee can all be made in the Instant Pot with no problems. If you fancy something more American then it can also handle General Tso’s chicken, chop suey, and chili. In fact, it is perfect for slow cooking chili con carne for intense flavors or for making a super quick version for when you are time poor.

Just how popular is eating takeout and in restaurants?

Obviously the pandemic restaurants are not as busy and you may have difficulties getting food delivered too. However, this doesn’t mean that food from outside is losing popularity; it’s just not as simple as it was. Americans love to eat out and stats tell an interesting picture of just how popular this simple pleasure is.

Between 2009 and 2019 the amount spent on food expressed as a percentage rose by over 4%. The actual percentage of money spent on food outside the home in the USA was nearly 55%. That means more money was spent on takeaways and restaurants than it was on home cooking. Americans are sociable people and with the wide range of restaurants available perhaps this isn’t so surprising.

The restaurant trade and the economy are closely tied. 4% of the US economy is accounted for by the restaurant industry alone. However, in times of lockdowns, it can be difficult to get out so if you want to keep eating your favorite American or non-American foods then cooking at home is a great way to do it along with learning new recipes. Find interesting ideas on the internet and invest in an Instant Pot and soon you could be eating Thai red curry as if you were sitting on the side of the Chaya Prao in Bangkok.

Choosing the Right Formula For a Baby With Sensitivities

8 Best Foods for a Romantic Evening

How Coffee Is Grown in Different Countries

Introduce Fitness Into Your Life with Organic Barley Tea

8 Best and Worst Foods for Your Teeth